When AG first got wind that Barney Adams was part of a new business venture, this one centered around the art of putting, the staff could frequently be heard using the word listed above.

We began to wonder how the Stability Putting shaft could possibly be an improvement over the traditional steel shafted putter. That being said, we were certainly willing to take a look at some data, take the stability shaft for a spin and give our thoughts on whether it’s worth your time and money.

Last month, I took a trip up to the Breakthrough Golf Facility in Richardson to take a look at their new putting lab and have a chat with Blair Phillip, who walked me through their process of fitting golfers for their new putting system. Philip, who once worked for Yes! Putters and has been in the industry for a quarter century is the brains behind the Stability Shaft. 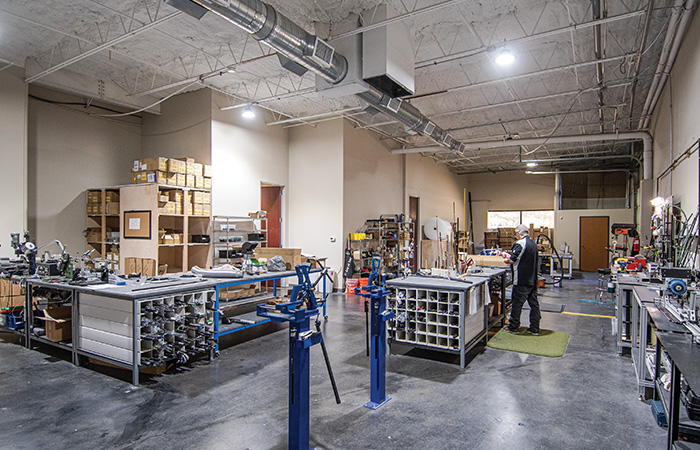 I was tested with my current setup, a Scotty Cameron Futura with a Super Stroke 5.0 grip. To my surprise, Mr. Philip told me I actually have a pretty good stroke. I was consistently returning the club to almost square at impact, which told him (and me) that I could probably use some work on my green reading skills and speed.

What does the new Stability shaft do, you may ask? Well I asked Philp that very question and requested he give me the broad stroke layman’s way of describing it.

“It will help players return the clubface to square more often,” Philip said.

Sounds simple enough, but there is much more than goes into the thought behind the product.

“People have worked on driver shafts for decades using different high-quality materials. We’re using that same philosophy and applying it to putting. I couldn’t figure out why the industry hadn’t focused more on putter shafts, especially considering putting is 46 percent of the average round,” Philip added. “Our goal is for golfers to better understand how putters work and how a stroke reacts to different putter styles. It can be an eye-opening how quickly the roll can improve using the new technology and data.” 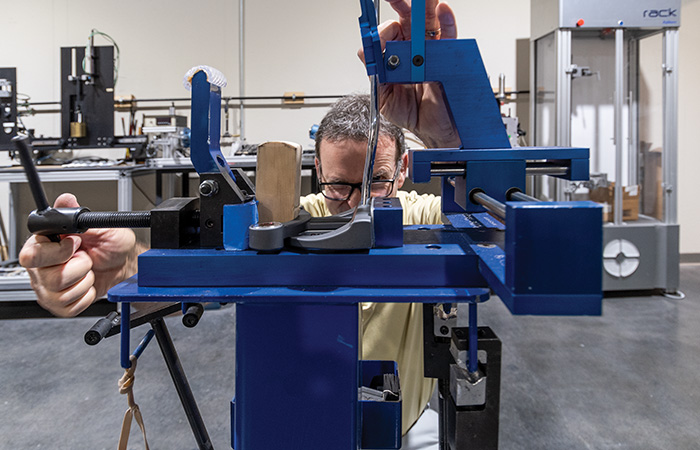 Obviously, that’s a good thing for any golfer, from the high handicapper to the professional player, many of whom have been through the doors a BGT to see if this new technology could help them hole some more putts.

“Tom Watson came through here not too long ago and we set him up on the monitor. I truly think if he had access to this technology in his prime, he might have 20 Majors,” Philip said.

The now 80-year-old Adams has long been an innovator in the golf industry. If the name rings a bell, it’s likely because he was the brains behind the Adams golf brand, that revolutionized the game in the 90’s with their Tight Lies line of fairway metals. If you aren’t familiar with the Tight Lies, I like to think of them as the first generation of “hybrid” clubs. Now they weren’t quite the hybrid we see in today’s game, but the heavier, low center of gravity clubs they produced meant players could feel confident hitting the Tight Lies from just about anywhere. They were great off the tee, from the fairway, or even out of rough or fairway bunkers. Now in semi-retirement after selling the Adams brand to TaylorMade Golf in 2012 for a reported $70 million, Adams is living the good life in Arizona, but he still has his fingers on the pulse of the golf industry and remains an avid player and is continues to be active with The Ryan Foundation benefiting MPS and Orphan Diseases, and Folds of Honor, which supports military families.

When Philip hatched the idea for the Stability Shaft, it was a great match for Adams, who still wants to be known as one of the most innovative minds the industry has ever seen.

“We have a many tools and technology at our disposal, so this is just a natural evolution of our business. It’s an interesting experience and a great tool for all golfer’s regardless of skill level. After all who doesn’t want to putt better,” Adams said in a press release earlier this year.

The concept is simple, layers of carbon fiber with the addition of an aluminum insert in the shaft helps reduce torque, and there is data to support that claim. Essentially, less torque in the shaft helps keep the clubface square at impact. BGT says it limits unwanted movement by 25% and reduces torque by almost 50%. This ultra-stiff shaft is made specifically to help you stroke the putter more consistently. 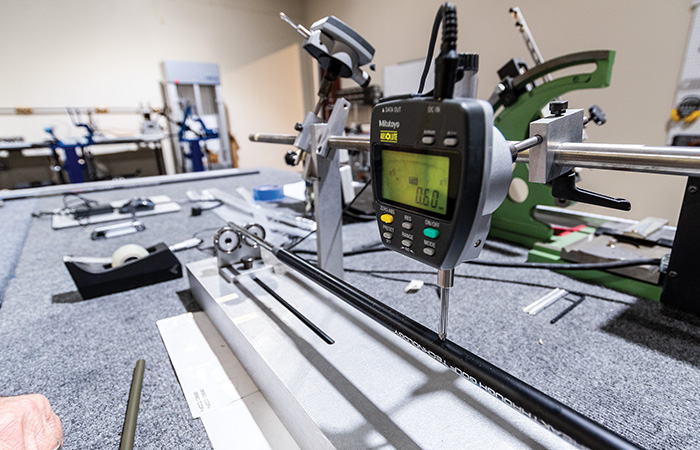 Although the BGT headquarters is a far cry from the R&D facilities we’ve seen with some other major manufacturers, it has everything Philip needs to provide a comprehensive putting analysis. The main tech used to diagnose a stroke is the Quintic Putting Ball Roll software. Dots are placed on the putter head and golf ball, and the player makes a series of strokes. From there, the system tests lie angle, loft, and golfers will receive information on the ball after impact, including ball deceleration, ball rotation, launch angle, forward rotation, backspin and cut/hook spin.

Again, I use the word skeptical… but after just 5 strokes on the monitor, the soft-spoken Philip looked in my direction and had some immediate feedback.

“We can absolutely help you make more putts,” he said.

Without getting too in-depth and boring you with numbers, the amount of loft on my putts after impact was a bit high, meaning the ball was jumping off the face for a few inches before grabbing for the turf and beginning to tumble. This slight deviation can definitely have an impact on the number of putts I am making.

Cue up the Stabilty Shaft. The process was actually quite simple to transform my Scottie to its new look. Philip took my existing shaft, cut it at the necessary length from the club-head, and then retrofitted it into the new shaft. He then bent the shaft 1-degree flatter to assure the head wasn’t helping the ball skid immediately after impact. 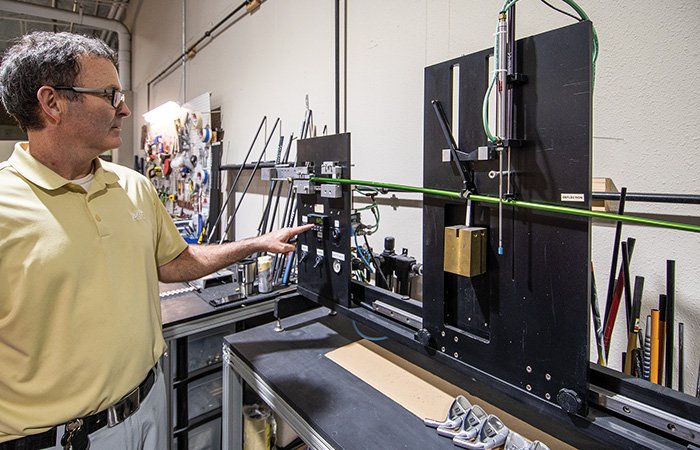 The whole transformation took about 15 minutes and back to the Quintic I went. To my surprise, I could see a difference in the way the ball was reacting off the putter. The ball now rolled pure right off the face. I could see there was an improvement in just a few strokes. Suddenly the skeptic in me wasn’t quite so pronounced. I began to believe that Adams, Phillip and company may be on to something here.

BGT offers three separate diagnostic sessions for your putting. The “Putter Tune Up” which takes your existing setup and fine-tunes it using your stroke. This one doesn’t include the new shaft but could definitely help your game if you aren’t ready to make the commitment to a new setup. The second option is the 60-minute session that does include the shaft being installed and the third option is the full 90-minute session with Philip which is the most in-depth analysis they offer. The hour and a half “Master Fit” also comes with the Stability Shaft fully installed.

In the weeks that have passed, with the holidays and the weather, I haven’t played much, but I have been rolling a few here and there on my putting mat at the house. Hard to really tell when it’s nothing but flat 10-footers, but at the bare minimum I’m feeling more confident about my stroke and the new putter feels solid. I am really looking forward to testing the new setup in some full rounds in the new year. Philip even told me to pop back in after a couple months and they would re-test my numbers after I had gotten used to the shaft. I, and the other members of the AG team are looking forward to that data.

“We have a many tools and technology at our disposal, so this is just a natural evolution of our business. It’s an interesting experience and a great tool for all golfer’s regardless of skill level. After all who doesn’t want to putt better,” Adams said of the new technology.

The data definitely supports their claim, but the proof is in the pudding. Can the Stability shaft improve your overall stroke? It would appear so, but at the end of the day, the player is responsible for a whole bevy of outside factors. Reading greens, speed on putts and a consistent move on the ball.

As I become accustomed to the Stability Shaft, I will report back. Look for an update in my Letter from the Editor in the spring. Will this be the year of the flat-stick? That’s to be determined, but the new tech certainly couldn’t hurt.