Aahhh Will, Will, Will. So young, so talented. And now, just as you turn 26 and have had your very first PGA TOUR victory, you are needlessly suffering from not just one, but two, herniated discs in your low back.

Needlessly? Well golf injury research has existed for decades, and the movements and positions that cause low back pain in the golf swing are well known. Did no one ever tell you that? That a joint is only as strong as its weakest link (some of the injury-prone structures in the lumbar spine being the intervertebral discs, the tiny facet joints and the paper-thin pars area of the vertebrae)? Did no one suggest to you that the golf swing should be designed around the constraints of human-body capabilities, rather than a golfer’s body being moved into some ever-evolving, never-researched, completely unproven “requirements” of the golf swing?

Or, like many other young golfers, did you simply believe you could power through it because of your flexible, wiry, body-type and youth? A lot of casual observers have commented on your amazing flexibility that allowed you to have considerable downswing rotation and side bend, and some have warned that this might cause injury down the road (see a Youtube video by Mike Wilson titled Will Zalatoris Golf Swing [Analysis 2021] on 12 Apr 2021). 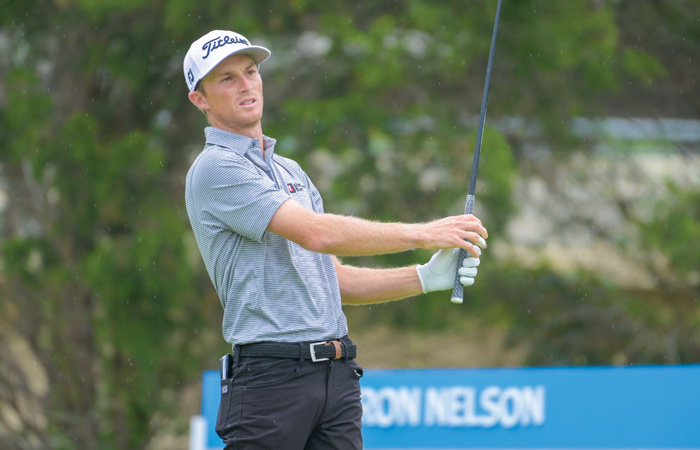 The following is a plea to all talented young golfers, including yourself, Will, to please understand what the human body is and is not capable of, and tailor your own golf swing around that. Ideally, any golfer hoping to spare his/her body from injury should stay within the limits of motion the body is capable of, because even exercise does not help to prevent damage to some tissue.

What is the lumbar region of the spine designed to do in normal human upright standing? The discs and facet joints allow significant forward flexion, some lateral flexion (side bend) and limited horizontal rotation (Gluck, Bendo, & Spivak, 2008). To put some specific numbers to it, healthy young males of approximately your age, Will, had (in a study by Tojima, Ogata, Yozu, Sumitani, & Haga, 2013), a lumbar spinal flexion (forward bend) of 50˚, extension of 24˚, lateral flexion of 16˚ and an axial rotation of 8˚.

It becomes immediately apparent that this region of the body is designed for limited side bend and very little rotation. The side bend results in shear forces being applied to the lumbar spine, while the rotation applies torsional loads. All loads increase when the body is moved at great speed and over thousands of repetitions. Even forward flexion, for which the lumbar region has a 50˚ or so capability, becomes problematic when that position is maintained during the considerable speed of the downswing. That is because the strong (erector spinae group) muscles of the back must pull down to prevent the effect of gravity, which causes the spine to experience compressive loads.

Thus, while there are many causes of injury, the biomechanical imbalances that increase injury risk in the lumbar region of the spine are excessive rotation, side bend, forward bend, a combination of those, and even the X-Factor (requiring relatively little pelvic rotation and far more shoulder/torso rotation in the backswing). 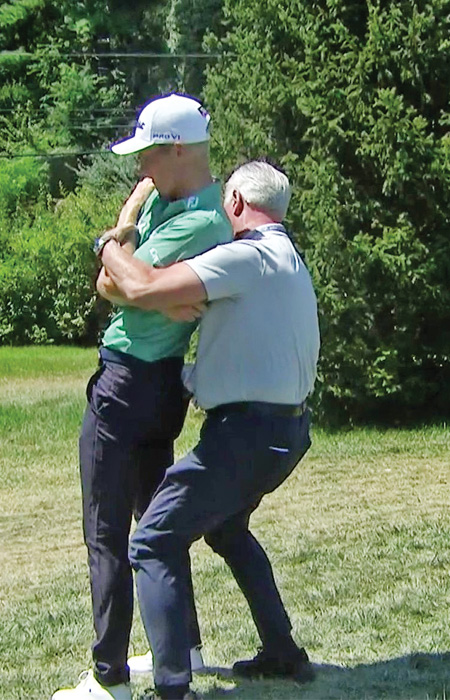 Let’s add some detail to the broad strokes just outlined. In one early study (Sugaya et al., 1998), it was discovered that the main contributing factor for lumbar degeneration was a combination of the side bending angle and rotational velocity of the torso, which the authors termed the “crunch factor.” The crunch factor increases during the downswing and reaches peak values just after impact. Subsequently, Cole & Grimshaw (2014) opined, based on their research, that lateral bending velocity combined with rotational velocity might be more predictive of injury. Then, from a study comparing cricket-fast bowlers with and without low back pain, it was suggested that it was the side bend rather than shoulder counterrotation (the angle between the shoulders and pelvis, similar to the X-Factor in golf) that would be more likely to cause pain (Stuelcken, Ferdinands, & Sinclair, 2010). From your own swing, Will, with so much downswing pelvic rotation and torso side bend, you might find that this makes sense.

On the subject of the X-Factor, it requires a maximization of the hip-shoulder separation angle in the backswing and tends to torque the lumbar spine. It has thus been implicated in low back pain in golfers (Gluck et al., 2008). As you, Will, have considerable hip, as well as shoulder rotation in your backswing, this may not be as big a concern for you.

Now, while we do not know anything about the lumbar level of your injury, its extent, or the location, Will (a wonderful video by Dr. Ebrahim, Professor and Chair of the Department of Orthopedic Surgery at the University of Toledo Medical Center gives a lot of detail: https://www.youtube.com/watch?v=NeBHH60rGFQ), an educated guess would be that your injury is posteriolateral i.e. slightly right of center, given that you are righthanded and have excessive side bend on that side, as well as considerable spinal rotation. The guess is supported by the Sugaya et al. (1998) study of right-handed golfers which found that 51 percent had right-side symptoms, 28 percent left-side and 21 percent had central symptoms. They also stated that those having right-side symptoms felt pain during impact and follow-through. Sound familiar, Will?

So, if your lumbar disc injury is on your right (trail) side, Will, we can add in some further, more detailed, brush strokes. While disc herniation in general can be ascribed to a combination of compression, torsion and lateral bending (Lee & Lee, 2017), the lumbar disc is fairly resistant to compression alone, unless it occurs in an older population, but a combination of compression and rotation can cause most spinal injuries (from a 1960 study by Roaf that placed loads on cadavers). In healthy discs, as yours surely were, Will, one group of golf researchers (Gluck et al., 2008) found that herniation typically takes place as a result of lateral bending combined with compression and torsion. Moreover, Lindsay and Vandervoort (2014) mentioned that, besides side bend, compressive loads in the golf swing, which are higher in professionals than in amateurs, may also cause disc herniation, because such loads are greater than those seen to cause disc prolapse in cadavers. Compression has been said to be a large force on the lumbar spine and has been seen to be greater in professionals than in amateurs (Hosea et al., 1990).

Other studies of interest were those that compared spinal movement with different clubs or compared them between golfers with and without low back pain. In healthy professional males it was seen that the 7-iron had significantly greater forward flexion as well as trail-side lateral bending velocity than the driver, while the driver had significantly greater target-side axial rotation velocity than the 7-iron (Lindsay, Horton, & Paley, 2002). Thus, it could be said that both clubs were able to impose considerable loads on the spine. Beware, golfers!

Two groups of researchers who compared golfers with and without low back pain found further interesting, little-known, facts. One (Lindsay & Horton, 2009) found that the only significant difference between the two groups was that the quantity of lead side bend (presumably at the top of the backswing) was greater in those with low back pain. These researchers also found that those with low back pain had significantly greater forward spinal flexion at address than those without – about 12˚ of difference on average. Ouch, Will, you have quite a bit of forward bend! Additionally, they observed that toward-target rotation angles during the forward swing, compared to golfers’ own neutral (i.e.in upright standing) angles could be, on average 99.6 percent in those without low back pain but went up to 116.4 percent in those with back pain. Could their pain have been triggered by more rotation than the lumbar spine is capable of?

The other study comparing golfers with and without low back pain (Tsai et al., 2010) measured ranges of motion of the trunk and spinal moments at the L5-S1level in all possible directions of motion. The only significant difference they found was in the quantity of rotation toward the non-lead side (presumably referring to end-of-backswing rotation), and you do also have considerable backswing spinal rotation, Will.

So, Will Zalatoris, a phenomenal young talent whom we hope is back on the PGA TOUR soon, please keep in mind that there are known causes for many injuries in golf (a detailed article may be seen here: https://journals.tdl.org/jacc/index.php/jacc/article/view/201901/pdf). Finally, if, as Mike Wilson mentions in his Youtube video, you still have a two-way miss, it would be important for you going forward, to research all possible alternate methods of swinging the club that would reduce your injury risk while also improving your performance.