The golf fitness industry is an ever-expanding one, with everyone from your neighborhood collegiate golfer to well-known physical therapists and chiropractors being full-time golf fitness trainers. What is not clear is whether all golf fitness trainers perform any type of fitness evaluation prior to prescribing exercises to an individual golfer and, if so, what type of assessment do they use?

There are many types of exercise that a golfer can perform, which can broadly be performed in three phases: stabilization, strength and power. Exercises can have physiological and physical benefits, while there are also those that specifically help to improve some aspects of performance, such as strength, power, endurance, flexibility, speed, agility and balance. Which of these performance features does golf require, and what choice of fitness training such as stretching, cardio, core, balance, plyometric, agility/quickness and resistance should they be prescribed?

What better person to ask than Dr. Zach Gould, who is a strength and conditioning specialist with a Ph.D. in the subject, and used to be an amateur golfer who, while competing, had a +4 handicap and played in the junior Ryder Cup alongside professional stars including Rory McIlroy, Danny Willett, Tony Finau and Ricky Fowler, amongst others. He believes his career could not get to the next level due to poor coaching, which is why he became passionate about understanding the physical and biomechanical demands of golf. It is what made him want to focus on strength and conditioning so as to help other golfers and ensure they did not experience the pitfalls he did. Gould also has a CSCS personal trainer, sports massage and some rehabilitation qualifications. 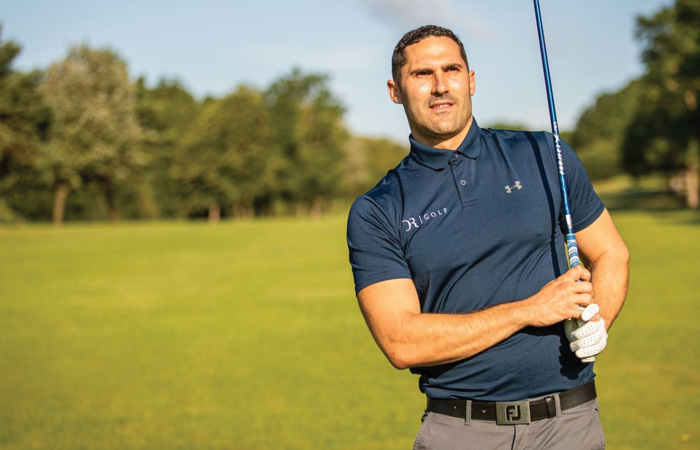 Importantly, Dr. Gould is the developer of a unique Golf Movement Screen (GMS), which he was able to put through various tests as a part of his Ph.D. thesis. Why did he feel the need for a new movement screen and what does the GMS offer? At the time of his thesis, the only golf-specific screen was the one developed by the Titleist Performance Institute (TPI), which had minimal research to prove whether their claims were true. The TPI screen was only tested in 2014 (although probably developed soon after TPI was founded in 2003), when only three of its 13 exercises were found to have any correlation to technical swing performance. The average age of the 36 participants of the study was 25.4 and their mean golf handicap 14.2. Thus, as stated by Gould in one of his research publications, 10 of the TPI screen movements tested showed no relationship to swing mechanics. Gould’s own GMS was tested on 62 golfers ranging from 11 to 26 years (average 15.4 years) with a mean handicap of 4 – thus perhaps a younger, larger, group with lower handicaps.

The GMS testing showed that the basic balance test was perhaps most important for many important aspects required in the golf swing, such as being able to rotate correctly around a stable pelvis for a better X-Factor motion. It was also seen that the squat is important enough to be incorporated into any golf fitness program, while the side plank test of the GMS was an indicator of the very essential trunk stability. Overall, it was found that the GMS has both good validity (it measures what it is supposed to measure) and excellent reliability (the ability for consistency in measurement by a variety of testers) and, thus, is a good screen to use for golfers who wish to be prescribed specific exercises in keeping with their golf goals. Someone with a high GMS composite score (from its 10 tests) would have good X-Factor and spine control, while someone with a low score would need more work on their postural control, mobility and stability.

Exercises that help with trunk control, balance, squat technique and core stability would be important for better driving performance, and those that improve both power and movement competency would perhaps help golfers the most.

Gould has also assessed physical tests, upper- and lower-body power and rotational power tests, which he found were far more correlated with distance in golf than a mere movement screen. Thus, he likes to work on posture control followed by force production and, finally, speed. He believes golfers need to spend the majority of time (70-75 percent of time) getting stronger, increasing their ceiling of potential, then implementing speed-based training and power development over time, to transfer the developed force quickly.

Gould, besides having developed a unique golf fitness screen, has, since completing his Ph.D., started a company named Dr. Golf Global – a kind of online health club – that currently helps over 10,000 golfers from around the world improve their golf fitness online. While he himself is based in Cardiff in Wales, UK, there is also certification available for coaches everywhere. The general methodology used is to ask golfers what they wish to achieve in their golf swings, then assess them through the GMS and finally recommend a battery of suitable exercises that can help them perform better and reduce their risk for injury.