Every golfer – regardless of skill-level – faces several feast or famine shots daily. Make them and life is spared, miss them and …. Those shots are the putts, a golfer’s final hurrah (or not, as the case might be) on every hole.

So what must a golfer do to sink more putts? What aspects of putting matter most?

Three famous golf instructors (in alphabetical order) are Craig Farnsworth (an optometrist), Geoff Magnum (a lawyer) and Dave Pelz (a NASA space researcher). What do they believe matters most and is there scientific evidence for their recommendations?

The best way to analyze what the three experts say is to divide up their information, before delving into their suggestions, into two required skills: the physical and the non-physical. The physical skills would involve the actual act of preparing for, and making, the putt; while the non-physical skills could include observing, analyzing, planning, visualizing, reading of the greens, as well as “feel” concepts, such as touch, tempo, rhythm. 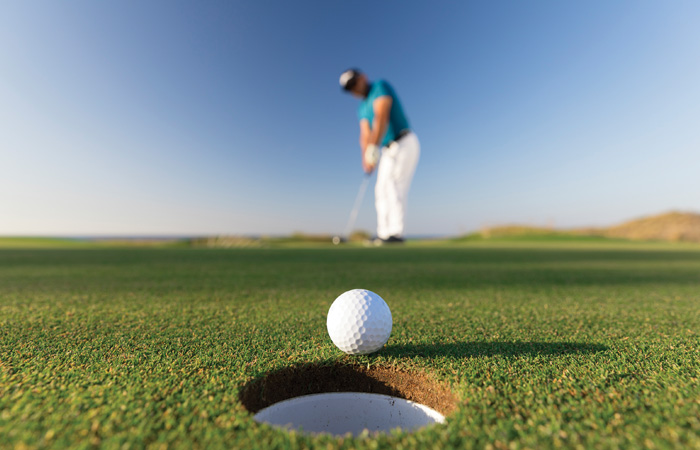 So, while the non-physical skills are an art-form requiring much patient practice to improve, the physical might be a good starting point to consider working on. The physical aspects obviously include how the golfer sets up and aligns his or her body parts and aims the putter face at address, and then how he or she makes the actual stroke and how the putter must arrive at the ball for correct ball roll. The goal of a putt, according to Magnum, is to have “a square putter face moving straight online at the onset of impact and remaining square and online beyond impact for about two-three additional inches, without excessive launching of the ball off the ground or imparting too much backspin.” To avoid excessive “launching off the ground” or “too much backspin” should require a more level stroke, connecting at the equator of the ball rather than a descending angle of approach.

Each of the three putting advisors recommend different styles of grip, set-up and swing, but they all have one idea in common: there should be no breakdown of the hands and wrists through impact, and no excessive body motion, either. All three suggest that having the eyes directly above the ball is important for being able to look at the distance to the hole correctly. And all emphasize the importance of putting speed over direction. In fact, Farnsworth says, “Having the right speed translates to making more putts.”

The set-up concepts required by the three instructors are quite different, with respect to shoulder, arm and hand positions, body angles, foot angles and ball position. While two of them discuss all the various putting styles that exist and then explain their preferred style in greater detail, one only explains how he would prefer golfers putt the ball. All three try to create some type of pendulum motion during the actual putting stroke.

Geoff Magnum requires (for what he terms a “straight stroke”) the golfer to start the backward motion by moving the lead (left for a right-handed golfer) shoulder socket downward toward the balls of the lead foot. The lead hip is anchored at the start of the takeaway to prevent it from moving in the backstroke. This movement, he says, will push the triangle of the arms and shoulders straight back along the aim line. Then, the forward stroke is a curl back along the line of the feet, once again created by the lead shoulder, and the golfer avoids moving the throat line to swing the putter squarely as it passes the ball.

Craig Farnsworth refers to his invention as the “Putt Doctor’s Stroke” and states it is a “natural” motion with an in-to-square-to-in path. It is powered by the back, and the shoulders turn rather than rock up and down. With a fixed head and no sway, the arms push and pull the shoulders, back and upper chest and move them back and through. If excessive movement is generated, a golfer could have only the arms and shoulders rotating around a stable chest and spine.

Dave Pelz recommends the “pure-in-line-square” (pils) stroke in which the power source is “the gentle swinging of the arms” (which also involves the shoulders). The motion is like that of a grandfather clock, with the pendulum swinging gently back and forth with a rhythmic motion. It requires the arms to be connected at the shoulders at one end and at the putter at the other end, forming a triangle. The resulting stroke is a “pendulum putting stroke,” which, according to Pelz, works well under pressure, too. Putting speed and ball roll are determined by the length of the stroke.

Now here are some questions. From a physics perspective, a pendulum can have only one low point. How can a golfer guarantee that the low point of a particular swing (determined by the dynamic balance of many moving body parts) is exactly where it is required to be … at the ball! Given that movement is known to be variable even with the best of athletes. Why not have a swing with an extended low point, so that the ball could be anywhere within that region?

Next is a question based on anatomy and neuroanatomy. The shoulders and thorax are the uppermost part of the torso. The torso is a large, slow-moving part of the body, so it would be difficult to rock it up and down or rotate it round and about consistently in the short timeframe the putting stroke lasts. Even the Pelz pils stroke, which is said to be more arms than shoulders, must have some shoulder rock component in order to keep the putter head on a straight line throughout the swing. That is what one might deduce from the pictures of the stroke in his book, which show the clubface delofted at the end of the backstroke, and re-lofted at the end of the forward stroke.

From neuroanatomy we learn that the human central nervous system allocates the most minimal resources to torso muscles’ movement (unlike what it provides to the arms and face), as humans were designed for the hunter-gatherer role of using the legs to “hunt” and the arms to “gather,” and did not require sophisticated torso movements such as forward bend, side bend or rotation.

So, perhaps an anatomically meaningful stroke would be one in which it is the arms that go back and through, with no head, legs or torso motion at all. The clubface would naturally fan very slightly open in the backstroke, and fan very slightly closed, equally naturally, in the forward stroke, and move past the ball on a straight path with a square face at impact with an expanded low point. This fanning open and closed are inevitable because the two arms are attached at the hands on one end and at the shoulders on the other. The shoulders, in turn, are at the two ends of a centrally rotating spine, so some slight unconscious rotation, despite the elbows always moving on an “elbow line” in front of the body line and parallel to the aim line, forever. One important action during the forward stroke is to hold the neck completely steady, as it helps to increase the rise-angle of the putter head a bit, and thus reduces the slight skid the golf ball inevitably has before it begins to roll smoothly on the green.

Now that you have four options for the physical aspect of the putting stroke to choose from, which one makes the most sense to you and which one might you change to or already use? Happy improved putting!