Happy New Year all. If your goal for the new year is to score better at golf, and if you’d like to work towards that goal by training better and fueling better, here is some useful information from a very recent (published April 2022) review paper titled ‘Competitive Golf: How Longer Courses Are Changing Athletes and Their Approach to the Game’ (a great read – the paper may be found by typing the title into scholar.google.com). The author, Matthew Zoffer, based his information on the many research studies he reviewed.

The author firstly builds the case for the fact that as golf courses get longer, a golfer expends more energy on playing the course and thus must be prepared to have both the right type of fitness training and suitable nutrition for ever-lengthening courses. Although golf is considered a moderate level physical activity sport, strategies to train, fuel and supplement must change with changing circumstances.

Energy expenditure for golf includes the transportation of one’s clubs – which could be accomplished by carrying a bag of clubs or using a pushcart (riding a golf cart is not discussed), walking the course, and hitting golf shots. Interestingly, the energy expenditure for carrying a bag or using a pushcart is similar and is 411 kilo calories (kcal) for 9 holes (with an average bag that might weigh around 20 lbs). 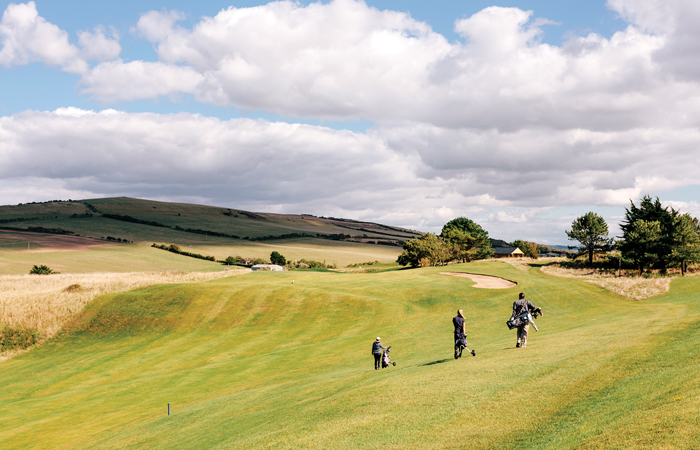 The distance walked is different based on gender (women typically play from more forward tees), and a golfer’s skill level, because less-skilled golfers might zig-zag across the fairways as their shots are more erratic. Interestingly, high school boys might walk between 6500 and 7100 yards, while a course would be laid out at between 6800 and 7765 yards for PGA pros. Similarly, high school girls might walk anywhere between 5600 and 5850 yards, while LPGA players have courses set up to be between 6200 and 6600 yards. This yardage does not include the walk from one green to the next tee box. One 2013 study stated that total energy expenditure for walking over an 18-hole golf course of between 5525 and 5919 yards was about 926kcal.

Thus, states the author, the majority of energy required for golf is for the purpose of walking on the course, and both the mode of transporting the golf bag, and the perhaps 80 strokes a golfer might complete a round in, require far less energy.

The main sources of energy can be anaerobic (in the absence of oxygen) and aerobic (using oxygen), and while the golf swing itself uses an anaerobic form of energy, the walk on the golf course, and even carrying clubs, using a pushcart or even a golf cart, all require aerobic energy.

Thus, states the author, as golf is played at a submaximal energy level, endurance conditioning (which can also be referred to as aerobic or cardiovascular training) is very important, as endurance-trained athletes perform better at submaximal levels of activity. Additionally, athletes should not focus only on strength training to hit the ball further, but also use the type of fuel (phosphocreatine) that provides energy for a short-duration, explosive movement. 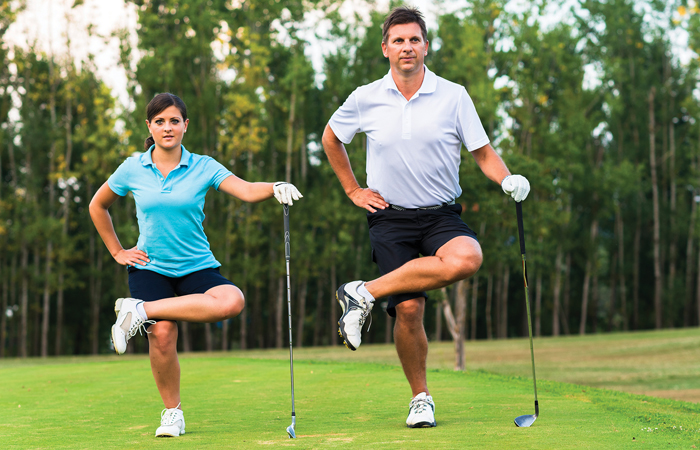 So how much aerobic training is suitable? What should the ratio of aerobic to strength training be? It would, according to Zoffer, depend on the skill level of the player. As less skilled golfers will have more errant shots from hitting left or right of the green, they would walk greater distances and thus need more energy to walk a ‘longer’ course while carrying their clubs. Moreover, the pros in bigger events have a caddie to carry their golf bags.

To discover what training might be best for longer courses, the author examined an earlier review paper by Smith et al. (2011) on conditioning programs. In that paper, Smith compared results from 13 studies, and Zoffer was surprised to discover that only one of the programs incorporated cardiovascular training. Aerobic training or ‘cardio’, should form an essential part of any training program going forward, to help reduce fatigue for golfers playing on increasingly longer courses.

Zoffer goes on to give some detailed advice for high school, college and professional golfers based on his findings. The training for each group differs, as high school golfers play only in one of the two school seasons of spring and fall and, moreover, must carry their own golf bags, and are usually less skilled, so would typically walk longer distances.

College golfers play year-round, and for them the ratio between endurance and strength training would depend on individual deficiencies, keeping in mind that hitting the ball further, and thus, increasing strength for that purpose, is very important at this stage.

For professional athletes who compete throughout the year but have caddies to transport their clubs, strength is important to maximize their strokes-gained statistic which happens mostly from hitting the ball long distances. However, endurance is also important to prevent early fatigue as these athletes walk the greatest distances from tee to green.

Aside from fitness training, both fluid and glucose management are important factors in maintaining energy throughout a round of golf. Carbohydrate (as a source of glucose) needs are greater during endurance training, than during strength training, days. In general, the intake should be between 30 to 45 g per kilogram of fat free mass of the athlete, per day, and no less than 30g/kg/day for women.

Carbohydrate fueling varies between pre-round, in-round and post-round parts of the day (the same applies for fitness training schedules), with 1-4g/kg body weight being consumed between one to four hours prior to the round, 30-60g of carb snacks per hour during the round, and about 15-25g of carbs within one to two hours after the round being recommended. If the golfer does some fitness training after a round of golf, those numbers will increase.

Protein intake recommendations would be between 1.2 to 2g/kg per day and would be higher for the more skilled golfers when distance is a priority. Also, another 15-25g of protein should be consumed within two hours of completing a round to aid recovery. Some foods such as peanuts, quinoa, lentils, and tuna are high in the branched chain amino acids that the author suggests are important to incorporate into post-round meals, as they are the proteins that help post-exercise recovery.

The author has some good recommendations for hydration amounts pre-, during- and post-round, and also discusses nutritional aids to better putting, as well as supplements that can help golfers. Vitamin D is a topic of great interest too, and is important to keep up a golfer’s immunity, which is especially important for those who travel to compete and could pick up infections while doing so and might also thus have reduced hours of sleep.

For a successful competitive game in 2023, folks, even if you’re a weekend warrior competing with your buddies for fun, more informed fueling and hydration, and even some long evening walks, are all sure to take your game up a few levels.