Ever hit a shot that vibrates your hands at impact? The feeling is from an “off center” contact to the clubface. This type of miss can also turn the club in your hands. It’s not a very good feeling and even worse when the temperatures are cooler. Conversely, there’s nothing better than making impact in the dead center of the clubface. So, how can you get more consistent with the dead center contact at impact?

The first step is to understand why someone hits “off center.” Below is a list from my book “The Four Keys to Improve your Game.” It illustrates the reasons for missing on the toe or the heel of the club.

Movement into the ball with any portion of the body is going to likely cause a shot off the heel. This can come from you falling toward the ball with your head, pushing your knees into the ball or swinging out too much approaching impact. It could even stem from just setting up too close to the ball. Something has caused you to get closer to the ball at impact.

When the shot is off the toe of the club you’re moving farther away from the ball. For starters, you could be set up too far from the ball or set up on your heels. Once the swing is in motion a toe hit results when you stand or raise up from your address position, pull your arms in, or swing too much inside and to the left for a right-handed golfer.

An excellent drill to determine where you’re hitting on the clubface is simply using two tees. Place one on each side of the ball at address. Give yourself enough room to swing in between them and hit a shot. If you hit the inside tee, you shot will be off the toe. The opposite is true if you clip the outside tee.

Practice to allow yourself to swing through and only catch the ball and avoid both tees. This will give you that sweet feeling of hitting in the center of the clubface. Understand that the clubface is typically only 3 inches wide. A mistake of just 1 inch can make the difference between that sweet feeling and a shot that vibrates or twists. 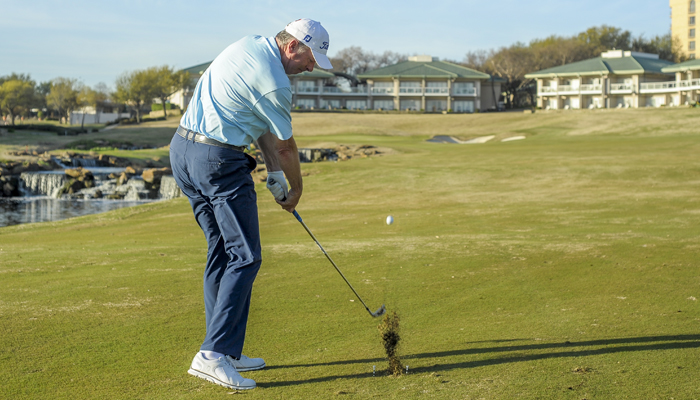