With Texas and Oklahoma seemingly headed for an epic college football showdown this month, it seemed the perfect time to explore wild golf in the Red River region.

Remote courses, state parks and fishing spots flourish on both sides of the border, making the Red River a golf adventure waiting to happen.

The trusty old F-150 and I had been longing for a return trip to the Sooner State anyway, we just needed an excuse. Plus, since I paid off the beast’s speeding ticket from our last visit, we had no warrants to worry about.

So, we packed up our usual assortment of golf, fishing, and camping gear and hit I-35 North with a gleam in our headlights.

Our plan was to visit courses close to the Red River without going to Lake Texoma, a virtual one-stop shop for golf adventures. Lake Murray State Park, a nice central location with easy access to courses in all directions, would serve as base camp for two nights. First stop after a beautiful breezy night under the stars was The Eccentric Duffer, for obvious reasons. 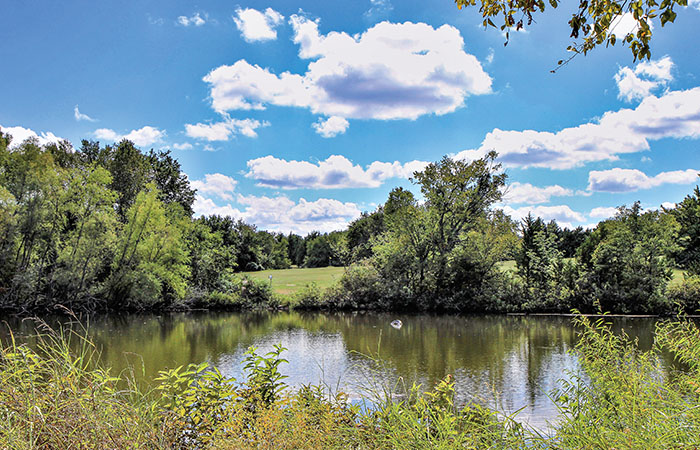 When routing a golf course on their farmland in Ada, Oklahoma, Ken and Elizabeth Hobbs had no need for sophisticated technology. A friend bulldozed the heavily wooded landscape behind their home and then the couple employed a less-than-precise method for determining green locations on the nine-hole layout.

“My wife would stand where we thought the green could be and I would hit it as close to her as I could,” said Ken, 84. “I’m not a very good golfer … I missed her nine times.”

When Ken, a retired engineer who worked in the oil “bidness”, told Elizabeth that their hilly backyard was well-suited for links, she simply said, “Get after it.” It took about 18 months.

Twenty-five years later, their hands-on approach is evident in every nuance of the grounds. The tiny pines and pecan trees planted by hand in 1996 now cast long shadows on fairways.

Elizabeth mows the fairways. Ken handles the greens and other course elements.

Elizabeth came up with the name, which fits her husband to a tee. When he’s not repairing his smooth Bermuda greens, re-aligning tees to improve shot angles, or felling a tree, he can be found tinkering with old golf clubs in a small corner of the tiny clubhouse. Rows of repaired clubs for sale stand near the front desk.

As we chatted on the clubhouse couch over cans of Coke, I spotted a putter that resembled one my father passed down to me when I left for college.

I told Ken the history of the coveted old blade, which got sucked off the top of my car, along with the other clubs, by strong winds on a two-lane highway outside Bakersfield, California. From the rearview mirror, I saw the clubs bouncing haphazardly on the pavement. In the time it took me to turn around, a passing car had pulled over and its passengers were rummaging through my scattered belongings. The scavengers’ car almost hit me as they sped away with my putter and a few other items in tow.

I asked Ken, “How much you want for this?”

Despite his objections, I handed him some cash to use for the charity of his choice.

The Duffer isn’t making Ken and Elizabeth rich. It’s a labor of love, and their love of labor that keeps the quaint course afloat.

But the design is creative with plenty of challenges. The routing twists over gentle hills, and the trees have narrowed the fairways as they have grown. One hole requires a lengthy tee shot over water. Another par-3 demands a cut over a tall tree to reach the “blind” green. 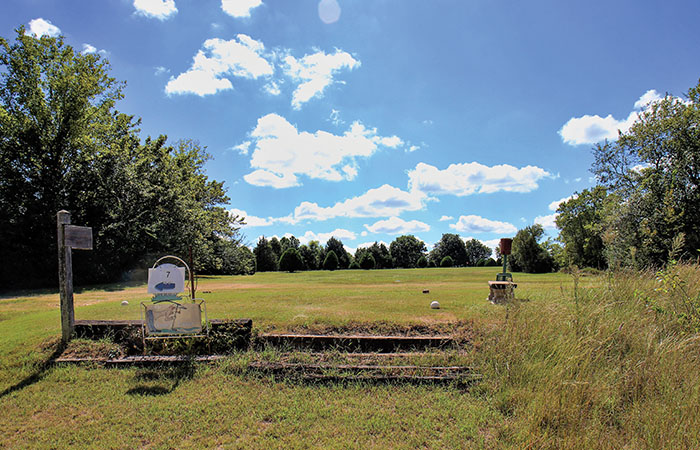 Back on the road, I headed down the steep hill of County Route 1550 toward the towering Holcim US cement plant. A 10-minute drive on Hwy. 377 put us at Lakewood Golf Course.

Lakewood, designed by Bart Todd in 1973, proved to be a treat. The parkland layout, nestled on steep hills beside Clear Boggy Creek reservoir, boasts some wild elevation changes.

Standing on the first tee, the postcard panorama featured vivid blue skies and big clouds hovering over the picturesque lake. I could practically see Texas, but because of the big drop, I had to walk to the front of the tee to locate the landing area.

The first hole heads downhill toward the lake but then the approach shot is to an uphill green. The lake narrows after the second hole, then lazily meanders across the property.

On No. 3 you hit over water and then cross a cool suspension bridge to begin the uphill trek to the green. The ups and downs are continuous. So are the majestic vistas. Many of the fairways are lined by dense forest.

The 2,910-yard, par-35 layout is a shot-maker’s paradise; you can hit every club in the bag, and the sloping terrain begs for shot creativity. The final hole, a 195-yard par-3 played from the back-nine tees, requires a shot over the lake to an uphill green. It’s the most difficult hole. From the front-nine tee, the hole plays 165 yards.

The clubhouse features art-deco stools for diners and the original fireplace with an inscription of the founders, dated 1967. Antlers are attached to the brick wall, and beside the fireplace was an ancient golf bag filled with clubs from bygone days. My eyes locked onto a Ping putter, one of the first made. I nabbed one of those to replace the blade I lost in the unfortunate highway robbery. I kept that Ping putter in my bag until it mysteriously disappeared from my bag on a flight to cover the Masters.

I told the heartbreaking story to David Muse, who runs Lakewood with his wife, Mildred. Then I asked him how much he wanted for the putter.

So, for those keeping score, another nine-holer operated by a husband-wife team, another sentimental putter acquisition for me, and another charitable donation. I couldn’t wait to reach the next stop.

We headed directly south on US 377 for 35 miles, bypassing Sulphur Hills GC, another nine-hole course, for Tishomingo Golf Course. Tishomingo, population 3,034, was the first capital of the Chickasaw Nation. 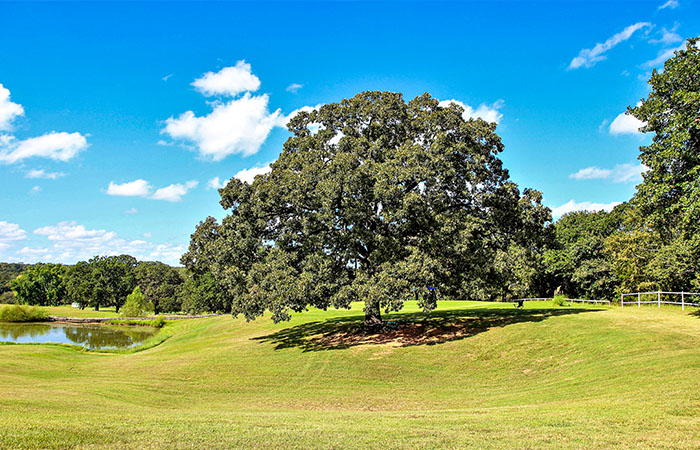 The semi-private course, built in 1925, has been modernized considerably. We could not have picked a worse time to visit. The club was staging a two-day tournament, which made it difficult to get a feel for the layout. Tired of waiting for photo-ops without foursomes in the background, I drifted over to the creek. The sun peaked through a dense row of trees, and shadows danced on the glassy water. I took a shot of yellow flowers near the bank, then quickly checked the image, zooming in to check if I caught the reflection. What I saw in my camera was a water moccasin zooming toward me. I managed to get back on the bank quickly, avoiding the aggressive snake, and even managed to snap a few photos. This was only a month removed from my late-night rattlesnake confrontation in Abilene.

OK, so no putter in Tishomingo.

After chatting with the guys manning the giant smokers by the clubhouse it was getting late, so I summoned the beast for departure. Lake Murray was only 30 miles away on US 70 West.

Like most Oklahoma state parks, Lake Murray is easily accessible with helpful rangers. We pretty much had the primitive camping place to ourselves for two nights. Quality fishing spots are just a quick walk away.

A nice breeze kept the temperature bearable overnight, and in the morning, we headed down to the marina to enjoy a lakeside sunrise. We then set off for Texas, grabbing a breakfast burrito from the convenience store before hitting I-35.

Had we not stopped to take pictures of some the most random things imaginable, we would have reached Gainesville in about 35 minutes. But there were rusted tin shacks decomposing in the sun, and, well, a bunch of other rustic things.

Anyway, Gainesville Municipal Golf Course was still there. The course has a bit of history, opening in 1956, and a renowned architect — Ralph Plummer — on its side.

The 18-hole course is about three miles west off Hwy. 82. Measuring 6,407 yards, the layout is intriguing in that the back side seems way more challenging than the front. Still, it’s a fun track with wide fairways and small undulating greens, typical of the era in which it was built. The big old trees add tons of character and shade. Also, I saw no snakes along the creek that meanders throughout. 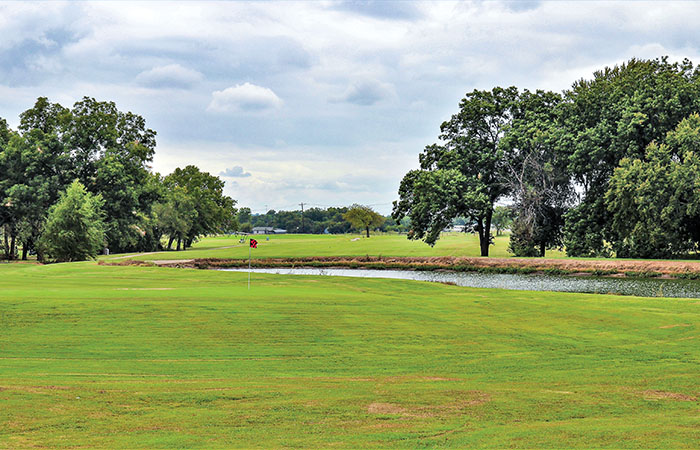 Back on 82, we kept heading west for our final stop. A turn on FM 1199 North provided an entertaining drive. The pastures out there were crowded places with cattle, oil wells, and windfarms.

The steep slopes create a dramatic effect, boosting the “wow” factor to 11 for someone accustomed to playing remote minimalist tracks. At Turtle Hill, you walk off an elevated green, ride your cart down through the forest, and emerge onto another magical kingdom at the next tee. The ginormous wind turbines add a bit of surrealism to the experience.

The ups and downs also make for entertaining golf holes. From the tee on the par-3 11th, you get a breathtaking panorama of the vast Texas countryside. You must use your head to determine how the elevation will affect club selection. 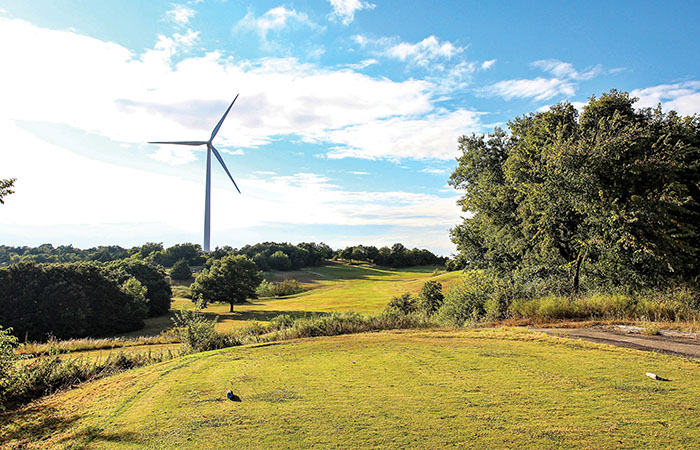 Heading home, I couldn’t help but feel fortunate. I had managed to steer clear of a ticket, and a snake, in the Sooner State. Can the Longhorns be so lucky?