On the debut journey of Tales from the Back Nine, we embarked into the great unknown with stubborn invincibility. Enthusiasm for exploring wilderness golf adventures trumped common sense. With my faithful F-150 loaded with golf, camping and fishing gear, we took off for the remote rugged stretches of West Texas in mid-December feeling bulletproof.

Driving rural routes at night. Battling frigid temperatures and powerful winds. Sleeping in a tent. What could possibly go wrong, we wondered

Well, plenty, as we quickly learned. We almost ran out of gas on a lonely farm road trying to find our first course off the beaten path. Fortunately, the ole pickup powered through a litany of ailments to heroically deliver us to a service station on fumes. Two nights later, the old lug’s alternator died, stranding us in sub-freezing temperatures on a desolate road 18 miles from civilization. I didn’t have the heart to send the Beast to the scrap heap.

Battered and bruised, and sporting a new alternator, we trudged on, logging about 10,000 miles. We uncovered 61 remote golf gems and visited 19 state parks in Texas, Oklahoma and Kansas.

We breakfasted with bison, encountered two snakes and a herd of mule deer, and played pasture pool before a gallery of goats, chickens and cows. We learned to putt on sand greens.

We fought through extremes in weather, from 9 to 105 degrees, high winds, driving rain and a tornado warning. The truck became my security blanket, providing shelter from storms and negotiating tricky roadways and bumpy terrain.

But the miles took their toll. On the eve of this final leg, the Beast was running rough. I tried my best to conceal his health woes, but when the wife by chance had to move him from the driveway the day before departure, his “check engine” light came on. I clearly explained that the warning light was not flashing, so he merely needed service. A flashing light indicates the need for emergency repair, at least according to the manual.

Wife: “No way in hell you’re taking the truck.”

Arrangements were made and keys juggled among family members for me to drive a different vehicle. But as I packed stuff into a hybrid SUV, which makes no noise when turning over, I got sentimental about the Beast. Nobody else was at home, so I quickly threw everything into the bed of the truck, topped the cargo with firewood and then took off for a bone-chilling three-day trip to East Texas.

The original plan was to drive three hours to Atlanta State Park, just south of Texarkana, and then visit courses along the Louisiana border. But with my late afternoon start delayed by vehicle angst, I headed for Tyler State Park, about two hours away. The park has no gate, a most welcome amenity for late arrivals.

Heading east on I-635 at rush hour, the truck’s warning light started flashing and then a few panicked minutes later, stopped. Whew. Once we turned on US-80 East and the Beast settled into his 75-mph comfort zone, it was smooth sailing.

Tyler State Park, carved in a pine forest and surrounding a lake, was pitch dark. With record-low temps expected, I explored all the camping areas, finding one with dense tree cover from the wind. I took stock of supplies, which I should have done before leaving. I was in dire need of several key survival items. I was also freezing in the cold drizzle. My phone rang. The wife was laughing: “So you took the truck, huh?”

After a trip to Walmart, it was around midnight when I returned. I struggled to get the fire going because of the damp ground and constant drizzle. Even after the wood ignited, I couldn’t get warm, and the logs started giving off more smoke than flames. I was in trouble. With temperatures dipping into the teens, there was no way my worn old sleeping bag would insulate me. I was fully clothed and afraid. And miserable.

My feet and hands were almost numb. I walked around, kept my body moving, but nothing helped. About 2:30 a.m., the fire went out. I decided to stay up all night. Figuring the truck would provide better cover than the tent, I put the heater on full blast for a few minutes, reclined the front seat, wrapped myself in the sleeping bag with a heavy blanket over that, and then turned off the engine. I remember looking at the clock when it was 4:45. The next thing I knew, the sun was in my eyes and the clock read 10:30.

With a cup of coffee shaking me from my disoriented state, I drove about 45 minutes on I-20 East to Alpine Golf Course in Longview. The facility features all the aspects of a country nine-holer except for 18 holes.

The layout, established in 1955, is short at 6,011 yards from the tips, playing to a par of 70. This fun shot-maker’s track is all about positioning off the tees and finding the best angle to attack the sloping greens. Most of the fairways are pinched tight by massive pines, and the rolling terrain can deliver surprising bounces. The mounded greens have a classic look with wispy grasses collecting shots that run off. 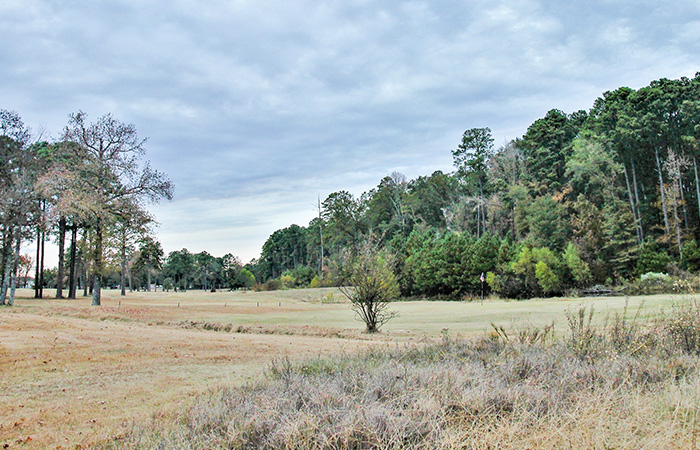 This is a great walking course. The holes are close together with short distances from green to tee. But some of the holes seem to have been shoehorned into the design. Some greens are located too close together, forcing players to watch for errant shots from neighboring fairways.

Still, Alpine is a bargain, offering green fee, cart, hot dog and soda for $20 on Mondays and Wednesdays. Figures, I was there on a Tuesday.

I got back to the park early, determined to have a more comfortable night. With some great firewood I bought from two guys parked beside the farm road a few miles outside of Tyler, my fire was blazing as I set tent and it kept roaring until I crawled into my sleeping bag.

In the morning, the park was ablaze in an orange glow from the towering trees. I set off for the Cherokee Country Golf Association course about 20 miles outside of Longview.

The course is nestled inside a small community along Lake Cherokee, a 12-mile-long private lake. The nine-hole layout, designed by Ed Stites in 1985, weaves through a dense forest of pines.

The design is creative to say the least, measuring a mere 2,168 yards with a par of 35. You can leave your driver in the bag because most of the par-4 holes feature dramatically sharp doglegs. Miss the fairway and you are in serious trouble, imprisoned by trees. No. 2 is a 187-yard par-3 with a tee shot of about 100 yards before the fairway dramatically swerves right. Cutting the corner is virtually impossible because the towering trees are tucked so tightly. 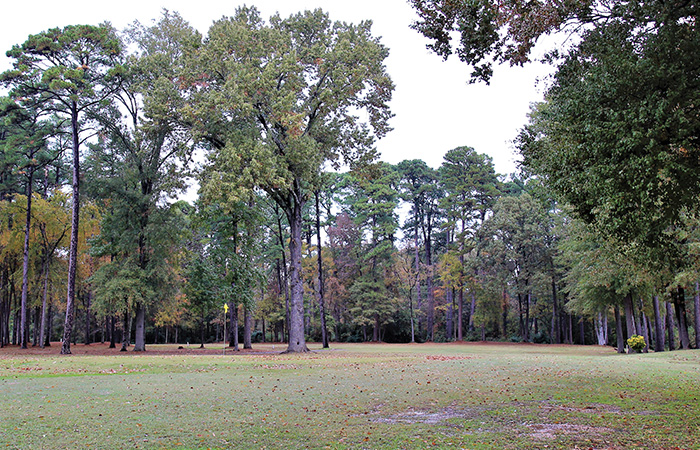 The longest par-4 measures 324 yards, and the longest par-5 is 449 yards. Most of the greens are small and sit flush to the ground, inviting bump-and-runs. The fun setup fits the recreational community it serves, allowing a quick nine to fit into a day of boating, fishing or bird watching.

As usual, we saved the best for last, pulling into Marshall just before sunset. Marshall’s biggest claim to fame may be its “Wonderland of Lights” Christmas display — one of the nation’s largest light festivals. But Marshall Lakeside Country Club has garnered a lot of attention too.

The classic course, which opened in 1926, is one of the oldest around. The semi-private club boasts a creative golf design that has been unchanged since a 1950s renovation. Mature pines line the plush fairways.

The course winds around a pond. A scenic park area features a gazebo. A rowboat sits on the calm water, moored to a tree. Water comes into play on several holes. No. 2, a 431-yard par-4, requires a perfectly placed drive between rows of trees to a 90-degree dogleg right. Big hitters who try to cut the corner must clear a dense row of trees. The relatively small sloping greens, most guarded by bunkers, are typical of designs from that era, requiring strategic approach shots to get close.

The 3,131-yard course, which plays to a par of 36, currently sits at No. 4 in The Dallas Morning News’ Top-25 rankings for nine-hole courses. 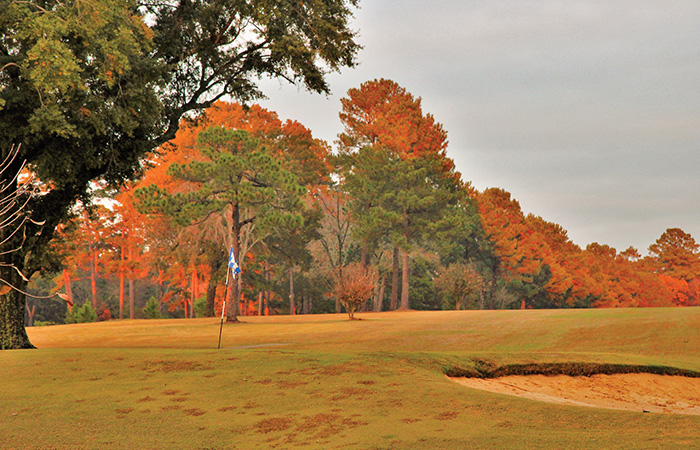 With Lakeside in our rearview mirror, the Beast and I had good reason to celebrate. Our many miles together spun a year’s worth of tall tales in which the middle of nowhere became the center of our universe.

Share: Tales From the Back Nine Part XII – East Texas