What happened when the greatest golf course architect in the modern era plied his considerable imagination and skill on one of the most beautiful spots on Earth? Well, you get one of the special places to play the game of golf on Pete Dye’s glorious Teeth of the Dog layout at Casa de Campo Resort & Villas in the Dominican Republic. “Teeth” is widely known as the No. 1 course in the Caribbean.

Even with Mr. Dye’s 50-plus-year legacy featuring sparkling gems like Harbour Town Golf Links, the Ocean Course at Kiawah, TPC Sawgrass, PGA West and Whistling Straits, the maestro himself called Teeth of the Dog his “best course.” How is that for high praise?

However, Mr. Dye didn’t take full credit for his creation of the “Heaven 7” on Teeth of the Dog. He gave a “co-designer” tribute to a higher power as he famously quipped, “I created 11 holes and God created seven.”

Why so good? Well, with seven dramatic holes hugging the craggy coral formations rising out of the azure Caribbean Sea, the golf on Teeth of the Dog is thrilling. The incredible ocean holes, Nos. 5 – 8 and 15 – 17 are as scenic and challenging as the famous seaside seven at Pebble Beach Golf Links on the Monterey Peninsula.

Few par 3s anywhere are as magnificent as the 174-yard 5th. This jewel of a hole isn’t camera shy as it has become one of the most photographed in the world. It is also the epitome of why Teeth is as “must play” as they come. Take a moment to savor the seascape before getting to the business of what Dye and Mother Nature have in store.

The tee-box is hard against a rock wall standing guard against the unrelenting pounding of the surf while the peninsula green boldly juts out into the sea. Despite the idyllic setting, menace lurks most everywhere especially as a scenic cove swallows up most anything hit short and the ocean at large is ready to devour shots struck to the left. 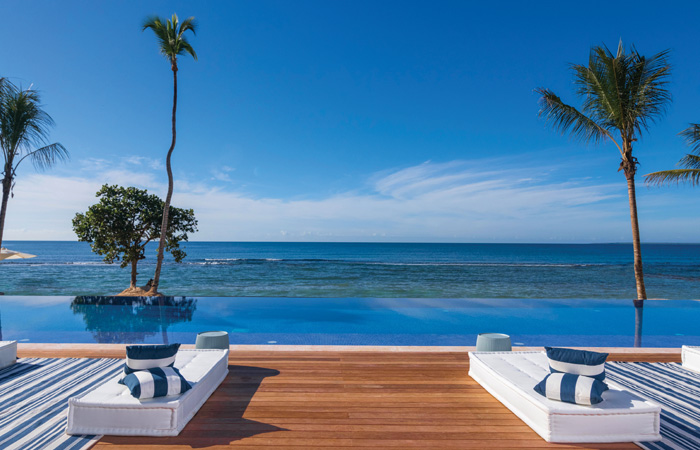 A semi-circle bunker flanks the raised putting surface front and left, while a ball-swatting tree rudely guards the right corridor should one think an inland route away from the drink might be prudent. It really isn’t, as the downhill pitch shot is next to impossible to stop. Thankfully, the bunker prevents the ball from becoming waterlogged. Throw in the vexing sea breeze and it is all the golf one would want.

The 5th is so perfectly good, you just cannot wait to play it again, but the course still has six more oceanside holes remaining, each one every bit as fun and dramatic and thrilling to play. And on it goes at Teeth of the Dog, just one grand hole after another working in tandem to form the tapestry of this masterpiece. You only need to play Teeth of the Dog once to concur with Mr. Dye. Yes, this is his best course.

Upping the ante even higher for golf travelers, the resort has two addition Dye-created gems. Twenty-seven-hole Dye Fore joined Teeth of the Dog in 2002. Its three nines – Chavon, Marina and Lakes – are distinct. Chavon features seven holes running atop cliffs dropping 300 feet, Marina meanders down to a harbor ringed by restaurants and shops, and Lakes is artfully crafted across tumultuous terrain. Golf course architecture aficionados call Dye Fore “the most underrated course in the Caribbean.”

Located in the interior of the property is the resort’s third Dye layout, The Links. The moderately hilly track with tall Bahia grass framing bunkers and undulating greens presents spectacular Caribbean views. Slightly over 7,000 yards from the back tees and playing to a slope of 126, it is considered one of the most-forgiving courses Dye has designed, but it is a blast to play nonetheless.

Ideal for creating a “world of your own,” Casa de Campo offers an array of exceptional fully appointed villas perfect for golf groups complete with a pool, maid, and butler service. The villa options range from three to 11 bedrooms with stylish living areas as well as myriad creature comforts. From secluded garden villas showcasing the area’s abundant flora to the tranquil splendor of the Caribbean coast in an oceanfront villa, each style offers contemporary designs. The 7,000-acre property additionally features 249 luxurious guest rooms and a variety of splendid restaurants for all tastes. 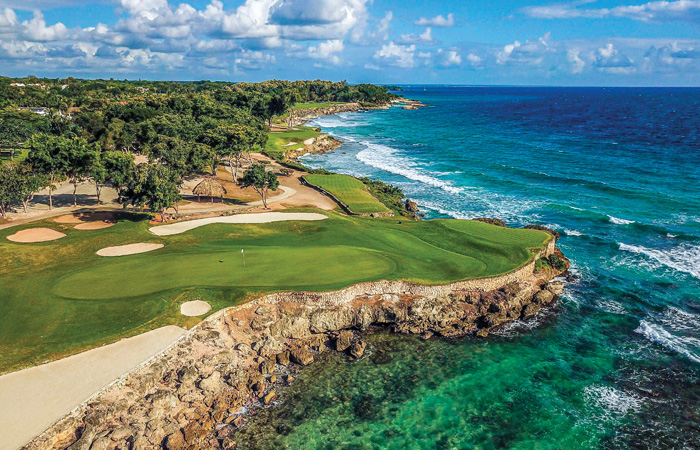 The Minitas Beach Club is also a perfect spot for swimming, drinks, and dining. The new family and adults-only pools both offer an ideal alternative to the beautiful waters of the Caribbean Sea. The resort is additionally highlighted by a 370-slip Marina & Yacht Club, Polo & Equestrian Club, La Terraza Tennis Center with 13 immaculate Har-Tru courts and 245-acre Shooting Club.

“We here at Casa de Campo like to say that all guests have to do is bring their clubs and we will handle everything else needed for an incredible Caribbean getaway,” says Andres Pichardo Rosenberg, President of Casa de Campo. “Golfers will enjoy our exceptional accommodations and resort amenities while playing our 63 holes designed by Pete Dye including the shining jewel of our property, Teeth of the Dog.”