This year’s Charles Schwab Challenge, forever known as Colonial, was the PGA Tour’s return to live golf. The greatest field in Colonial history made it the most eagerly anticipated tournament in the tournament’s 74-year anchor into local professional golf.

But for all the eagerness to see North Texas’ annual rite of Tarrant County Spring, what it turned out to be was forbidden fruit. The Last Temptation of the golf fan.

The global pandemic of COVID-19 combined with strict PGA Tour rules and regulations made the 2020 Colonial a totally fanless affair. While the players, caddies and officials had to undergo exacting testing once they entered the secure Colonial Country Club bubble, the local golf-loving fans were on the outside looking in.

Not that that mattered to Colonial members Mark Goldman and Pat and Michelle Henggelet who used their prime location, their North Texas friendliness, pioneering spirit and love of charity to make it a Colonial like none other, a watch party which may never be repeated.

Goldman, who has a prime view of the 15th fairway, from his house on Mockingbird Lane, and the Henggelets with an up close and personal view of the 16th tee from their expansive place on Country Club Circle used the event to provide family and friends with their own luxury boxes outside Colonial grounds.

“Several times over the years, Colonial members have been asked to sacrifice for the good of the (colonial) tournament. When I got the word two weeks ago from the tournament chairman that members were definitely not going to be able to attend the tournament in person, that’s when we began to put this plan into action,” Goldman said. 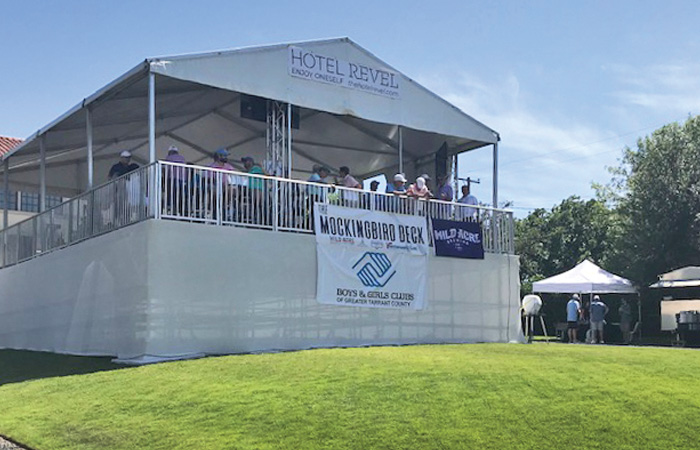 That plan included a large white, shaded professionally erected tent, dubbed the, “Mockingbird Deck,” for the street the multi-story house sits on when it’s not being used as a front lawn of a golf luxury box.

“We’ve lived here for eight years,” Goldman said, “and my wife and I are big supporters of the Boys and Girls Club. We wanted to have our friends out here, but socially distanced and raise money for charity.”

The Goldman’s set their goal to raise $10,000 for the Boys and Girls Club of Tarrant County. To achieve that, they charged each participant, a max of 50 people a day, to attend and also encouraged a $5 dollar donation for each birdie on the par 4 15th hole, which unfolded spectacularly in front of them.

While the elaborate golf watching setup cost just over $20,000 Goldman said they were able to get sponsors for the bottled water, in great demand with 90 degree heat all week long, from Frost Bank and Wild Acre Brewing Company sponsored the harder drinks.

Other sponsors chipped in on the food and the golf gear for sale in the tent.

“Our goal was to raise money for the Boys and Girls Club while social distancing and keeping everybody safe,” said Goldman. “Our friends over at 16th have a good view and a good time and so do we.”

Indeed, the Henggelet’s, who has the large two story house and the lot directly adjacent to Colonial were having a very good time with family and friends and one very fortunate Avid Golfer Senior Writer.

Michelle Henggelet said her husband Pat broached the subject of having some friends over to watch Colonial from their prime location overlooking a club parking lot and 16th tee.  She agreed that would be an excellent idea with no fans allowed on the course, but it wasn’t until later she learned he was constructing a multi-story green topped bleacher, shaded and cooled by fans, with TVs in each corner.

“We love Colonial and wanted to see the tournament. We have buckets set out to get contributions from people who are here, but I don’t think they will equal what we spent on this,” Michelle said.

The 16th hole party included all the successful items for an off-site, nearby golf course luxury box. There was a full grill smoking brisket for one tray, hot dogs in the others. Chilled bottled water in a large icy cooler and a fully stocked bar, plus handrails on the stairs, which led to the seating, in case you had too much of either before returning to view the golf.

Of course, there were lots of fans and portable bathrooms along with music and more TVs near the food and drink.

They even had the extra touch of an announcer, when son Sean Henggelet recruited a good friend and asked him to prove an intro for each player as he strode to the 16th tee box.

“Our boys have lots of friends and they were happy to help out,” Michelle said.

As the player made his way from the 15th green to the 16th, the Golf DJ announced the player, his hometown or residence and his notable golf accomplishments, often drawing a smile, wave or point as the player headed down the par 3 16th fairway.

“This is a US Open-type leaderboard for us,” Goldman said. “I’m rooting for Jordan (Spieth) as a Texas Guy, but wouldn’t it be great to see (Black PGA Tour golfer) Harold Varner win after what the last couple of weeks has seen and all he has been through and the interviews he has done. That would be really special to see him win.”

As to who had the better spot, the better party, the better time, that is certainly in the eye of the luxury golf beholder.

The food and drinks were equally cold, wet and filling. The bathrooms equally plush and necessary. The Goldman Tent on Mockingbird Lane could actually see more golf. You had views of the 15th and 17th fairways. Plus the 15th green, the 16th green (if you looked around a tree), part of the 16th tee and just a sliver of the 18th tee box if you squinted hard enough.

The Henggelets were closer, almost on top of the 16th tee with a sound system which could clearly reach and interact with the golfers. Plus, t-shirts which promoted the 2020 Colonial tournament as Socially Distancing.

Oh yes, a chap named Daniel Berger won the 2020 Colonial, in a playoff no less. Not that either sky box could tell that as the 18th fairway and green was blocked by the brick Colonial clubhouse.

But perhaps Pat and Michelle broke the tie when they invited the entire group, men, women, boys, girls, babies and dogs to their upstairs party room to watch the final few holes on TV in style.

Because when you’re living the good life from off course luxury boxes at Colonial, the party never ends.