For the last 50 years, Texas golfers have discovered that making a trip to Lake Tahoe to play the venerable Edgewood Tahoe Golf Course is a great way to beat the heat back home in the summer.
The addition of the ultra-deluxe 154-room Edgewood Lodge in June of 2017 along with a new 9th hole has turned the 18-hole public facility into a “must visit” place where golfers can enjoy the same VIP service and exquisite conditions they’d expect at the top private clubs in America or for other travelers looking for luxury accommodations to pamper them.

Located on the southern tip of Lake Tahoe – called the jewel of the High Sierras – the George Fazio design offers a challenging, but fair test through meadows and pine forests. There are trees not only bordering the holes, but even a few in the fairways that must be avoided with tee shots and approaches. Water comes into play on 14 holes.

Just as important, especially on the closing holes, are the panoramic views of the blue waters of what is the second-deepest lake in America along with the snow-capped Sierras in the distance.
Building the lodge did result in George’s nephew Tom returning again to make changes to the 9th hole, which used to be an inland hole with a sharp dogleg to the right. The tee was moved behind the former left green on No. 8 (there used to be two greens on that hole that were alternated). Golfers now get a glimpse of the lake from the tee. While 30 yards shorter, the winds off the lake now have to be considered more when making club selections.

“It’s a dramatic improvement,” said Director of Golf Randy Fox. “It now provides a nice balance with finishing holes on the lake for both nines.”

While most of this hole is in Nevada, a right-handed golfer stands the chance of hooking his drive off the tee into California. The state line angles from left of the tee (as you play the hole) to include a portion of the left side of the fairway as you approach the green, maybe 80 yards short where a marker on the beach denotes the border.

Playing at more than 6,200 feet of elevation, golfers experience cooler temperatures (70-85) than back home during the summer and can expect to see the ball carry farther (10 to 15 percent) at the higher altitude. Who doesn’t need this help most of the time, especially off the tee?

The course can play from 5,343 yards from the red tees to 7,529 from the back tees. Remembering the higher altitude, playing from the whites at 6,339 will not be a back breaker for the average golfers. One suggestion since the par 3s play about the same length from the whites, consider playing two of them from the blues. Also, take an extra club on the 167-yard No. 12 as the green is elevated and guarded by a deep bunker where just getting out can create a problem. Pars and even bogies are good on a nice variety of par 4s, but birdies can be made on the par 5s, especially Nos. 4 and 18 that play under 500 yards from the whites. 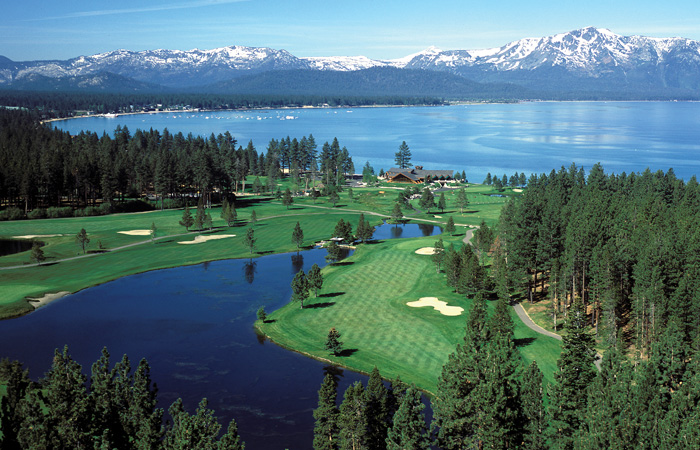 In its storied history, the course has played host to numerous major events, including the 1980 U.S. Public Links won by Jodie Mudd and the 1985 U.S. Senior Open won by Miller Barber with the only score under par.

During its May-October season, the green fees vary from $140 (Mondays through Thursdays) to $160 (Fridays through Sundays) in May to $260 and $280 on those same days in July and August. Of course, it’s closed during the second week of July for the American Century Golf Championship.
That’s when visitors along with NBC television viewers get to see stars from the NFL, MLB and the NBA along with a few coaches plus big-name entertainers competing for the 29th year.
Mark Mulder will be going for his fourth straight victory after compiling 73, 74 and 82 points in the 54-hole Modified Stableford format, offering 10 for a double eagle, 8 for an ace, 6 for an eagle, 3 for a birdie, 1 for a par, 0 for a bogey and -2 for a double bogey.

At the casinos across the street in Nevada, Mulder is listed as the 5/2 betting favorite with former Dallas Cowboys quarterback Tony Romo, now a leading TV talent on CBS who tied for second in 2010, right behind at 3/1. Mardy Fish, the runner-up the last two years, is 5/1. Who would dare put down money on Charles Barkley? He listed at 6,000/1 but has had only big negative number in the past.

Korbel will offer a $250,000 prize for an ace on the 17th hole. In a media outing prior to this year’s event, we got a similar experience for a $25,000 prize and my heart almost stopped when my 7-iron appeared to be curving right to the flag. However, it hit three inches away and rolled off the back of the green, not even qualifying for closest to the pin and a bottle of champagne.
Don’t forget that after watching the event or your own round, you can stop by the Brooks’ Bar & Deck, selected by the editors of Golf Digest Magazine as one of the “Best Golf Pubs” in the world, and have an amazing view from the patio of the golf course, the lake and the Sierras. There’s a sprawling deck, a vaulted wide-beam ceiling and long-paned windows. Brooks’ also offers a breakfast buffet and wide array of choices for lunch and dinner.

If you have the necessary “Benjamins” and want to be spoiled, I highly recommend that you consider also staying at the Lodge at Edgewood Tahoe, only a short walk away from the clubhouse, if you want a great lodging experience. The standard room rates start at $350 and range to $800 depending on season. Various packages and specials are offered throughout the year.
Designers captured the spirit of storied lodges of the Great American West when it opened in June 2017, being named “Most Beautiful Hotel in Nevada” by Architectural Digest.
The Great Room features 38-foot-tall floor-to-ceiling windows offering scenic views of the lake and the surrounding mountains. The grand staircase was fabricated from local wood logs and the carved limestone wall was created by a Bay Area stone carver. Walnut was used for the paneling of the great hall ceilings and the other walls. The patterns and colors of the deer head art were designed to represent he Native American history of the area.

I was blown away by all the amenities during my one-night stay. The room had a fireplace, a terrace with a seating area where I enjoyed my $20 hamburger ordered from room service, a mini refrigerator and a soaking tub (a great place to relax after a round of golf). I bypassed a chance to make a trip to the casino so I could enjoy all that was offered.
The Coffee Bar is open at 6 a.m. for the early risers and there’s two great places to dine–the Bistro from 7 a.m. to 9 p.m. Sundays through Thursdays and an hour longer on Fridays and Saturdays and the Edgewood Restaurant, opening at 5 p.m. and offering creative dishes from Chef Charles Headstart along with a diverse wine list. If possible, reserve a table just before dark to catch the vibrant Sierra sunset.

At the media outing in June, the menu for lunch included a Pink Pepper Crusted Prime New York Steak or a Pan Seared Line Caught Halibut (my choice) with a delicious Lemon Blueberry Tart for dessert.

There are fire pits outside the lodge en route to the swimming pool, which offers water warmed to the 80s all year, and a 40-person hot tub. Poolside cabanas are also available for rent by the half-day or full day.

Nestled in a private yet expansive area in a peaceful inviting atmosphere on the second floor is the spa that provides guests serenity, relaxation and rejuvenation.
A state-of-the-art fitness center, open 24/7, is located on the third floor, offering the latest equipment, including an adaptive motion trainer, elliptical stationary bikes, glide functional trainers and weight and strength training machines.

The lodge offers courtesy shuttles from 8 a.m. until 11 p.m. every day to the casinos across the street or to other nearby attractions in the summer and to the Heavenly Mountain Gondola in the winter when visitors want to go skiing.

Direct flights to Reno are available from Austin, Dallas and Houston. Then you just drive an hour to find a mountain paradise that blends natural beauty with exquisite comfort.