For most travelers practicing and perfecting their golf game is not the number one reason they come to the Big Island of Hawaii.

But the Fabulous Four Seasons Resort Hualalai on the golf-rich Kona side of the Big Island has a slightly different plan.

The aforementioned sun, beach and drinks are all very much included, but recently the Resort and the surrounding Hualalai community developed an elaborate new $5.25 million dollar golf practice and improvement plan that allows you to get world class golf instruction along with world class luxury and relaxation.

A little Pineapple and Poi with your practice data? 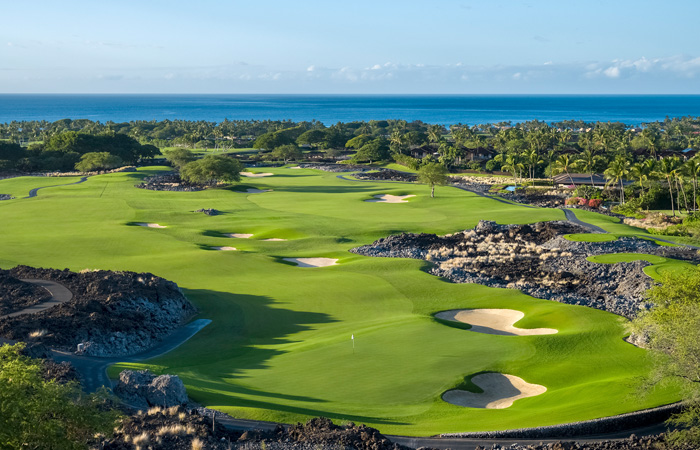 The resort boasts something unique in all of Hawaii or just about any resort destination. They spent millions to touch up the course, plus build and open the Hualalai Golf Hale, which is Hawaiian for house, with enough modern technology to make any local or vacationing Bryson DeChambeau want-a-be lightheaded.

“The best we can hope for is usually seeing a guest twice in a weeklong stay,” said assistant golf instruction director Scott Bridges, a Dallas native who has been here four years. “But this gives them a chance to see and study their swing and then we can play with them here at the courses (there is also a Tom Weiskopf-designed members only Ke’olu course) to work on what they’ve seen or just have more fun with the game.”

All videos and swing instruction are captured on the on-site computer system and can be e-mailed to your room at the resort or your home elsewhere for study and more practice in paradise or your home club.

The Hale originally opened in February 2020, shut down a month later by the COVID-19 Pandemic as was the resort, reopened in December and has been going strong ever since.

“I think people realize that Hawaii and Four Seasons Hualalai is a pretty special place,” Golf Magazine Top 100 teacher Brady Riggs said. “Adding this kind of modern technology to the great golf we have in the area (ultra exclusive Nanea Golf Course is directly across the highway) really gives us an embarrassment of riches.”

Of course what made this golf and resort-loaded area special was the Four Season luxury touches and the scenic Pacific Ocean scenery.

There are 243 rooms in one or two-story bungalows spread across the large complex, all overlooking the ever-churning ocean waters, with multiple resort pools and hot tubs if you get tired from the sand and the sea after a while.

There is a paved walking trail with interpretive signs telling some of the history of the island. There is a huge fish pond where you can actually take part in the daily feeding process or even learn about the local fish and their native habitat under the supervision of a local naturalist. 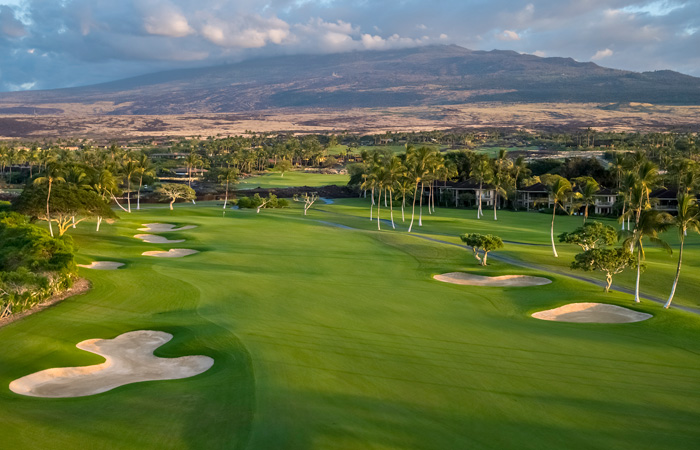 There is a Hawaii history museum on site along with an oyster farm and harvesting along with an expansive spa and workout area. There is even a class with triathlon competitor legend David Scott to discuss the Ironman Triathlon which passes in front of the resort each year.

Of course, if all of this activity makes you a bit hungry, you have a wide array of dining choices as well.

There is the Beach Tree Restaurant which has the feel of a Hawaiian beach house where you can dine on tables placed on the sand or in an open-air dinning rom, the ULU Ocean Grill features RSA which stands for regional, seasonal and artisanal cuisine where the majority of the menu comes from local farms and local waters.

The Haulalai Grill is a classic steakhouse which overlooks the 18th hole of the golf course, but two of the better kept secerts for casual dining are the Residents Beach House which is open to all resort guests for fresh seafood dining and the Haulalai Trading Company perfect for a quick breakfast, lunch or snack during the day.

Included in the 3,000 square foot Golf Hale, which sits next to the range at the Hualalai Golf Club, are three indoor hitting bays, which can be opened or closed. There are TrackMan launch monitors along with flight simulation cameras and a SAMS putting lab, if the familiar adage everything breaks to the ocean isn’t technical enough for you.

If all of the tech offerings aren’t enough fun for you, there is also a Topgolf Swing Suite, where you can play almost any famous course you’d like at any time of the day or night. The building’s lounge and comfort station boasts a full kitchen, beverages, snacks and various sitting areas with large-screen TVs, making a full range of activities from business meetings, team bonding or even golf-themed birthday parties possible.

“There is nothing like this in Hawaii or anywhere close,” said Hualalai GC Director of Golf Brendan Moynahan.

He should know, while the concept was still in the formulative stages, he toured resorts all over the mainland at the request of Haulalai owners, looking for ideas which featured the combination of topflight golf, lodging and high technology instruction. 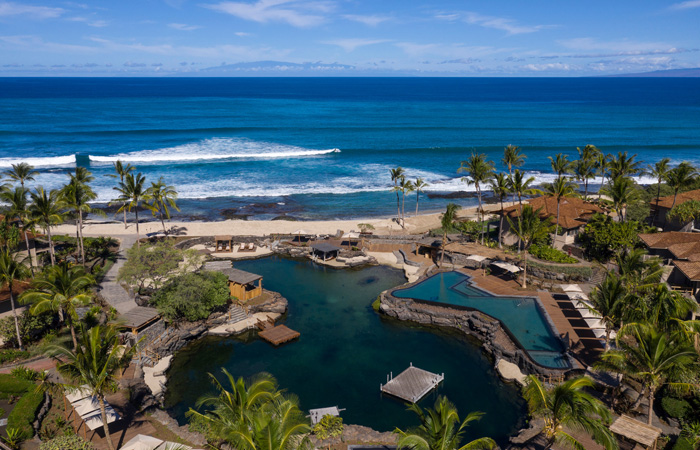 The closest he found was Reynolds Landing between Atlanta and Augusta with the TaylorMade Kingdom. But with PXG Clubs Founder Bob Parsons an active Hualalai member and encourager, it was fitting to build a Pacific replica with the PXG clubs taking the star attraction.

“What I wanted to do was put Hawaii golf instruction on the map,” said Riggs, a Golf Magazine Top 100 teacher since 2007, who spent 28 years in Southern California and is a member of the Southern California Teaching Hall of Fame. “I wanted to bring the best golf technology here along with a practice range where we can lay out 18 holes for a par 3 short course, have music and food, like The Cradle at Pinehurst.”

Of course, Hawaii is already on the map for other sunnier, scenic, and relaxing reasons, but one more golf-related reason to visit can’t hurt.

Practice in paradise for golf and other things never seemed so pleasing or so possible.