Golf in December can mean a lot of things to golfers, depending on where you play on a regular basis.

But golf in December in San Diego means about the same thing it does the rest of the year: perfect conditions, sunny days, light winds and spectacular views of the Pacific Ocean and the adjacent hills and canyons.

For an area which bills itself as, “America’s most livable city,” it’s about as close to truth in advertising, on the golf level, as you will find.

Most golfers get a chance to see San Diego’s Torrey Pines Golf Course, the city-owned course, through four days of national TV coverage during the Farmers Insurance Open, but there is much more to see.

Especially in the wintertime, which makes it a perfect destination for warmth-seeking golfers over the holiday season.

If you need a place to stay and play while in San Diego, one great place to start is the Tom Fazio Grand Del Mar golf course and the adjacent Fairmont Resort.

The Fazio layout and the expansive resort run by the resort leader and the experiences are simply, for lack of a better word, grand. 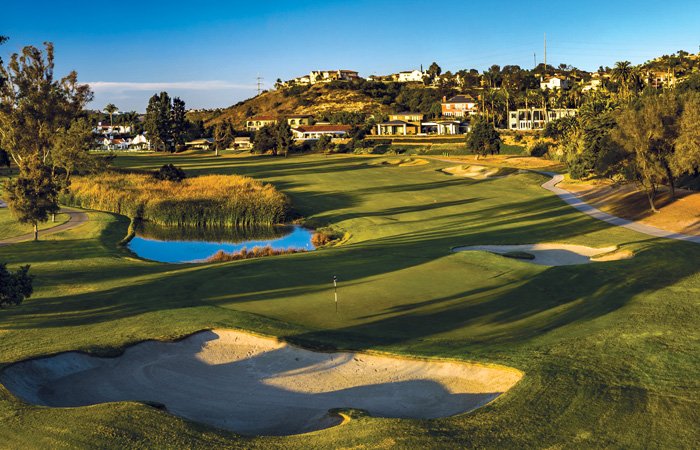 Add an existing Fazio golf course, greatly enhanced with Manchester’s millions, and you have a great entry into the San Diego golf scene already chock-full of great places to play and stay.

The Fazio course, the only one in San Diego, was first built here in 1999 when it was known as Meadows Del Mar, a pleasant enough public layout among the canyons, but with little else.

With Fazio’s blessing, they added some new tees and trees, toughening the course and enhancing its beauty. The biggest change by far was the addition of a multi-million-dollar waterfall, which thunders down from just right of the 18th green and cuts across the 18th fairway. 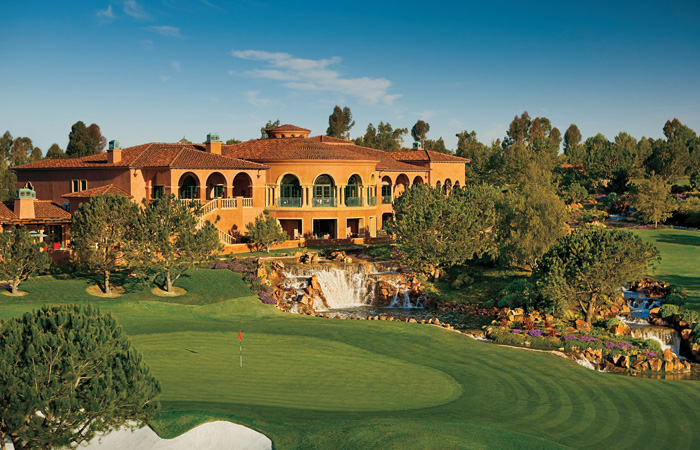 The Grand Director of Golf, Shawn Cox, a longtime fixture of the local golf scene who got his start at Torrey Pines, toured every Fazio water feature in Southern California and Palm Springs, then designed much of the waterfall himself and had his golf superintendent and operations staff build it.

It’s a memorable finish to a most memorable San Diego stay-and-play package.

Another excellent option, the Omni LaCosta Resort, offers 36 holes of great golf on one of San Diego’s most historic courses.

LaCosta, which provides two challenging courses, was the original home of Palm Springs’ big money crowd, which would come here for gambling and golf in the 1950s. It’s the former site of PGA Tour and World Golf Championship events, including Tiger Woods’ memorable win in the 1997 Mercedes Championship. That’s when Tiger, in his first full year on the PGA Tour, delivered a dart to two feet of the pin on the par-3 16th in a rare driving rainstorm to defeat Tom Lehman.

One of the enduring charms of golf is that you can still hit the same shots from the same place as golf’s greatest players and, even today, golfers line up to try to hit the same shot Woods did over a huge pond. Although rarely to two feet like he did and rarely, because it’s San Diego, in a driving rainstorm, either.

LaCosta also features a world-famous spa, elegant lodging in low adobe buildings, and the mental teaching of certified golf addict and noted mystic, Deepak Chopra. Plus, you have a chance of having Marcus Allen hold the door open for you at the valet line (really, it happened). 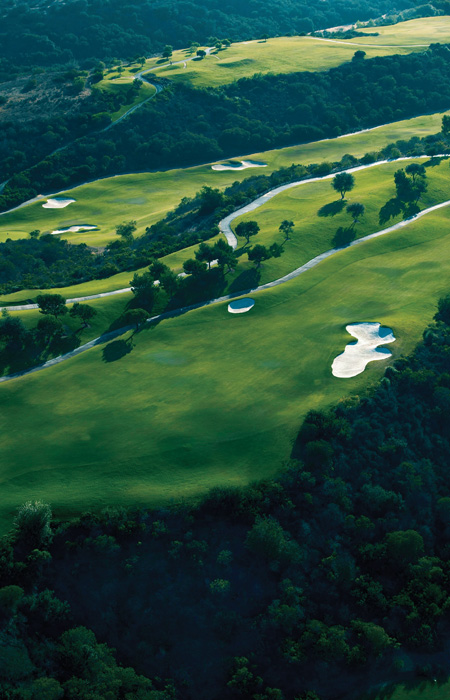 A planned Gil Hanse renovation will bring a modern shine to the entire golf facility and ensure LaCosta will endure for the next generation of golfers.

Another excellent stay-and-play option is San Diego’s most recognizable course at Torrey Pines.

The course, which has hosted the PGA Tour’s Buick Invitational (now named the Farmers Insurance Open) since 1968 and produced professional golfers like San Diego natives Billy Casper and Phil Mickelson, will shatter all your misconceptions about poor municipal layouts.

The 36-hole complex, opened in the early 1950s, offers both the North and South Course and both are always in excellent shape. There are plenty of rough, lush fairways, trees everywhere, lots of bunkers and sand and plenty of golf history everywhere. 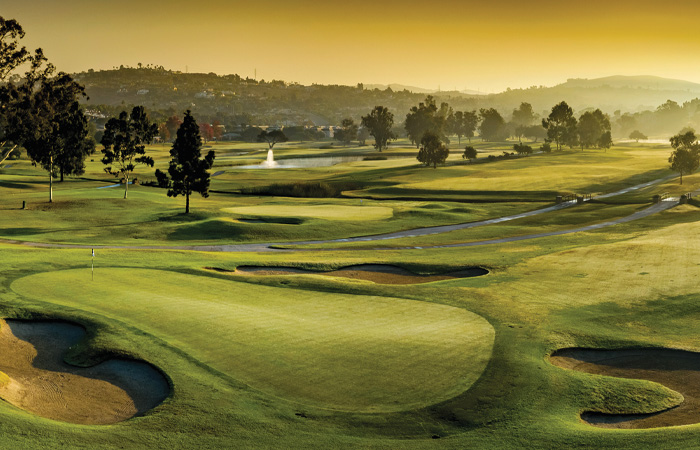 It was the South Course where Tiger Woods shot a third-round 62 to win the 1999 Buick Invitational and the same course where Mickelson, the hometown hero, stopped Woods’ six-tournament winning streak at the 2000 tournament.

The South Couse, which hosted the U.S. Open this year, gets the most play, but both are outstanding.

But what sets Torrey Pines apart from most of its competitors, municipal or otherwise, is the spectacular natural scenery the course is laid out on. On the South Course, there are seven holes with direct views of the Pacific Ocean, a hundred yards below the links with several more with views of a huge natural canyon with the nearby mountains almost always in the background.

Add to that all manner of activities in the skies over the course – from hang gilders who float lazily over the course from their next-door launching station to screaming jets from the nearby Top Gun Fighter School, to slowly moving helicopters headed to their next duty assignments at one of the area’s many military bases.

While PGA Tour golfers play both courses during their annual visit in February, the South Course always hosts the last two rounds and should be the first choice of golfers making their initial visit to the facility located in the exclusive section of San Diego known as La Jolla.

Much like the PGA Frisco complex will be when it opens next year, San Diego (or Frisco) residents pay a greatly reduced rate to play the South Course, currently $63 and $78 on the weekdays and weekends. While outsiders (think anybody outside of Frisco or San Diego) pay $202 and $253. Both groups usually think they are getting a good deal.

The most famous single hole is the par-3 16th, which is slightly uphill at 205 yards from the back tees, offers the last good look at the ocean and a good chance for par or birdie provided you can hit the narrow green with your first shot from the tee box.

Jon Rahm carded a two here in his late charge to claim the U.S. Open title. Dallas’ Bryson DeChambeau made a 7. You can guess which score is made more often.

The finishing 18th is a par 5 with plenty of trees, rough and sand on the right side, brush and more trees on the right. A small pond sits just left of the green and has drowned the hopes of more than a couple of golfers, pro and amateurs aiming for a big finish.

There is a large Hilton Hotel located just to the right of the 18th fairway (with guaranteed tee times) and a newer and more expensive Lodge at Torrey Pines located next to the 18th green. Both allow you to walk to your room after a round or two at Torrey.

Other great places to play are The Aviara Golf Club, an Arnold Palmer design which is like playing golf in a botanical garden, according to one golf pro. The 7,007-yard, par-72 course is extensively landscaped with flowers, water features and distant ocean views, helping to take the sting out of any poor shots. 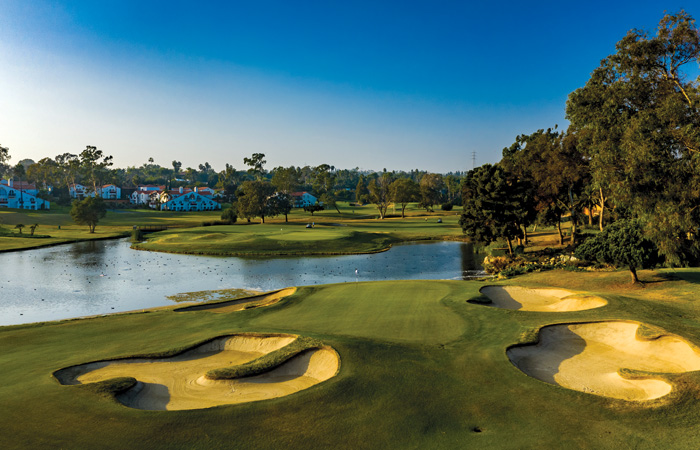 Continuing with the stay-and play-theme, there is the Park Hyatt Aviara Resort just up the hill from the golf course where you can toast to your good fortune of spending the winter in San Diego. You can also enjoy outdoor dining with amazing views of the ocean and the mountains.

If you’re looking for some private club golf, the spectacular and wildly underrated Del Mar Country Club has limited outside play, close to the racetrack of the same name where legendary entertainer Bing Crosby once owned an interest. The Joe Lee-designed course is routed into the adjacent canyons and follows the valley floor.

Every hole is a signature of great golf and better views, with the huge multi-story clubhouse looking like a set from Southern California mansion movies.

Be warned: there is simply too much good golf and good weather for just one trip, however. You’re forced to pick an area and courses, before moving on to another for your next trip. But all golfers should have such tough choices. Right?

The winter in San Diego is just one of them.