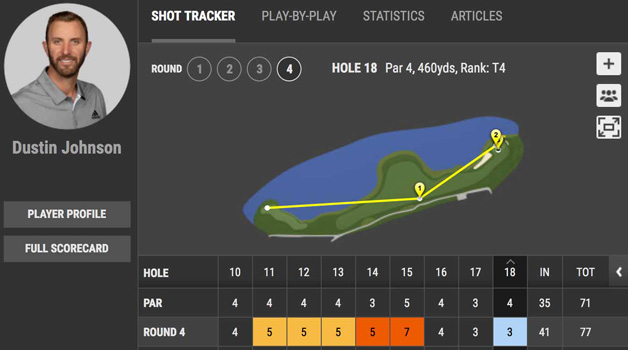 Dustin Johnson is the #1 ranked player in the world. So when he entered the final round with the 54-hole lead at the RBC Heritage, chances were pretty good he’d be in good shape coming up to the last hole.

10 — Additional number of shots Sunday D.J. took on holes 11-15 versus Saturday D.J. Saturday, Johnson went par-par-birdie-birdie-birdie on the five-hole stretch. Sunday was a disaster on those same holes: bogey-bogey-bogey-double-double. No coincidence that he shot 68 on Saturday and 77 on Sunday.

1 — Number of players in the field that Johnson beat on Sunday. Satoshi Kodaira had a rough one, finishing with an 11-over 82. Johnson and four others (Cody Gribble, Mackenzie Hughes, Nick Taylor and Charley Hoffman) shot 77.

3 — Times Johnson has shot 77 or higher when holding the 54-hole lead. No other PGA Tour player has accomplished that feat more than once in the last 15 years, per Justin Ray. Johnson also stumbled at the 2010 U.S. Open at Pebble Beach and lost a big lead at the 2017 WGC-HSBC Champions.

Today was the third time Dustin Johnson shot 77 or worse in the final round of a PGA Tour event in which he held the 54-hole lead (’10 US Open, ’17 WGC-HSBC). In the last 15 years, no other player has done that more than once.

Rest assured, Dustin won’t fret over this as one of his biggest assets is owning quick amnesia. Yet, there’s this…

DJ’s 77 on Sunday matched his highest score in the last two seasons. It was his third 77 in that span (110 rounds). He started the day with the lead each time.

Anyway, below is a more positive stat if Johnson could’ve hung on.