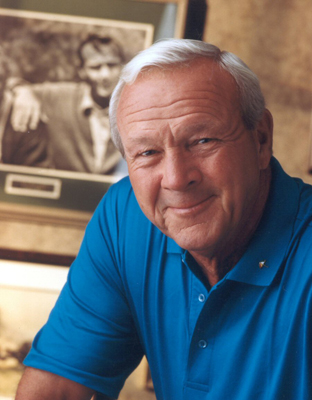 Arnold Palmer (or actually his estate) was the 2nd largest earner among Forbes’ “dead celebrities” list. He trails only Michael Jackson.

Michael Jackson tops our Halloween-spooky list of the 13 highest-paid dead celebrities for the fifth year in a row–with earnings of $75 million. His postmortem empire is going strong, boosted by the Halloween special and new album Scream joining a list of ventures that include a Cirque du Soleil show in Las Vegas and a stake in the EMI music-publishing catalogue.

Golf legend Arnold Palmer claims the No. 2 spot with $40 million. Barely a year after his death, more than 400 stores still sell Palmer-branded apparel in Asia, and AriZona Beverages produces 400 million cans of its Arnold Palmer line annually. Peanuts creator Charles Schulz ranks third with income of $38 million—MetLife recently retired Snoopy and Charlie Brown from its ad campaigns, but the cartoonist’s contract does not expire until 2019.

Elvis Presley finishes fourth with $35 million, up from last year’s $27 million sum thanks to the new $45 million Elvis Presley’s Memphis entertainment complex and recently opened hotel The Guesthouse at Graceland.

As for the King of Pop, his 2017 earnings pale in comparison with last year’s $825 million haul—the highest annual total for any entertainer dead or alive—mostly from the sale of his half of the Sony/ATV catalogue. But his $75 million tally this year still places him on par with the seventeenth-best-paid living entertainer, Bruce Springsteen.

Share: Arnold Palmer Is Second In Most Money Earned By “Dead Celebrities”