Sitting just a half hour east of Dallas, in the City of Rockwall, sits a golf course that has spent some time in limbo as of late. Buffalo Creek, which opened back in 1992, has long been owned by Chuck and Betty Perry, but run by a multitude of different management companies. Those companies, at times were more concerned with the bottom line than the overall experience on the links.

After several years, the Perry family has now assumed complete control again, and has chosen KemperSports to oversee the daily operations of the property. In the short time since Kemper took the reins, the course has improved and can now be recognized as one of the better golf experiences east of Dallas proper.

Once managed by American Golf, the course was closed earlier this year in the wake of the COVID-19 pandemic. At that time, the Perry’s decided to pivot and make a change, asking Kemper to come in and take over operations with the idea that they wanted to open as soon as possible. Kemper kept their word and had the course back open by mid-June, allowing players to escape their COVID dungeons and get back out to some fresh air and outdoor time.

The clubhouse at Buffalo Creek is nice, with everything you might need for a round. The merch is limited but available, and the snack bar will provide everything you might need to fuel up pre or post-round. One thing I always notice when I play a golf course are the condition of the golf carts. It may sound ridiculous, but a slow, lumbering, hard to steer cart can really detract from the round. However, at Buffalo, the cart fleet is new and hard to beat. They turn on a dime, have plenty of get-up and even come equipped with a USB charger, in case your phone or speaker starts running low on juice. 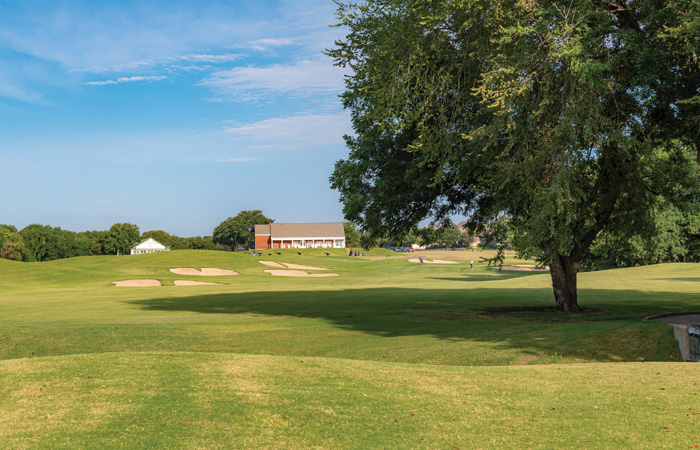 The course itself boasted fine conditions, with lush tee boxes and fairways (even for the August heat), and greens that rolled true if you were able to get putts on a good line. It did appear that the bunkers had recently been re-charged with new sand, which left them soft and a little difficult to judge but let a couple solid rains pack them down a bit and they will be fantastic.

The opening hole is a slight dogleg left, uphill par-four. Big hitters are almost assured of cutting a bit of the corner and getting a scoring club in-hand in the first fairway. Avoid the collection of fairway bunkers on the left for the best approach and a reasonable chance at an opening birdie.

No. 2 is a tough par-four that plays 435 yards from the tips. Favor the left side of the fairway off the tee for the best angle into the green. Beware of the water right of the putting surface, as it can mean a big score on the card.

The opening par-five at Buffalo Creek plays a massive 572-yards from the back tees, and also faces back to the southeast, meaning it will likely play into a prevailing southerly wind. A good tee shot will favor the left center of the fairway and leave a long second shot to a green that is tucked back up to the right behind a collection of guarding trees. A par here is a good number, unless you catch it on a day where the wind is blowing from the north, and then there is a chance to make birdie.

A 227-yard par three follows the first par-5 on the property. This one, again can be tough depending on wind direction. It plays with the predominant southerly wind off the left, which can force balls into a collection of trees or in a backyard to the players right. Middle of the green is a good plan on this hole, and just hope for a two-putt par. 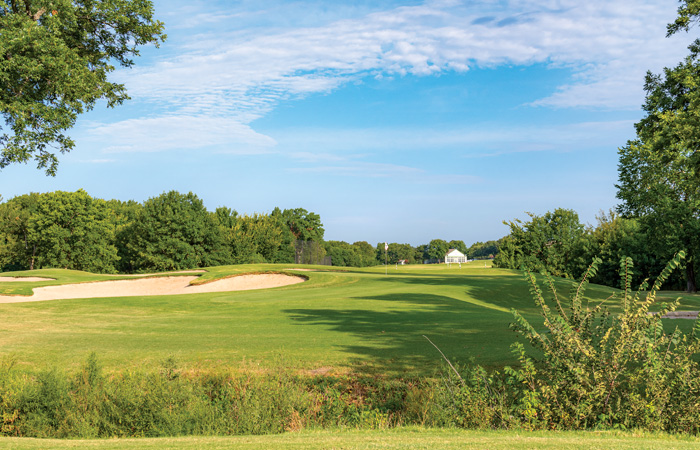 The fifth hole is one of the most interesting of the layout at Buffalo Creek. Playing just 347-yards, this short par four can yield results or disaster. The bombers can get out driver and make a run for the front edge of the green, while those with less confidence in the one-wood can hit a simple iron into the short fairway area and then have a short iron to the putting surface. Those who choose to make a run at the green need to be aware of the drainage culvert that bisects the fairway, as it can swallow up golf balls and make par near impossible. It’s a true risk/reward par four.

No. 6 is the hardest rated hole on the property, and as you stand on the tee box, you will understand why. This long par-four presents a hyper-difficult tee shot with water all down the left that crosses the fairway at the dogleg. Driver is possible, but as the tee shot runs out, the fairway narrows, bringing the water into play. I chose to hit a driving iron off the tee, which left me well back of the water, but a long-iron approach. It’s a fun hole, but one that absolutely commands your attention from tee to green.

If you thought the fun was over after the sixth, then you were wrong, as No. 7 can be every bit as tough, especially off the tee. Water to the right of the fairway will keep right handers who play a cut on their toes as they stick a peg in the ground. A left center shot to the narrow fairway is the play but lose the tee ball a little right and it’s H2-Oh-no. Be careful of missing left, as it’s likely lost in the trees. Between six and seven, this duo of holes will keep you puckered up for just about every shot.

No. 8 is the shortest hole on the course, playing just 156 yards. The main danger for this short iron shot is the large trio bunkers to the left. Find one of them, especially the middle one, and an awkward yardage sand shot awaits, and again, with the fluffy sand, it can be tough to judge just how it will come out. It’s a cool little par 3. 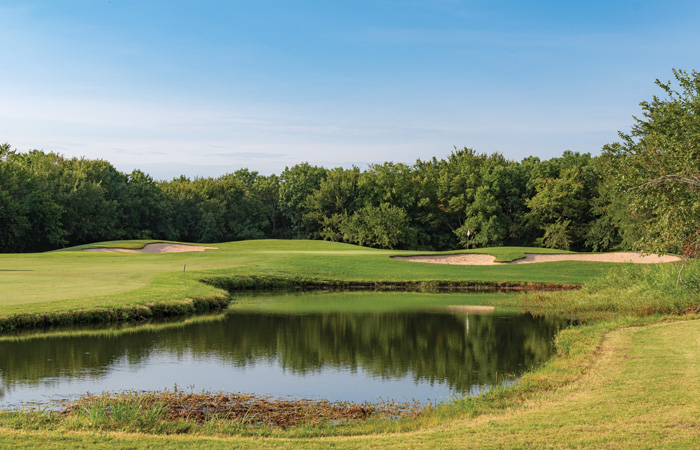 The final hole of the opening nine is the number five handicap on the course. There is some room to miss a little left off the tee, but it may take a minute to locate your ball among the wayward shots from the driving range. A right-center tee ball offers the best angle to the green and watch out for the bunkers that guard the putting surface.

The back nine at Buffalo Creek offers a few more opportunities to score, in my opinion. The 10th is a slight dogleg left that will test any players accuracy. Trees left and Country Club Drive to the right frame this tight par-four. Find the fairway and a mid-iron approach awaits to a green guarded short right with a bunker.

Across the street is the 11th and the first real opportunity to see some of the extraordinary development that has changed the complexion of the property over the years. Houses all along both sides means out of bounds on this par four, which plays as a slight dogleg right. Big hitters can expect a short-iron or a wedge in hand for their second, which can mean a solid opportunity for an early birdie on the back.

The first par-three on the back-nine par 36 layout comes at the 12th. This almost 200 yarder can play as two completely different holes based on pin position. A front left pin is far more accessible, while a back-right pin can be difficult to get to with a bunker guarding the right. A par is a great score here.

The 13th is similar to No. 11, both in yardage and ball flight off the tee. A slight dogleg right is perfect for those who prefer a cut. Avoid the large fairway bunker and players will enjoy a short approach which plays to a green that slopes severely from back to front. Approach shots that come up short with a back pin will really have to give their initial putt some steam to get it all the way up the hill. It’s one of the most interesting greens at Buffalo Creek.

No. 14 is a great chance to score before a tough stretch of finishing holes. A par-five that plays over the crest of a hill allows for maximum roll and a legitimate chance at getting home in two. Players that feel confident in the driver need play their tee ball just over the right side of the cross bunker on the left side. This allows balls to catch a significant speed-slot that adds some 60-70 yards on to most tee shots. Bombers can expect to be hitting something between 9-iron and 7-iron into the green here, hopefully leaving an easy two-putt birdie.

There are a couple different ways to play the long par-four 15th. A small bunker on the right side can collect tee shots and leave a lengthy second shot. Those who can carry the bunker will have a shorter effort, but be mindful not to miss left, as this leaves a tough up-and-down.

One thing on the must-have list for newer courses is a par-5 that measures over 600 yards. Well the design team of Jay Morrish and former PGA TOUR player Tom Weiskopf had the wherewithal to know the game would evolve from a distance standpoint and designed the monster par-five 16th. This hole can give single digit handicappers fits, and for the higher handicapper, well… it can be downright cruel. Water down the left eliminates that miss, and large rolling hills on the right mean those who bail out to avoid the water now risk having a severe sidehill lie. Even those who find the fairway now stand over a heart pounding second shot through a chute of trees. Assuming both the tee shot, and the layup are true, players will find an uphill wedge third which can be difficult to judge. It’s a hole that can turn your round on a dime or win you some dough if you decide to press on the final three holes.

The par-3 17th plays slightly uphill and at about 170-yards is a good test of an iron swing late in the round. A huge bunker to the right of the green can make for a tough par but hit the green and enjoy a relaxed two-putt three as you head to the 18th tee.

The last hole at Buffalo Creek is definitely no cupcake. Playing as the number two handicap, this almost 500-yard par-four can wreck a round in no time. Finding the fairway off the tee is absolutely critical, as right-handed players can sling a cut around the corner and get some extra roll. Watch out for the double-cross, as any tee shot left can find the fairway bunkers shared with No. 1 and leave a near impossible second shot over water, trees and to the tune of about 235 yards… not exactly a shot most amateurs can pull off. Those that find the fairway will be left with a mid-iron over a small creek to a green with another large bunker guarding the front right. It is a hole that will certainly separate the real players from the weekend warriors.

Full disclosure, I didn’t know what to expect for my first visit to Buffalo Creek in almost 20 years, but I was pleasantly surprised that even with the change in management, the course is still worthy of the trip east of Dallas. If you’re looking for a change from the same old metroplex courses, make the short drive and give Buffalo Creek a try. It’s a course with some great opportunities for birdies, as well as some holes that will truly test even the most seasoned ball-strikers.