The Texas Rangers Golf Club has been up and running since 2019. The extensive $24 million renovation of Arlington’s Chester W. Ditto municipal course added another jewel to the City of Arlington’s golf arsenal. Although the course has been open for almost two years, the clubhouse has seen some delays, from torrential rains and freakishly unstable weather, to the COVID-19 pandemic, which further delayed the construction process. In the end, it took longer than hoped, but the payoff was worth the wait. 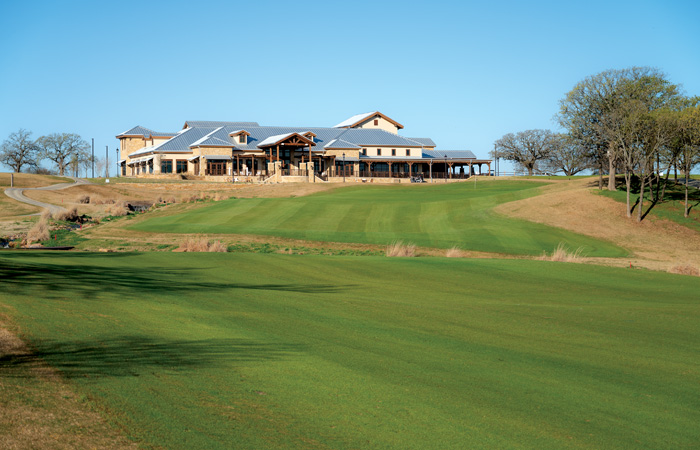 One of the first things you notice when you enter the vast double doors is the bar area off just off of the main foyer. The “Home Plate” bar is stunning. It’s as nice as any sports bar you will ever step foot in, with abundant televisions surrounding the horseshoe shaped bar. On the back wall there is another set of eight TV’s that butt up to one another. These can be programmed to show one specific event in large format, or the individual screens can show multiple channels. This will be perfect for those Sunday morning rounds you finish up right before a noon Cowboys kick during football season. The total number of TV’s is 31, with multiples surrounding the bar top that will keep you entertained as you celebrate your latest sweet round on the course. In addition, the new clubhouse has a great golf shop, with not only everything you would need to prep for your round, but some great Texas Rangers gear as well. 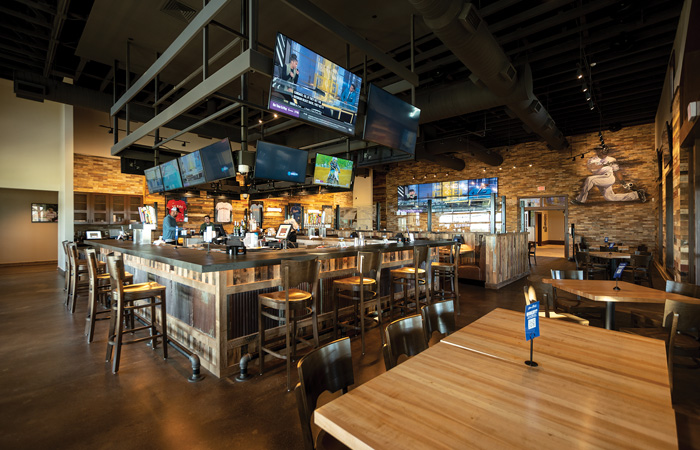 If you are looking for a venue for your next tournament or corporate outing, the new clubhouse features a large banquet hall that is perfect for functions or to settle up scores after a charity scramble. It will also serve as the player hospitality area and check-in for this month’s Korn Ferry event. And if you need an affordable wedding venue, they have your covered, with plenty of room to host the wedding party, and they even have a bridal suite for the ladies to get ready for the exchanging of vows. It is definitely something I wasn’t expecting when I took the guided tour.

“We want this to be a great place to come, not only for golfers, but for everyone. We want people to just pop in and have lunch or watch some games.” Said Greg Durante, who is the Golf Services Manager for the City of Arlington.

There is little doubt that not only will people flock to the property for the great golf, but they will also stop by for a nice meal and a great customer service experience. While the inside of the new clubhouse is certainly special in its own right, I would be remiss if I didn’t brag about what a fantastic patio they have. Not only does the bar area feature a large door that can be raised to make it partially open-air, but they also have a multitude of outdoor seating that is not only perfect for those gorgeous spring days but will serve as a great place to post-up and watch players coming in on No. 9 and No. 18 during the upcoming event. 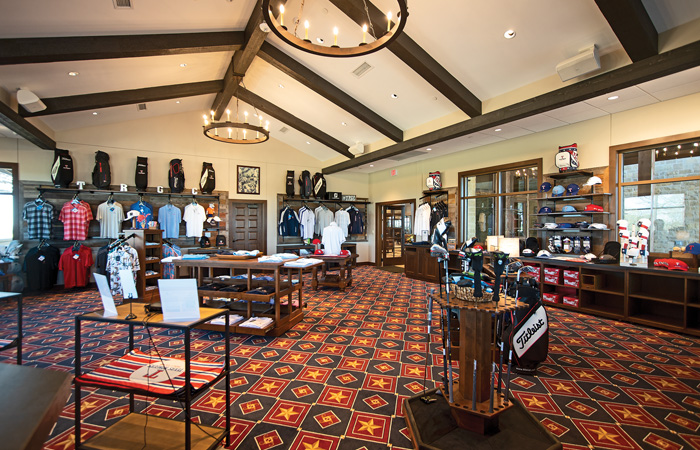 “We’re so excited to finally have a great clubhouse to match the great golf course.” Said Head Pro Bill Ebdon. “We were a little limited in the temporary, but now we are thrilled to show off the new clubhouse and welcome not only Arlington residents, but people from around the Metroplex and around the country.”

As far as the course goes, we have reviewed it before and followed along before, during, and now after the renovation. But the course you know will be a bit different for the Korn Ferry event coming up later this month.

For starters, the nines are going to be flipped. What is typically No. 1 will now play as the tenth, and the tenth hole will be the opening hole. It makes perfect sense because the ninth hole will make a great finishing hole for the tournament due to the fact that is butts right up to the new clubhouse.

With that in mind, let’s take a peek at some holes that could be game changers for the tournament. For starters, the third hole, which typically plays as the 12th, can be a bit dangerous. This tight fairway with OB right can fray the nerves off the tee, and likely won’t yield a ton of birdies. Not only is the tee shot tough, but the green can play downright diabolical, with a couple of distinct tiers that can lead to some iffy attempts to get down in two.

Once the players navigate the 3rd, they will come to what is one of the major changes for the tournament. The 4th hole, which is traditionally played as the 13th and also plays as a par-5, will play as a par-4 for the event. A large pond down the left stares players in the face and requires those that play a cut to hang one over the drink off the tee. A good first shot will lead to a short iron remaining to a green that is cut on a severe downslope where players might consider taking a club less and letting the ball catch the hill and vault onto the green from short of the putting surface. It is a fun hole and one that could really make things interesting on the opening nine.

Another great chance for a birdie will be the final hole of the outward nine, which plays as the 18th for the general public. The speed-slot just over the fairway bunker will rocket balls forward, leaving a short approach that can lead to a potential eagle or kick-in birdie.

As players make their way to the back-nine, a par-5 awaits at the 10th hole, where players will sling a high draw over the corner of the driving range to a mid-iron distance. Another John Colligan funhouse green meets players as they march toward the putting surface, but a shot that finds the proper spot on the green can lead to a reasonable eagle chance.

One of my favorite stretches in Metroplex golf comes from numbers 4,5, and 6, which will play as the 13,14, and 15 during the tournament. The opening par-4 of this three hole stretch features water on the left that is blind from the tee box. Any ball that strays left of the noticeable fairway bunkers will end up finding a watery grave. A tee shot that finds the fairway will leave nothing more than a wedge to the green.

The next hole presents one of the most picturesque tee shots in all of DFW. The elevated tee box frames the split fairway to perfection, with vast bunkering bisecting the fairway. Players who choose the more aggressive left line will be rewarded with a shorter shot, while players choosing to favor the right will be presented with a more awkward angle and a longer approach. It’s another stroke of genius from Colligan.

After back-to-back beautiful par-4’s, the course takes a whimsical turn as a short par-3 awaits. Playing just north of 130 yards from the back tees, this hole features one of the most interesting greens I have ever been privileged to play. Depending on pin placement, this one can be downright comical. A shot that finds the front edge with a back pin will leave a putt that will break seemingly 25 times over a massive camel back. Needless to say, finding the proper portion of the green here is paramount. 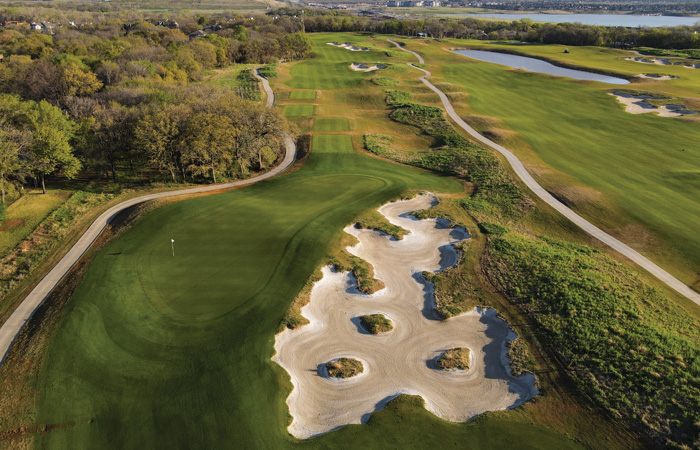 As the players turn for home, there are two final obstacles. The par-4 8th, which will be the penultimate hole for the tournament, could pay extremely long depending on wind. Playing straight south, which is the predominant wind direction, this hole reads at 461, but could easily play closer to 500 yards if the breeze is up.

The last test at Texas Rangers is a hole called “Around the Horn”, and if you have played this wonderful facility, you know how it got the name. This par-5 winds down a hill to the right, and then back up toward the new clubhouse patio. Another tee shot that could potentially play straight into the wind, can lead to a long second or a layup for the Korn Ferry boys. With little or no wind, there is certainly a chance for the long hitters to get home in two, but water left of the green could lead to some shenanigans if there are several players within a shot or two. I expect nothing short of fireworks for the final hole. 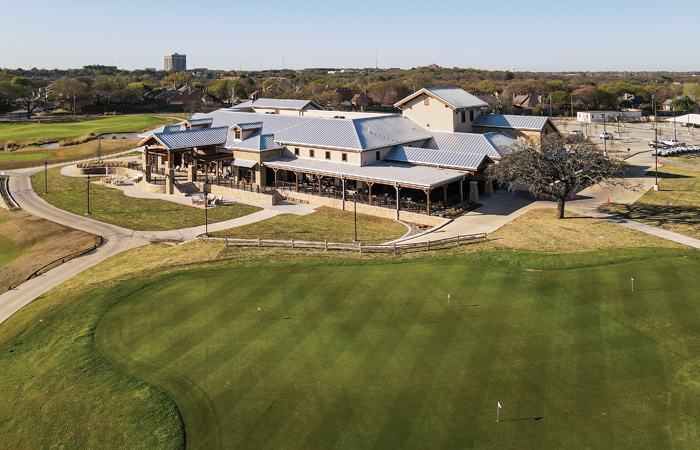 Now that the clubhouse is complete, this facility is simply spectacular. Having been a longtime Arlington resident, I am truly blown away that we have such a special facility right in our own backyard. It is a place I am proud to call my home course, whether it be for a round of golf, some time spent practicing, or now a place to enjoy an ice-cold beverage and watch a ballgame.

If you haven’t made the trip to Texas Rangers Golf Club yet, the time is now. And with the Korn Ferry event on the horizon, you better believe you’re going to enjoy every minute.