Neither golf architect Gil Hanse or PGA of America COO Darrell Crall has any formal training in drama. Crall got plenty of traditional education at Duke University with a degree in history while Hanse has a masters of landscape architecture degree from Cornell University.

But together, along with more than 200 daily workers at the new PGA Frisco golf complex currently underway in the furthest regions of North Frisco, they are building what they hope will be the most drama-producing golf course in North Texas or anywhere else.

“We feel like we’re building some drama here,” Crall said during an exclusive AVIDGOLFER tour of the 660-acre massive facility, which includes the Championship East Course and a second public West Course by architect Beau Welling. Both will be public with limited memberships and both will include caddies.

The East Course by Hanse includes a drivable par 4 on both the front and back nine holes on the former Collin County farmland, plus a nearly 300-yard par 3, along with the largest green on the course followed by the smallest, just to confuse golfers’ already confused minds.

Then, for the closing act, there is the dangerous 17th hole, a par 3. At 150 yards, it is the shortest on the course. Then there is the par 5 18th hole with a large stream and a 10 foot earthen wall you have to hit over to reach the final green after crossing Panther Creek for the final time. 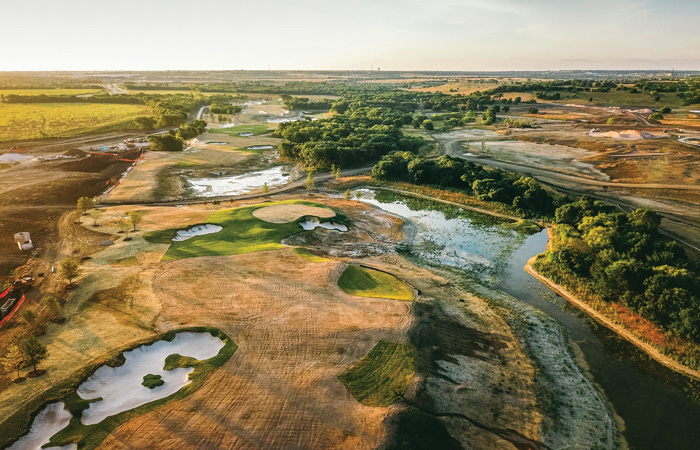 “I think you could have some fireworks there,” Hanse said about his Championship East Course after a recent in-person visit to the project.

Already the PGA of America, who will operate the courses, owned by the city of Frisco and partly funded and developed by Omni hotels with a long-term lease, has scheduled more than 20 professional events here starting with the 2023 Senior PGA Championship. Also included are two PGA Championships, all leading up to the ultimate fireworks and the most anticipated event in North Texas golf history, a possible Ryder Cup (see related sidebar).

Of all the exciting, unanswered and future possible questions for the new PGA Frisco project rapidly taking place in North Frisco, by far the most anticipated and asked question, is the possibility of hosting a future biannual Ryder Cup match here.

While the PGA of America, which controls the U.S. Ryder Cup sites, announced 23 future professional and amateur tournaments on this fertile ground when they first previewed the new site, there was no official word of the Ryder Cup.

There is certainly an open American hosting spot in 2041, a mere two-plus decades from now, and with the PGA eager to showcase their new property it’s not hard to connect the golfing dots.

“Secondly, we want to make sure we don’t want to saddle future PGA leadership with too many decisions we have made.”

But Hanse, who is currently renovating former Ryder Cup and U.S. Open site at Oakland Hills outside of Detroit, has certainly been thinking North Texas Ryder Cup in his design of the championship East Course, especially on the back nine.

The final decision on a Frisco Ryder Cup is years, perhaps even a decade away and may never happen, but it hasn’t stopped anyone connected with the project or anyone eager to watch golf’s greatest, rowdy spectacle to anticipate what would the final piece of the green grass golf jewel which could be here.

While the vast majority of the rounds at PGA Frisco (the individual courses will have specific names in the future) will be played by local golfers or golf tourists from all over the country and world, the chance for professional fireworks from the best players in the world is what has the PGA planners intrigued.

“With the championships already set, we know we have the right team for majors with championship golf from the designers to the builders to all the people who are involved here,” Crall said.

In fact, when Dallas’ Jordan Spieth got his first look at the new course, which is scheduled to host its first official public rounds in 2022, it didn’t take him long to envision the pro golf fireworks.

“With two pars 5s in the first three holes, Jordan said you certainly have a chance to get off to a quick start,” said Northern Texas PGA executive director Mark Harrison, who has toured Spieth and several over local PGA Tour players around the course.

Crall said all the fairway grass, known as NorthBridge Bermuda will be down on the North Texas soil by later this fall, the greens will be Ultra dwarf Bermuda, and the course will be ‘finished,’ giving it a season and a half season to grow in and blossom into a firm and fun and possibly explosive golfing playing field. 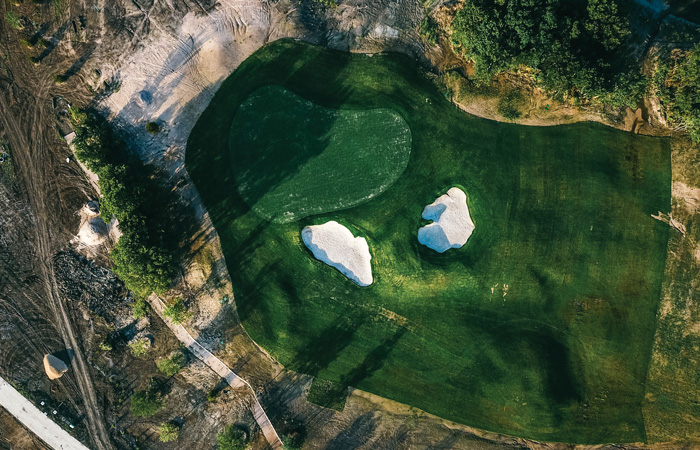 With two of the opening three holes stretching more than 600 yards from the back tees (which can stretch as far as 7800 yards), it doesn’t take long to get into the great golf facility.

First time players will be amazed by the elevation changes in the supposedly flat North Texas landscape and the extensive use of native Panther Creek just like Architect Hanse was.

“Two of the most pleasant surprises since day one was the elevation changes, we had to work with here and Panther Creek which comes into play several times.”

“What we did was find some of the dramatic elements which we enhanced. My partner Jim Wager and I want to create drama here and we want to set up ways for players to win in a positive way. Not for ways for them to lose it.”

The first of the two drivable par-fours comes on the 7th hole which measures just 330 yards from the back tees with plenty of trouble.

“Maybe you’ll see a pro drive the green and putt for eagle like Collin (Morikawa) did at Harding Park,” said Crall. “That would be pretty dramatic.”

At the time of the 2027 PGA, the first held at PGA Frisco, Morikawa will still be just a 30-year-old golfer.

The par 3 8th hole green is totally finished and puttable, the par 5 9th tee box, which features greatly enhanced wetlands to the right, is total dirt.

“That’s just the way they work on the course,” Crall said. “You probably could play 6-7 holes today and it would be fine.” 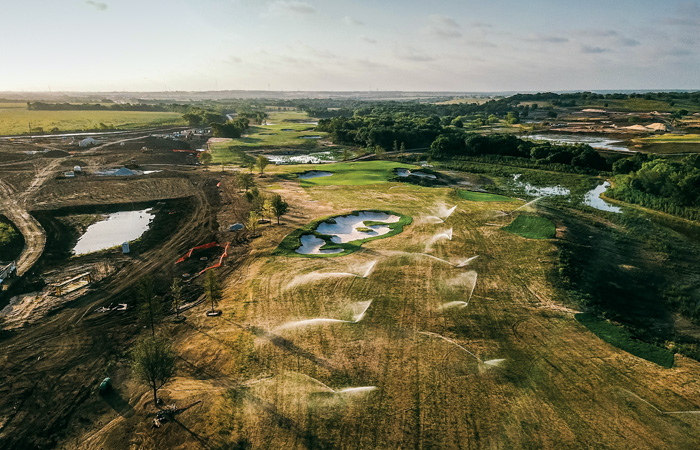 The drama will continue as you come back to the planned clubhouse and massive Omni Resort, neither of which is currently under construction now, as the courses have taken the first priority.

Holes 10-12, all par 4’s, play in full view of the resort, making them prime spots for tournament watching, but players of all skill levels will have their full attention captured when they get to the par 3 13th hole.

From the back tees it can measure 277 yards and often play into a prevailing southwest wind, “that should get the pros attention,” Crall said.

Panther Creek cuts across the fairway and curls up the left side, but it will be one of the most attractive features on the back side. Hanse and his team, along with the hundreds of workers on the course at any one time, strengthened a wall along the left side of the green, to avoid erosion, but used a special texture which will allow natural vegetation to grow in and on the wall.

“Gil and Jim are really good at making a new golf course seem like it has been there a very long time,” said Crall.

The par 4 15th is another drivable par 4 which is surrounded by bunkers to embrace the risk-reward factor. The par 4 16th features an elevated tee to a long par 4. The par 3 17th has a lake cutting into the right side with the par 5 18th allowing two good, but risky shots for pros to reach the green.

Playing from the correct tees will be key for amateur golfer enjoyment, but for the pros all gloves will be off for an 18-hole burst of golfing fireworks. 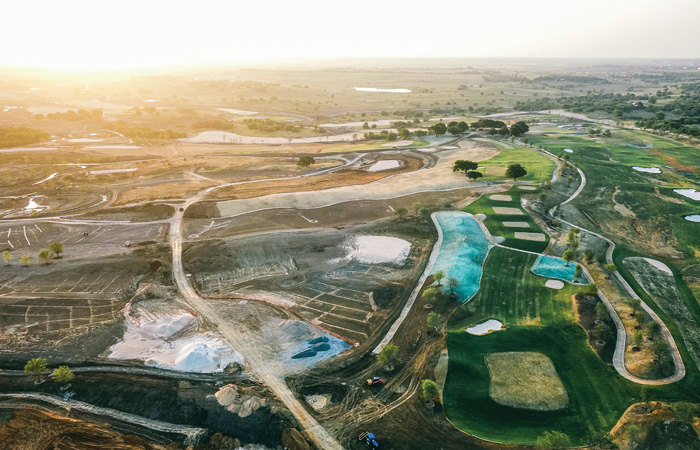 “This is a cherished opportunity to build for championship golf like this,” Hanse said. “These chances don’t come along very often, and we are certainly excited and honored to be a part of it.”

He also allowed the PGA to have maximum flexibility when setting up the course between players happy to break 100, and just advance the ball forward, to the best of the best.

Instead of individual tee boxes as you see on most courses, Hanse designed one long ribbon of tee boxes which can range as long as 100 yards, which allows the PGA to set up the tee for any yardage.

With the NorthBridge Bermuda grass, the fairways can be mowed to be super narrow or wide enough to catch the worst tee balls.

Another key factor for the talented design team, was that Hanse and Kerry Haig, the expert chief set up expert for PGA Championships along with other PGA of America officials, walked the course several times together to plan for crowd movement, sponsor tent housing (West Course) and roping for spectator viewing.

“What we want to do is to learn from others and take advice from experts on how to put on the best tournaments. You know, there is a pretty successful tournament in Augusta, Georgia who does a good job with bleachers in keeping them minimal so we want to try and learn from that,” Crall said.

There is already an extensive network of concrete paths at the course, which can be used for player evacuation or vendor access, missing details which helped sink the Byron Nelson at Trinity Forest, along with plenty of room for a 10-hole, par 3 course with lights in the trees and a fully staffed golf academy. 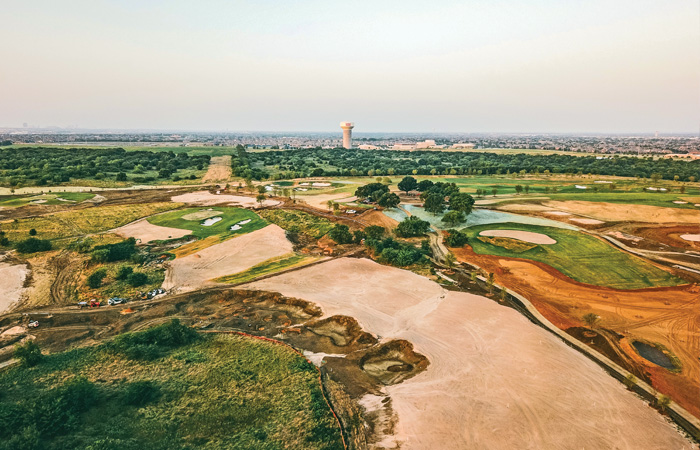 “We want these courses to challenge the best players in the world, but to be open to resort guests and players local and all over the world to be able to come and enjoy this great facility,” said Crall, the former NTPGA Executive Director who has been with the project since it was nothing but a fertile golfing dream.

“With us, the expectation from the PGA was super high. But Gil and our golf course team have exceed it because for them it was a legacy play. What we build will stand the test of time”