Now that the 2018 PGA TOUR season is in the books, it’s time to look forward to the 2019 year. Specifically, we should take a sneak peek at the four majors and their venues. The 2018 season saw Patrick Reed break through at Augusta, the emergence of Brooks Koepka as a superstar with a pair of major wins at the US Open and the PGA Championship, and a red-hot Francesco Molinari hoist the Claret Jug.

In 2019, the PGA TOUR will feature a different schedule, as the PGA Championship moves to May making the British Open the final major of the season. After a 2018 major season that saw Shinnecock Hills, Carnoustie and Bellerive as host sites for the major championships, we take a look at the venues next year’s major championships.

Of course, the one major championship that always remains the same is The Masters. It will always be at Augusta, so there’ not much reason to discuss that venue, as it will be a magnificent test of golf and likely prove once again that The Masters, in fact, doesn’t begin until the back nine on Sunday. This years’ tourney begins on April 11th and runs through the 14th.

Of course, as always, Augusta National is looking to improve this already otherworldly piece of property. Earlier this year, Augusta National filed “preliminary site plans” with the Augusta Planning and Development Department to change the par-4 5th hole. Should that come to fruition, it could be done in time for the 2019 tournament. The Masters tees on this 455-yard, par-4 could be pushed back as much as 30 yards across Old Berckmans Road. The new tee would help prevent some of the congestion at the fourth green and current fifth tee, which are only yards apart. Augusta National has also purchased a plot of land from Augusta Country Club near Amen Corner, but as of now, there aren’t any plans to change any of the holes.

With regards to the field, now that Tiger has officially regained form after a win at last month’s Tour Championship, could the big cat be the front runner to slip on the green jacket for the fifth time? It’s certainly possible and Vegas seems to think so too. At the writing of this article, Tiger was an +850 shot to win the 2019 Masters, which was just a tick ahead of Jordan Spieth’s +900. If you consider what Tiger has been through over the last several years physically, the fact that he’s the outright favorite to win at Augusta next year is absolutely staggering. Mind you, there is still a long way to go before April, but you have to feel good about Tiger’s chances, as long as the back manages to survive his November $10 million showdown with Phil Mickelson in Vegas.

Once The Masters is in the books, the PGA Championship will be next up on the major schedule. As mentioned, this will be a change from previous years. The PGA used to be the final major of the season. The move should help some more southerly venues draw in a major. Southern Hills is one of the southernmost courses on the major championship rotation, and the last time the PGA was contended there in August of 2007 and was the hottest major on record. With temperatures during the final round reaching 102. The 2019 tournament will be held May 16-19. This change in scheduling should at least mean some of the southern venues won’t reach triple-digits if they ever host a PGA. Which should mean more southern courses in the future.

The heat wouldn’t have likely been an issue in 2019 regardless, as the host venue for the PGA Championship is Bethpage Black in New York. Located on Long Island, this is yet another fantastic northeast golf course, and the great thing about Bethpage Black is that anyone can play it. In 2002, Bethpage Black became the first ever publicly owned and operated course to host the United States Open. That year’s tournament was won by Tiger Woods. The US Open again returned in 2009, this time, Lucas Glover claimed the first and only major of his career. 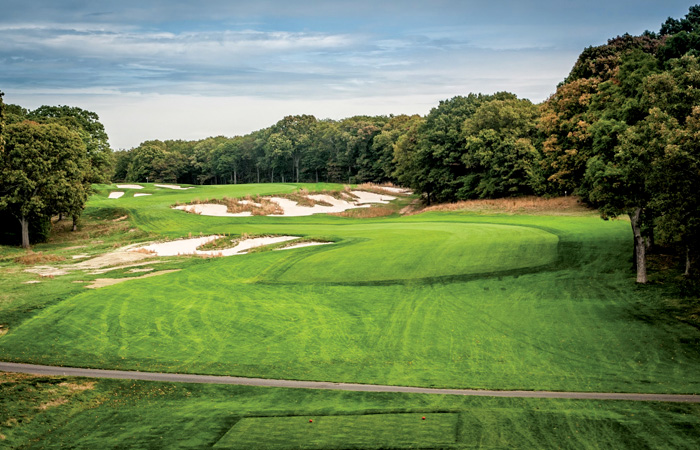 The Black course at Bethpage is about as challenging as major championship venues come, and we can all rest easy knowing that the USGA won’t be able to butcher this A.W. Tillinghast masterpiece. When Bethpage hosted the U.S. Open in 2009, it played at about 7,400 yards. We can only imagine that it will be about the same for next year’s PGA, as this course has plenty of other defenses other than length. Depending on how aggressive the PGA wants to be with the rough, you could see scores in the double digits under par, or not much lower than a couple strokes under. Of course, that’s based on favorable weather. If the wind blows, then who knows? The PGA Championship generally doesn’t play as difficult as the U.S. Open, and the winning scores for both Opens there were -3 and -4. However, the Barclays, which has also been at Bethpage twice, saw winning scores of -10 and -9. So, in all likelihood, it will be somewhere in between.

The United States Open is one of the most entertaining tournaments of the year, and as Roy McAvoy once said in the movie Tin Cup, it’s also the most democratic. You never know who might qualify, although the USGA continuing to lengthen and trick up fantastic golf courses basically eliminates 80 percent of the field. We can only hope that the USGA keeps their paws off of next year’s venue, as it’s one of the most scenic and iconic on the planet. Pebble Beach Golf Links in California has it all. The ocean breeze, the one of a kind Par 3 7th, the majestic 18th hole, with waves crashing into the sea wall as players try to navigate the par 5 finisher. It’s truly one of the most recognizable spots in golf, if not all of sports.

Pebble Beach has hosted 6 total majors, five of which were the Unites States Open. The only outlier was when the course played host to the 1977 PGA Championship, eventually won by Lanny Wadkins.

The champions of the five U.S. Open’s at Pebble read like a golf history book. In 1972, Jack Nicklaus won. In ‘82, it was Tom Watson. Ten years later, Tom Kite took home the hardware. In 2000, Tiger Woods absolutely decimated the field in what many consider the greatest major championship performance of all time. Tiger finished the tournament as the only competitor under par at -12. Miguel Angel Jimenez and Ernie Els finished in a T-2, at +3. A transcendent performance that helped lay the foundation on which Tiger’s legend is constructed. The last time Pebble hosted the U.S. Open was in 2000, this time a wily Irishman named Graeme McDowell took home the crown. A relative unknown at the time, McDowell went on to a pair of PGA tour wins, and four other top-10’s in majors.

Pebble is extraordinary for so many reasons. The setting, the history, the course design. It’s a one-of-a-kind test of golf. Not to mention the laundry list of historic shots the course has seen. From Jack’s 1-iron on the 17th in 1972, to Tiger’s 7-iron on the par-5 6th in 2000, a shot which led NBC announcer Roger Maltbie to exclaim “It’s just not a fair fight!”, to Tom Watson’s miracle chip-in from behind the 17th green in 1982 to secure a win over Nicklaus, golf fans have been witness to some of the game’s most exciting moments at one of it’s most amazing venues.
The fourth and final major venue for the 2019 PGA TOUR season is Royal Portrush Golf Club in Northern Ireland. Site of the Open Championship. This one falls from July 18-21, and will be only the second British Open held at the venue. The first was won by Max Faulkner in 1951. So, it’s been a while since this course has hosted a major.

While not as well known as the other major venues for 2019, this one has plenty of character. The property has two courses, the Valley Links and the Dunluce Links, and the open will take place on both of the courses. Well, sort of. A number of significant course changes are being made to outfit the property for the Open. The 17th and 18th holes of the current Dunluce are being replaced by two new holes (the 7th and 8th) on a piece of the property that is currently part of the Valley Links course. Holes 7 to 16 will be holes 9 to 18 on the redesigned Open course. There will be a number of other changes, including lengthening the 2nd hole and realigning the 10th hole, which will become the new 12th. Par will remain at 72, but the overall length of the course will increase by almost 200 yards to almost 7,400 yards. The total number of bunkers will also increase from 59 to 62.

So, with all the changes, this venue won’t be anything any of the players have seen before. Couple that with the always shaky British Open weather, and we could be looking at the potential for some high scores. But, if the weather holds, per usual, the pros could make this course look easy. Hard to tell with basically a whole new venue.

This will be the third time Royal Melbourne has hosted the event. The 1998 and 2011 versions were also held down-under. In 1998 the International team, led by captain Peter Thomson defeated the Jack Nicklaus led Americans 20.5 t0 11.5. In 2011, the United States’ Fred Couples led squad downed Greg Norman’s Internationals 19-15.

There you have it. Those are your major championship venues for 2019. Will this be the year Tiger gets that 15th major? Will Brooks Koepka go back-to-back-to-back in the United States Open? Will the change in schedule be lauded or revered by golf fans? Or will it impact ratings and interest in the PGA at all? These are the questions to be answered in the 2019 season, but one thing if for certain, the venues are spectacular for the upcoming season’s majors. Augusta National, Bethpage Black, Pebble Beach, and Royal Portrush? Sign us up, and you can bet we’ll be watching.