The Hoag Classic is the PGA Tour Champions’ one stop in Southern California, and in the balmy weather of early March, it makes for some exciting super-star watching given that many big-name professional golfers participate in this event.

The 2020 event featured many legends, including six World Golf Hall of Famers – Fred Couples, Ernie Els, Retief Goosen, Tom Kite, Bernhard Langer and Mark O’Meara. While some of the participants on this Tour are brand new to it – such as the recently-turned-50 Els, some are even in their 70s – for instance Kite and Hale Irwin – making it absolutely remarkable that professional golfers can have careers that span more than five decades.

Many up-and-down performances and multiple surgeries later, do these experienced golfers know their own swings by now, and what might cause their performance or injury issues?

Kirk Triplett, the winner of the Hoag Classic in 2019, said that the No. 1 error that all golfers make is not maintaining the relationship between the head and the ball – if the head moves off the ball in the backswing, it has to move onto the ball the same exact amount to hit the ball solid. Most good golfers’ swings have a very still head with body rotation – no sliding back and forth or moving up and down. With respect to injury, he laughingly said, “What part hasn’t been hurt, after 30 plus years,” and his issues have been mainly in the back, shoulders and elbows. He has found that the less he rotates his body and his core, the more stress he puts on his elbows and shoulders (which he has had surgeries for) to try to get the club to the same impact positions. “That’s just my two cents after 35 years of doing it,” Triplett concluded. 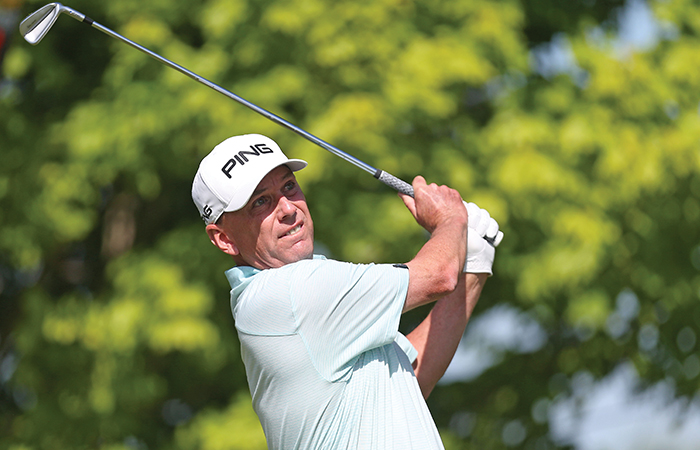 Kevin Sutherland has noted that for him, when his lower body runs out or spins out a little bit underneath his upper body, his club falls behind him and slows down. This has become less of a problem as he’s aged, because the error occurred mainly from trying to swing too hard and hit it with the butt, which then tended to run out too fast. This same movement caused the back issues that he has had, and now he has learned to ease up on lower body movements. He suggests doing drills to learn to sync everything up.

While Chris DiMarco says “I think it’s the brain” regarding any inconsistencies, Els – who won the 2020 Hoag Classic – says he finds that his biggest issue is not staying in the shot and keeping the angle through the shot and follow through. This happens because of a pain in the right side of his lower back and results in his standing up and thus missing right or maybe left. 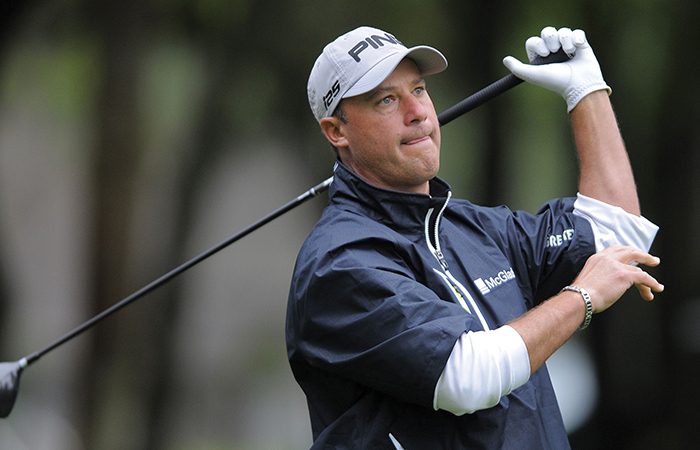 The responses from the experienced golfers of the Champions Tour seem to be very similar to those of players on the PGA TOUR where misses left and right, and injury are especially attributed to issues to the low back.

Is there some common thread that causes both of these to happen?

It is most likely that from the top of a typical golf backswing, in which the trail-side shoulder, hip and knee are higher than the lead side, the muscles on that side of the body have to do a lot of work to drop the trail side down while also producing torso rotation.

So, what can the average golfer learn from the issues that even the very best golfers of the world have? To, in the words of Triplett, be still, with no sliding back and forth or moving up and down.

Dr. Kiran Kanwar, golf swing consultant, is the developer of The Minimalist Golf Swing System – 100 percent scientific, simple and specific. She has MS (sports science and nutrition) and PhD (biomechanics and anatomy) degrees in Kinesiology and is an LPGA Master Professional. Visit her websites www.YourGolfGuru.com and www.mgs.golf