If anyone believes the best roller-coaster rides in California are at the many theme parks that dot the entire landscape of SoCal, they could not be more wrong. The very best ride to be had, for the rare person fortunate enough to experience one, is in a golf cart … being driven up and down the contoured landscape of the Bel Air Country Club in Los Angeles, by that club’s famous golf instructor of 60 years, Eddie Merrins, the “Little Pro.” A pro with the experience and wisdom developed through many decades of golf teaching experience and, as of August 2022, 90 years of life experience.

As he winds his way dexterously around the familiar steep slopes and tight corners of the course in the hilly landscape of Beverly Hills, and through some of the unique narrow tunnels, (one of which was a highly ambitious project when constructed in 1934), Merrins is a walking encyclopedia of fun facts about everything Bel Air and about the game of golf, too. He points out the grand homes of celebrities Alfred Hitchcock, Elvis Presley, Conrad Hilton and Ray Milland. He talks about the stream Tom Fazio helped create that meanders through much of the property; Tom Doak’s idea of taking out some trees to expose the magnificent homes that surround the golf course; and even how Bel Air takes care of their caddies better than any other club in the country. 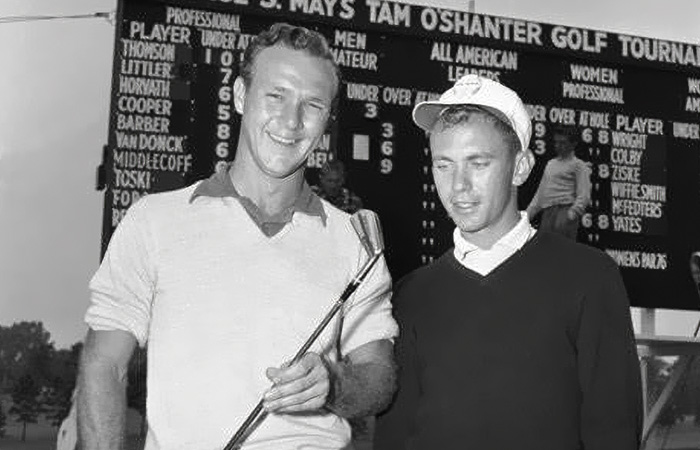 He describes the many challenges of his favorite hole, the 13th, which is the only hole of the five par 3s on the course he has never aced; he explains how Ben Hogan considered the 17th to be one of the best holes he’d ever seen; and also points out the sprawling University of California Los Angeles (UCLA) campus’ many buildings that can be seen from some of the fairways of the front nine. Merrins enthusiastically explains the contribution of his club to improving girls’ golf in Los Angeles, through offering playing facilities to a neighboring girls’ high school. Girls’ schools in LA had no golf until 10 years ago, he adds.

Who is Eddie Merrins and how did he become such a famous and iconic golf instructor? His initiation into golf was as typical as any high school boys could be, and he was introduced to the sport by some high school friends whose parents were members of a local club in his home state of Mississippi. One taste of golf had him giving up all his other sports – both individual and team – to play golf every day, barely missing 25 days a year throughout high school! His big break came when he got his first job as an assistant golf pro at the famed Merion Golf Club in Philadelphia, which he refers to as a “citadel of golf.” There, not only was he exposed to the teachings of Ernest Jones and his theory of “Swing the Clubhead,” but was also given the affectionate moniker, the “Little Pro,” by some club members.

His years at Merion helped him hone what would form his lifelong swing theory of “Swing the Handle” (the opposite of what Jones, and later, Manuel de la Torre taught), and, after stints at a few well-known New York golf clubs, he was invited to Bel Air Country Club to be its second Head Professional in 1962. At Bel Air, Merrins coached the UCLA golf team for 14 years, comprised of many players who went on to become leading professional golfers – Duffy Waldorf, Corey Pavin, Steve Pate and Bob May, among others – and also gave lessons to a wide swathe of members, including many celebrities like Bing Crosby, Clark Gable and George C. Scott.

The keystones of “Swing the Handle” require golfers to ask themselves, “What do I have in my hands?” (the club’s handle); “How should I swing it?” (with the forearms); “What should the forearms do?” (swing the handle from one end of the body to the other, or, to provide a brief geography lesson, if the end of the backswing is New York and the end of the forward swing is Los Angeles, the golfer should swing from NY to LA and go through, not to, Chicago, which is the location of the ball). What is the role of the body in this swing? Every muscle of the body comes into play and, as long as the joints are “free” at all times, the body will respond correctly and turn naturally. 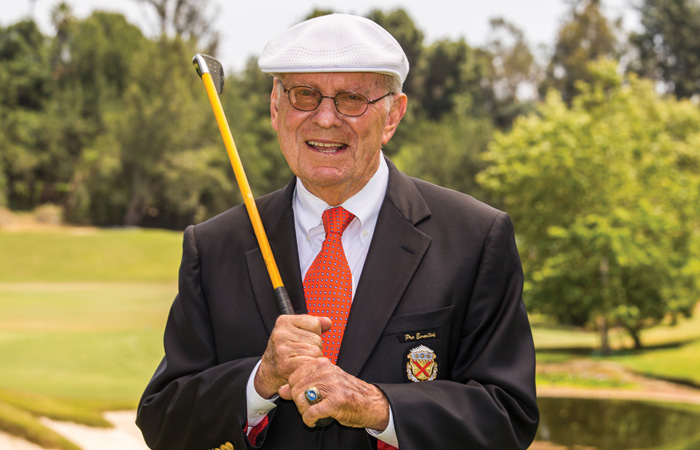 What is his theory for curing a slice, the ball flight dreaded by a large majority of golfers? “I teach them how to draw the ball if they slice or fade it” Merrins says. “It is all about timing and turning the club from one side of the swing to the other. The club should be ‘turned’ a bit sooner as it moves from right to left (for a right-handed golfer) and should be over the left hip sooner in the downswing to cure the slice. It is as simple as applying the ‘pool ball theory’ to straighten out a shot. In pool, if you touch the left side of the ball, it turns right, and vice versa.”

In general, says Merrins, the golf swing is a three-dimensional motion: high, wide, and deep. “High” comes from the hands, wrists and arms, making a hammer-like action. “Wide” comes from the left arm extending like a left jab in the backswing and the right extending similarly in the forward swing. “Deep” is the result of turning the club around the body from right to left and is achieved by the forearms.

Any tips for good putting? A very simple truism that Merrins phrases well, “Read it, roll it, hole it.” While “read it” refers to reading the line and figuring out the strength of the stroke; “roll it” refers to rolling rather than hitting the ball, as all good putters do; and “hole it” is achieved by capturing the feeling of the success of a 4” putt, one that everyone can make.

Does Merrins keep abreast of, and adjust his teaching to, the latest and fast-changing trends in golf instruction and in “technology” (tools for measuring ball aflight and swing variables)?

“I will listen to anybody and what they say and give full credit to them,” he says. “However, I think the swing can be made too complicated and need not be. I’m not much of a believer in technology, although we have all of it here. The ball tells the story, not a theory that comes out of a book. When you see a ball react, the feedback tells you what went wrong.”

No wonder Eddie Merrins has achieved much of the renown and acclaim of his most famous contemporaries from a time when the instructor had just a few simple instructional aphorisms and stuck to them through thick and thin. They did not bend in the breeze like a willow tree and jump from trend to trend and swing theory to swing theory with every new idea proposed. And no wonder the Eddie Merrins Award was recently presented at the Colonial Country Club (with its long-standing association to the Bel Air CC), to the golfer with considerable contributions to junior, collegiate, professional and general golf. No wonder everyone – from member to course maintenance worker to caddie – at Bel Air waves fondly as Mr. Merrins drives by, while he, in true old-world style, waves to every one of them and knows almost all of them by name. The quintessential gentleman, this is a person who dresses in a jacket and tie to give his lessons and is still a believer in letting ladies go first.

So, having authored three well-received books as well as received so much acclaim, what are Eddie Merrins’ plans going forward?

“How many golfers are there in the world?” he asks. When given the number 60 million, he responds, “I’d like to teach them all to swing better with my theory. I will teach till the day they put me in the box.”