Back in the day, there was a saying you might have heard: “Drive for show, putt for dough.” While that saying is still true today, courses are getting longer, and driving isn’t necessarily just for show anymore. Man, does it help if you hit longer drives and are hitting into the green with short irons or wedges instead of longer irons. With that being said, let’s talk about how to create some more power in your golf swing and gain some distance.

PGA TOUR player Cameron Tringale went from being ranked 168th on tour in driving distance to a top 100 ranking in the same category after reworking his swing to be able to generate easier power from the ground up. A lot of students I see trying to gain distance have too many unnecessary moving parts in their swing, actually hindering them from gaining distance. I also see a lot of them try to create power from the top of their backswing and start of their downswing by rotating their shoulders to start their downswing; this will surely hurt your distance. 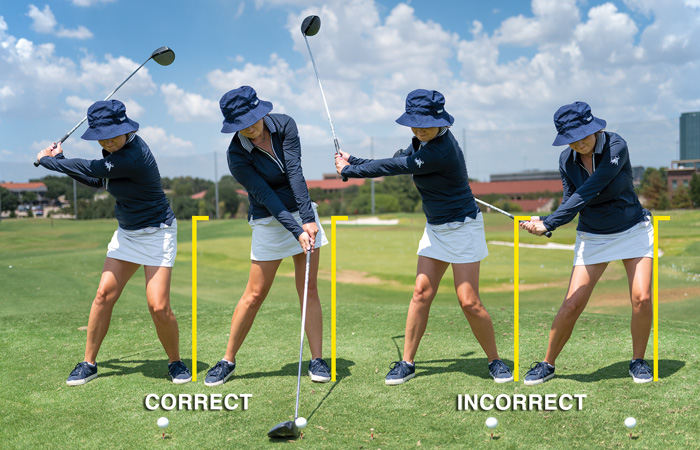 One of my favorite drills, which has been around forever and used by many pros, is the “Squash the Grape Drill.” For this drill, you can place half a tennis ball under the ball of your lead foot, an empty water bottle or simply think about having a grape under your lead heel.

As you go to the top of your backswing, let your lead heel come off the ground, turning your lead hip toward your trail hip and lead knee toward your trail knee. Make sure to do this slowly at first, gradually building up speed. Once you get to the top of your backswing, your lead heel should be completely off the ground. Now, to start the downswing, stomp the grape under your lead heel, squish the water bottle or half tennis ball. This allows you to transfer your weight properly through the ball and generate more efficient power and speed. This drill allows you to create power from the ground up.

Once you have squashed whatever is under your lead heel, think about exploding up from the ground through your lead foot and rotate around your lead leg as if there is a post outside of your lead leg, rather than shifting laterally into that post through impact. 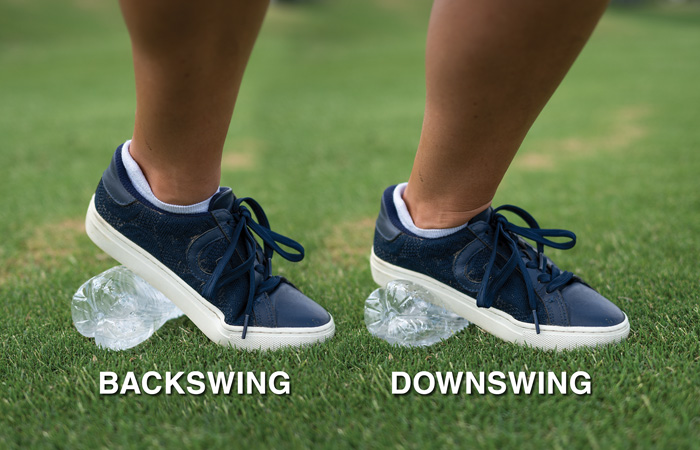 Once you have squashed the water bottle under your lead heel, think about exploding up from the ground through your lead foot and rotate around your lead leg as if there is a post outside of your lead leg, rather than shifting laterally into that post through impact. The picture demonstrates me letting my lead leg extend up after squashing the water bottle and letting my lead hip rotate rather than laterally shift through the yellow post through impact drawn against my hip. If you shift too much laterally forward through impact and have no hip rotation with the driver, it can cause you to have a descending angle of attack, creating more backspin, thus losing distance and causing you to have more right misses (if you are a right-handed player). Squashing the grape under the lead heel and then rotating will help you have more of an ascending angle of attack and create more speed to hit bombs.