It all began when the LPGA Professionals (the teaching and coaching arm of the LPGA) arranged a webinar on club fitting for its members. The speaker gave one of the most clear and meaningful presentations I have ever heard – in golf and in academia. He explained that since he was a kid watching fitters to the Tour players go in and out of the equipment vans making small tweaks, he believed every golfer was worthy of as much detail. He then outlined his five main steps in the fitting process and the reasons for why he prefers to consider one aspect before another.

The first thing he fits is the shaft. The shaft is the timing device that can get a golfer swinging at his or her fastest, freest and most consistent, with respect to both speed and shot shape. If a golfer has the correct shaft stiffness and launch (kick point) for maximum shot speed, consistency and efficiency (ball speed divided by club speed, also known as smash factor), then only will he begin to dial in the correct head. He does not try to fit shot shape or spin with the shaft.

With the head, which he looks at next, he tries to fix spin and ball flight – in terms of trajectory and even direction. The third thing this fitter-par-excellence looks at is loft and lie. Lie is easy to fix, and it’s done toward the end of a fitting. If a lie is too flat, the ball moves right; and if too upright, the ball moves left. Knowing that makes lie-fitting simple. Next, if the ball’s launch is not fixed with a different shaft, it can be fixed with clubface loft. With a loft change, it is important to check the gaps between all the irons in the bag. 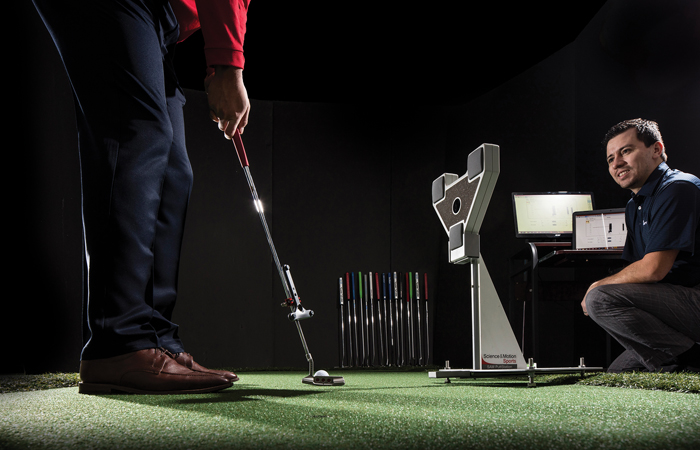 The next, a very important factor to check, is a club’s swing-weight. It is not easy to make sure clubs match on that, so many fitters might avoid that part of the fitting … or might just change out a grip to improve it. Swing-weight is the balance of the club, and according to our master-fitter, it is the marriage between the shaft and the head and determines how well a club will play. Given that according to the famous Sir Isaac Newton, greater mass equals greater force, our fitter is in favor of more weight in the clubhead when possible, even if the overall club weight is lighter for some golfers. Overall, he believes, if a golfer has a club with which he or she swings amazingly, that’s the swing-weight to use.

The final item to check is the grip, and that is fit for feel and much more. While the texture does matter, a grip’s size and taper can make a difference, too. A grip’s size can help with a shot’s consistency, speed and shot shape. It is said that with a larger grip, the ball might go right, and with a smaller one than suitable, left. A grip with less taper in the trail hand might help reduce wrist flipping and a hook.

Whew! All this in half an hour? The presentation was made by none other than Nick Sherburne, who has been in the business for over two decades and is the owner of Club Champion, with its 105 stores across the country. His company offers everything from a one-hour putter fit to a 3.5-hour complete bag fit. Extremely intrigued to learn about all the details that go into a club fitting, I asked for a demo and was set up for a fit with one of the company’s best fitters: Kit Mungo at their Agoura Hills, Southern California location.

Kit Mungo has been a club fitter for over 30 years, starting off as a mold maker for Arnold Palmer. He has owned his own van that traveled with the PGA, Champions and LPGA Tours and served as the tooling department for the commercial club lines, helping to fit the personal clubs of the pros. He even had his own club-fitting shop in California, making his own club designs. No wonder he is considered to be a great fitter. Additionally, his middle name is probably Job, because he certainly had the patience to deserve that moniker, starting with my own “gamer” clubs and going through various iterations of shafts and heads … and managing to answer all of my many questions at the same time. 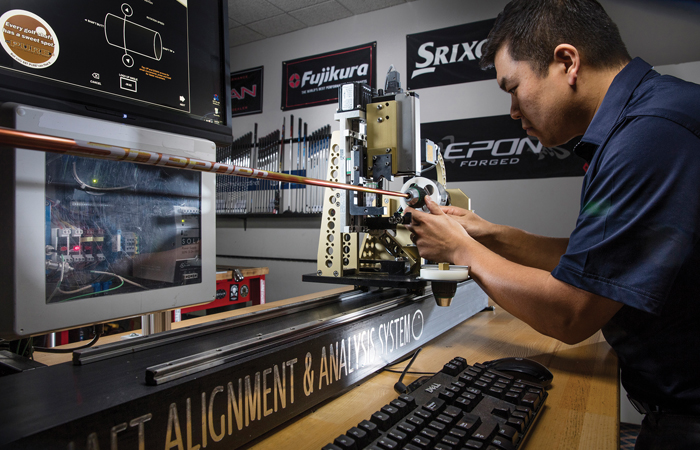 We started with my existing 6-iron, which was measured for its length, loft, lie and swing weight. He first moved me to a shorter and more flexible shaft, which provided a better smash factor but slower speed (shorter shaft). Incidentally, Nick has initiated some artificial intelligence that offers a few starting shaft selections to fitters, based on the 3.5 million swings’ data Club Champion has collected over time. When Kit next changed the head, ball speed increased and a greater launch angle was seen (also a greater descent angle to stick the ball on the green), so he discovered that for me a lighter shaft and swing weight (my gamer was a super head-heavy D6.5) with a lighter head was better.

As I’d asked whether the advertised “for slower clubhead speeds” heads might be better for me, Kit had me try all the heads of the brands I mentioned and others I did not know were also specially meant for those with slower speeds – all the head manufacturers are working on that end of the spectrum these days.

Next, we worked on my woods (as I had no gamer hybrids) and discovered that the 5-hybrid of one brand had all the advantages of my 5-wood (except for club speed from my longer club). Next came the driver testing. Here, what worked best was a 44.5” driver length (I use and teach a swing that requires the golfer to stand as upright as possible, with no chance of a leftward shot, hence my long clubs), with a D1 swing-weight, a 12-degree loft and an A or senior-flexed shaft of 29 grams. I was also asked to check out a few grips, and, even within my preferred brand and texture of grips there were a few options to choose from.

Finally, we spent a lot of time looking at putters I liked the look and feel of, based on first testing my gamer putter. The most important information learned from my gamer was that, while my putting path is dead straight (because I use a straight back and straight through arms-only putting stroke), my clubface naturally rotates from open to closed. For that reason, Kit said a toe-hand putter would suit my stroke better. Sure enough, the hole on their putting mat became a ball-magnet and every single ball started going into the hole 8’ away, with my three “finalist” putters – all large mallet heads. Eventually, a heavier head with an upright shaft was the best fit, given the upright shaft I like to have at address.

The most important learning from the entire experience for me was that when clubs felt slightly heavier in my hands, they would feel less wobbly going back and get me into the specific position I like my top of backswing to be in more easily and consistently. So, despite having believed, for my entire golf teaching career, that I can fix any swing fault with a swing change, the marriage of the best clubs and the best swing can get me making my best possible swings and shots more consistently. And there is no way to achieve that than through a brand-agnostic fitting with a caring, patient club fitter at a facility with an almost infinite variety of options (actually about 65,000 combinations).

Thank you, Nick and Kit. I am forevermore a convert.