Swinging the club back and through is an essential part of the game. Generally speaking, you’d like to swing the club up over your back shoulder, then down to the ground and up again over your front shoulder. That is the description of the golf swing in its most simple form.

The angle on which the club swings up and down is very important relative to the shot that’s struck. The club can either swing too upright, too flat or on the proper plane of the swing. But how do you determine whether the club is too upright or too flat? Or, for that matter, whether it’s swinging on the correct plane?

There have been many books and articles dedicated to the plane of the swing and what’s deemed too upright or too flat. I believe the plane of the swing is established at address by the angle the club shaft sits. From ground level to hip level, the club should swing up this established angle. Underneath the angle is too flat and above it is too upright. From halfway back to the top of the backswing the swing plane moves above the original angle at address but remains parallel to it. Again, if the golf shaft is underneath this angle it’s too flat, and if it’s above the angle it is too upright. The same holds true in the downswing and follow through.

When the club travels too upright to the swing plane there is a tendency to hit too deep in to the ground. With a driver, the downward hit could be the result of a “skied” tee shot. The upright motion also makes the arms and hands work more in a blocking motion entering impact. This can cause the clubface to remain open, with a slice as a strong possibility. 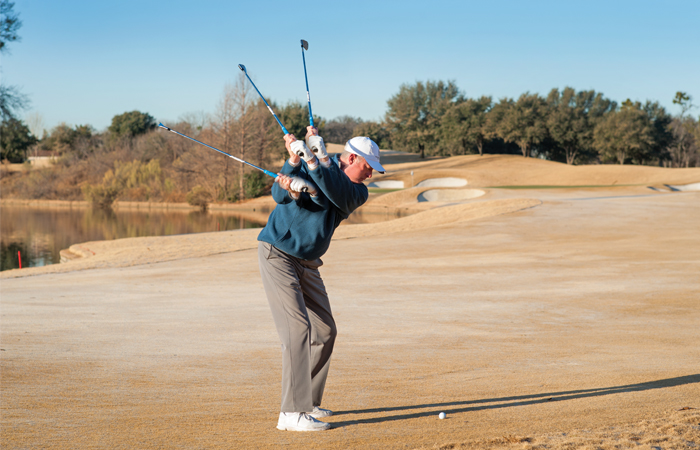 When the club shaft is underneath or too flat to the swing plane, the opposite effect is created. The club has difficulty getting all the way down to the ground. Thin shots are a common result. The club swings on too much of a circle, making it easier to release. This is a recipe for a ball that can hook too much.

A perfect balance is a club that swings up and down the swing plane. This type of swing takes the correct amount of ground and allows the release to be right at ball for a more consistent straight shot. The golf swing is always a balancing act. The closer you stay to the swing plane the more consistent your results will be.