Every January captains of industry, innovators and entrepreneurs gather in Las Vegas for the largest trade show on Earth – CES. The Consumer Electronics Show unveils to the world some of the most incredible, innovative products you’ll see anywhere. With more than 4,000 exhibiting companies and exhibit space of over 2.75 million square feet, CES was bigger than ever this year. We joined with over 180,000 attendees to find voice, connectivity and AI were the focal point of this year’s show. Here are just a few of our favorite innovations and tech trends that came out of the 2018 Consumer Electronics Show.

Voice assistants and AI are learning and evolving at a very rapid rate. This evolutionary technology is now able to make distinctions between different voices. Voice control is being integrated into all types of products. Amazon Alexa and Google Assistant integration was in nearly everything at CES – wearables, headphones, TV remotes, vehicles and even toasters. These voice assistants will soon be included into your car’s dashboard.
Panasonic announced its In-Vehicle Infotainment platform would start to work with both Alexa and Google Assistant via Android Auto. With this integration, you could control music, car temperature, even ask about driving distances or find out what’s on your calendar. There are also external Alexa devices you can add to your car such as Garmin’s Speak Plus which allows for full use of Amazon Alexa as well as a built-in dash cam.

Thanks to more and more companies adopting these new voice assistants, there are now more ways to use your voice to control your home than ever before. Samsung seems to be ahead of the pack, claiming “90 percent of Samsung’s devices are already Internet connected.” The company showed off essentially an entire home of connected devices – an internet-connected washing machine, an updated smart refrigerator, smart speakers plus new smart TVs acting as the hub of it all. Don’t want to shell out a ton of money to get a voice assistant on your TV? Panasonic introduced a new 4K Blu-ray player with Amazon Alexa and Google Assistant integration. If you consider CES as a window into the future, by the year 2020 we will all be living like the Jetsons.

With new TV product lines on display at every major TV manufacturer booth, quite a few are receiving Google Assistant and Amazon Alexa support. LG and Sony both announced select 2018 TVs would include a built-in Google Assistant that can be activated from the remote. This now allows you to do things like launch apps, play music through streaming services, control the smart home or even command the TV to turn off when a show ends. Both TVs also offer hands-free control through Amazon Alexa and Google Home smart speakers.

Almost every TV on display at CES had 4K resolution (some with 8K). The processing power in these 4K TVs is evolving. New processing chips, such as Sony’s X1 and X1 Extreme Processors, take any video content – whether it’s a streaming service, broadcast TV or Blu-ray – and upscale it to near 4K-quality picture. At CES, Sony previewed its new X1 Ultimate processor which provides better remastering of images and is capable of delivering 8K resolution. This is a big deal. The X1 Ultimate is two times more powerful than the current top-of-the-line X1 Extreme. It’s capable of analyzing each object on screen (frame-by-frame) to improve detail and clarity at every step. And it does it fast. 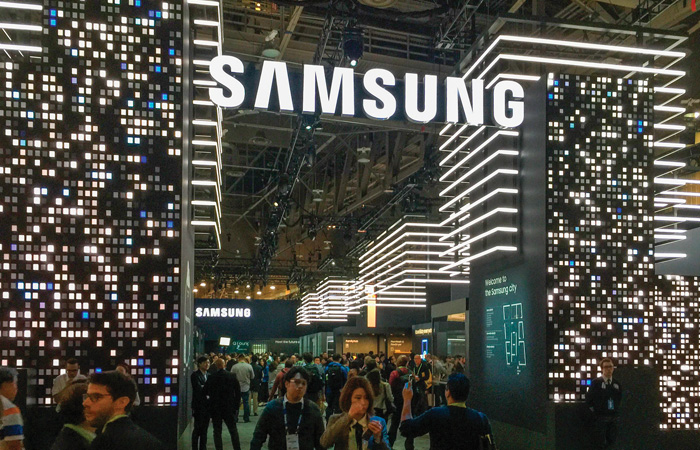 One of the most innovative products we saw at CES came in the form of a wall. Samsung unveiled a massive, 146-inch modular TV called The Wall. Since the TV is modular, you can customize it to be even bigger! According to Samsung, “Users can add or remove modules to make their TV bigger or smaller, in any configuration, removing previous limitations on screen size, with zero impact on performance of the display.”

The big screen is impressive but it’s the technology behind it that makes it unique. Samsung’s brand-new technology is called MicroLED and competes with LG’s OLED (or organic light-emitting diode). From the demo we saw, MicroLED definitely has the potential to match OLED in terms of picture quality. Since each LED can turn on or off individually, MicroLED could offer infinite contrast similar to OLED. The new technology also offers incredible brightness, vibrant color and near-perfect off-angle viewing. Unlike OLED, Samsung promises MicroLED to be brighter and immune to burn-in. The MicroLED technology will make its way to smaller TVs in the next few years according to Samsung. As for the Wall, no pricing or availability was announced.

It’s innovations and products like these that make each CES bigger and better than before. We can’t wait to see what’s in store at CES in 2019.