The PGA Tour’s liveliest – and most well-attended – green grass party is held annually here each February at the Waste Management Phoenix Open, aka the “Greatest Show on Grass.”

It’s where 500,000 of your closest or newest golf party friends gather to celebrate the world’s best golfers showcasing their skills in this warm weather winter golf paradise.

That is all well and good, minus a few advanced hangovers and sunburns, but what if you want to actually play the courses yourself, not just drink and cheer on others?

That’s where the golf-heavy Phoenix-Scottsdale area has you covered on all fronts. With more than 100 courses, 300 days of sunshine and unlimited golf opportunism, it is easy to see why this seemingly endless desert golf buffet never fails to satisfy.

The winter is the most crowded and most expensive time to play, but the shoulder seasons of the late spring and early fall are increasingly popular and even the blasting hot summer can be conquered with plenty of early morning tee times and later afternoon visits to the swimming pool.

Recently, the highest ranked courses in the area and the largest golf manager, Troon Golf, performed a grand transformation to the Troon North Monument Course. It just reopened after a four-month restoration, which resulted in brand new Creeping A4 Bentgrass greens at its par-72 layout. The adjacent Pinnacle course will get a similar treatment later this year while The Phoenician course, also managed by Troon, gets a completely new routing transforming it into an 18-hole championship facility.

“We have plenty of top courses all over Arizona, the U.S. and all over the world for that matter, but the goal and the mission is to always keep them the best possible experience for our members and guests,” said Dana Garmany, Troon CEO, at the grand re-opening of the Troon North Monument Course. 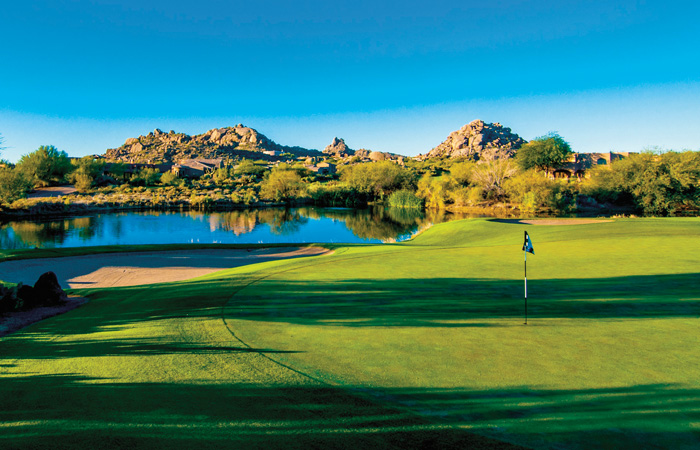 The new greens were the main feature of the desert oasis, along with new bunker drainage, sand and semi-dwarf Bermuda grass collars, at the design of Tom Weiskopf, which take full advantage of the spectacular Valley of the Sun Arizona landscape.

The course draws its name from the huge stone formation on view from many of the tee boxes and fairways, which are equally a monument to Arizona desert beauty.

The new grass, which was laid on all 18 greens and will be installed later on the Pinnacle course, will be hardy enough to thrive under the often-extreme weather conditions and give players the most dependable and consistent putting surface.

“There are so many new, different kinds of grasses out there now and the technology is so advanced from where it once was,” Brad Anderson, Troon’s Senior Agronomist, said. “It’s our goal and challenge to get the best possible conditions on our courses.”

Troon North was one of the first major resorts to open in the Scottsdale area in 1990, but is annually ranked as one of the top in the state and top 100 in the U.S.

With a steady stream of local play and members, the courses also benefit from a partnership with the nearby Four Seasons Resort Scottsdale at Troon North. It provides guests smooth access to the course and the ability for transportation and charging privileges between the resort and the golf facility with the goal to make it a seamless process between both ends.

From your villa room overlooking the mountains, including some rooms with telescopes, a fireplace and plunge pool, there is plenty to like at the resort before you even hit your first ball at Troon North.

The Boulders in North Scottsdale, next to the aptly named town of Carefree, hasn’t undergone any on-course renovations lately after putting millions into its on-course lodging and resort facilities, but the stunning natural scenery doesn’t need an update or change any time soon.
Rarely has a course lived up to its name better than this one with massive stone boulders perched high on the rock walls, which line many of the holes on both the North and South Courses. Except for a good thousand years of natural evidence to the contrary, it looks as if the huge boulders could come crashing down at any moment, where the effect, especially on the South course, is like playing in a massive stone garden on the surface of the moon. 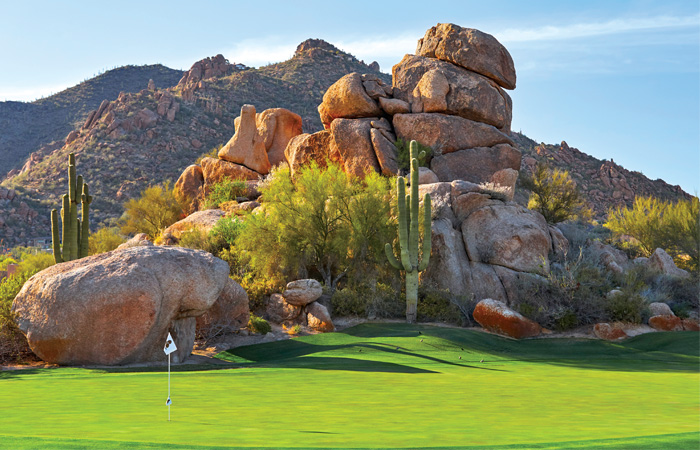 The Westin Kierland Resort and its 27-hole layout, just a few miles away from the TPC Scottsdale and the Phoenix Open, is also a multi-award winner itself thanks to the hard work of club manager Nancy Dickens and her staff.

Kierland has also fully implemented several new ways to get around the golf course these days by including the four wheeled GolfBoard, the big wheel TurfRiders and the two wheeled Segway, all offering different ways to surf the turf on each of the three player-friendly and scenic par-36 nine hole facilities: Ironwood, Acacia and Mesquite.

Another ongoing renovation is at one of the older and nicest resorts in Phoenix, The Phoenician.

The renovation at the course, which is supposed to open later this year, will turn the sometimes confusing three separate nine- hole layouts into one championship 18-hole course, along with on-course villas and rooms at the large resort. The resort was originally financed by local businessman Charles Keating who later went to jail for his less-than-ethical business financing ways.

In addition to the new championship Troon-operated course, there will be a lavish new practice and teaching facility for former Texan, now award-winning Phoenician golf instructor, Michael Lamanna.

The newest and certainly one of the best and most interesting Troon-managed facilities is the Wickenburg Ranch layout in the small town of the same name, just 45 minutes northwest of Scottsdale.

Like many great courses, it has survived its share of financial difficulties at the beginning to transform into a spectacular piece of desert-designed golf by little known local architects Bill Brownlee and Wendell Pickett. Pickett struck golfing gold with his first design at the well spread-out courses in the middle of the Wickenburg mountains.

What’s most promising about the Wickenburg Ranch facility is the nine-hole par 3 course known as, “Li’l Wick,” which includes a large bar and outdoor patio with the idea that golf courses should be fun with friends, first and foremost.

Combine that with a large telescope and area for nighttime viewing in the dark skies making Wickenburg Ranch well worth a trip up Highway 60 for a glimpse into the old Cowboy-influenced Arizona. 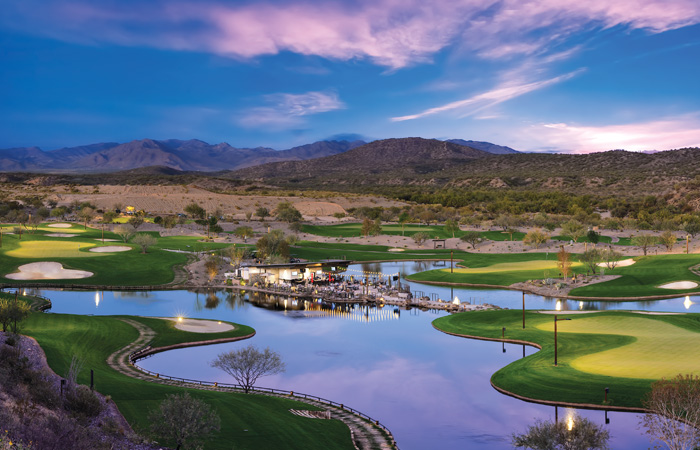 SunRidge Canyon, another fine Troon par-71 property in nearby Fountain Hills, is another great layout placed down on the desert floor like a brilliant green ribbon of grass without many houses to clutter the view.

Most of the houses here are on top of the canyon leaving many of the holes alone in the desert wash and arroyos with a few manmade lakes on the property.

Should you want to play at the site of the Phoenix Open, TPC Scottsdale, and drink by yourself or with a few buddies, instead of the hundreds of thousands, that can be accommodated as well.

The public access course next to the Fairmont Resort, was renovated before the 2018 tournament, won by one-time Phoenix resident Bubba Watson. To perform the renovation, they called on original architect Tom Weiskopf, a local resident, to freshen the look of the TPC. Weiskopf and his team re-grassed all the greens, moved some of the tee locations, and added 250 trees and several bunkers to the par-71 course which plays 7,261 yards from the championship tees.

The course is probably best known for the totally enclosed par- 3 stadium 16th hole and the island green par-5 15th, which was not substantially changed in the Weiskopf redo. In addition to the chance to play where the pros play, you can now eat where the pros eat as the clubhouse has been remolded to include the Toro Restaurant and Rum Bar for post-round celebration and pre-round fuel up.

Other outstanding choices include the We-Ko-Pa Golf Club on a Fort McDowell Yavapai Indian reservation. Texan Ben Crenshaw and Bill Coore designed the Saguaro, to add to the hugely popular Cholla course designed by Scott Miller.

The par 71 layout is classic, scenic desert golf with Crenshaw and Coore’s minimalistic touch on the beautiful landscape. There are plenty of cacti and trouble as you stray off the fairway, but enough desert wash and enchanting views to keep you interested and coming back for more.
Because the course is located on Indian land, there are no homes anywhere to spoil the green grass views like what has happened at equally great, but now cluttered, local layouts.

The adjacent We-Ko-Pa Resort has undergone a name change to match the golf course along with some hotel improvements including a large lobby and fun swim area.

Crenshaw and Coore also did 36 excellent holes at the nearby Talking Stick Course.

Come to drink and watch for one week at the Phoenix Open each winter, but the other 51 weeks of the year will keep you more than busy and green grass golf satisfied.

For more information go to www.troongolf.com.