Despite being nationally known as Dallas’ little brother, Fort Worth has its fair share of iconic spots: the Kimball Art Museum, Joe T. Garcia’s, the Fort Worth Water Gardens. The Stockyards alone are known nationwide. You can’t watch a professional sporting event without the obligatory return from commercial b-roll footage of longhorn steer click-clacking over the red brick streets with Billy Bob’s neons in the background.

What many may not be as familiar with is Fort Worth’s rich golf tradition. Of course, most know about Ben Hogan and his dominance at Colonial. They know about Hogan and Byron Nelson caddying at Glen Gardens in the 1920s. Most have probably heard of Shady Oaks, although many have probably not had the opportunity to tee it up there. It’s as exclusive as it gets in Tarrant County.

However, in Cowtown, it isn’t just the prestigious courses that represent the city and its fine golf heritage. The Fort Worth municipal tracks also ooze with history. Meadowbrook opened in 1922 and was designed by John Bredemus. If that name sounds familiar, it’s because Bredemus was also tasked by Marvin Leonard to route 18 holes along the Trinity River bottoms. That course eventually became known as Colonial Country Club. In addition to Meadowbrook and Colonial, Bredemus also designed another well-known course in Fort Worth: Rockwood Park.

When Rockwood originally opened in 1938, designer Bredemus used some of the natural topography to wind the course throughout the terrain wedged in between the Trinity and Highway 199. Although the Trinity wasn’t brought into play much with the original design, when Ralph Plummer added a third “Blue Nine” in 1964, several holes played next to the iconic waterway, including the notorious 660-plus yard par 5 that locals often say, “took four great shots to reach in three.”

As the city evolved, the Fort Worth Water Department came in and took some of the land adjacent to the Blue Nine, forcing its closure. Then, in 2015, the remaining 18 were closed for a full renovation by John Colligan and Trey Kemp, the project architect, of Colligan Golf Design.

“Golf should be enjoyed, not endured,” is one of John Colligan’s favorite mantras when it comes to white ball. Colligan and Kemp instituted that philosophy throughout the process, and this led to a complete rerouting of much of the old design, with a few nods to some of Bredemus and Plummer’s concepts.

“One of the first things that we noticed about the property was how nice of a site it was,” Kemp said. “While there is a good portion on the front nine that is extremely flat there are also areas of the course that have a lot of natural movement.”

Kemp said they tried to take advantage of that movement and some of the views of downtown, and ended up changing the entire routing. They felt that while there were a few nice holes there before, they created 18 spectacular holes.

Gone is the old No. 1, which used to run north to south right along Jacksboro Highway. Over the years, erosion turned the dogleg left par 5 into a rocky mess along the left side of a hole that was naturally fighting the terrain to begin with. The new No. 1 tees are located right next to the pro shop, and a straightaway par 4 awaits.

There is nothing too crazy to ease your way in. No. 2 is the first par 5 of the round and features a brand-new water feature short of the green. The earth that was removed to create this pond was relocated to other areas on the course to help frame in fairways, making them concaved, allowing more drives to stay in the short stuff. When windy, the second can be a bit tricky, but overall, it’s a gettable par 5.

No. 4 is a behemoth. There’s no other way to put it. It’s a tip of the cap to the monster par 5 that once inflated scores on the Blue Nine. This 611-yarder requires not only brute power, but accuracy as well. A narrow landing area awaits off the tee, and the same newly excavated pond from No. 2 guards the right side of the layup zone and short right of the green. It’s a three-shot par 5 for just about anyone on this planet not named Dustin Johnson or Jamie Sadlowski.

A great view of the downtown skyline and the same water highlight the par-3 fifth. Miss right, and it’s curtains. Get scared and miss left, and the elevated green makes any up and down a formidable challenge. The seventh and eighth holes at the redesigned Rockwood may be my two favorite holes on the course. Seven is an uphill, short par 4, with a split fairway, a bunker in the middle of the dual landing areas and another large pot bunker greenside. Playing just 311 from the back tees, this hole is uphill, but the longer hitters can get one up close to the green. However, if you leave your ball in the deep front trap, it can be a difficult up and down. If you choose to lay back off the tee with a hybrid or an iron, be mindful of the false front on the left side of the green. If you leave your approach short, it has the potential to roll back off the front edge and leave basically the same shot you just hit.

For my money, No. 8 is the most fun hole on the new Rockwood. The downhill par 3 doesn’t have teeth as far as length is concerned, but the green is unlike anything you’ve probably ever seen. If you thought No. 7’s false front was tough, No. 8’s is so severe, it’s visible on Google satellites (no joke, check out Google Earth). It’s a wedge for most, but the funhouse green makes it interesting and visually stimulating. 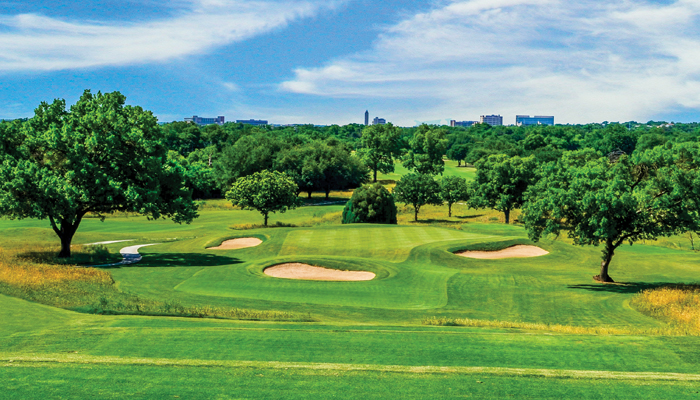 The back nine begins with a fun downhill par 4 with trees lining both sides and a small creek meandering down the left. No. 12 is the longest par 3 on the course, measuring 233 from the tips, although most of the time it will play with the wind. Any pin on the left side of the green is tough to fire at due to a bunker that guards the left. If you miss a little right, more often that not, your ball will get a kick off the hill and work its way back down toward the putting surface.

The par-5 13th is a special hole at Rockwood. Not only because it plays at a manageable distance, but because it also features a piece of history. The rock bridge that once connected holes 11 and 12 remains and carries with it a tangible history. Although, you need to be careful with your second shot into this hole. Colligan uses depth perception to make it seem as the bunkers are greenside, but, they’re about 25 yards short of the putting surface. Find one, and you’ve got the dreaded “I never practice this” 35-yard bunker shot.

The first taste of the old Blue Nine comes at 15. This par 3 used to be No. 2 on the Blue. It’s a long par 3 over a small tributary of the Trinity. It’s a tough hole, and definitely gives you a sample of why locals used to fear playing the Blue. The following hole also used to play on the Blue Nine, a short par 4 with the Trinity directly to the right.

As you finish up your round, 18 is another par 5. At 557 yards, this hole pales in comparison to No. 4 yardage-wise, but it plays uphill, and into a predominantly prevailing south wind. These two aspects can mean this hole plays longer than 4 on windy days. The really interesting thing about 18 is the green. It’s a perfect circle. If you see it from above, it’s actually quite impressive. A huge camel back in the middle makes this a tough two putt, even on some of the short to mid-range efforts.

Taking time to see the brand new Rockwood is certainly worth the trip, and it’s a far cry from the old Rockwood. Colligan and Kemp took some of the natural terrain and really made the most of it with some interesting elevation changes and some outside the box design aspects that really make this a fun, enjoyable course to play. Golf should definitely be enjoyed, not endured. Rockwood knocks Colligan’s credo right out of the park.

Toughest Hole: No. 4, 611-yard par 5 – This hole is just a monster. Players need to be long and accurate to prevent making a real mess of it. The water on the right makes laying up a challenge, and the green is small and two tiered. There’s almost no way to attack it without having to grind. Even a great tee shot means you still have a country mile to the green.

Favorite Hole: No. 8, 142-yard par 3 – This downhill par 3 is the most visible hole from Jacksboro Highway, and is one of the most interesting holes on the course. It’s not long, but the false front on the green is a sight to behold. If you leave your tee shot short when there’s a back pin, you’ll have trouble making par. It’s a great use of the natural topography to add some character to the front nine.

Most Intriguing Hole: No. 13, 540-yard par 5 – This par 5 will usually play downwind. This gives players a legit shot to get home in two. Just be mindful of the bunkers short of the green if you are going to give this one a run. They may look like they are greenside, but they are actually about 25 yards off the front edge. If you end up in one, it’s a tough up and down. PRO TIP: you can hit your ball out to the right of the green and have a fairly simple bump and run chip, or even putt it from off the green. Take the bunkers out of play this way and make it an easy tweeter.