If you have traveled with me then you know that calamity lurks around every corner. My travel journals read like what-not-to-do manuals of white-knuckle road trips. Long hours driving alone, preferably at night, with minimal preparation and without the restrictions of reservations.

Given my expertise in turning short jaunts into epic journeys and AVIDGOLFER’s keen sense of potential train wrecks, Tales from the Back Nine seemed an accident waiting to happen. And, so, it has. Each month we will roam the rural routes, rummaging remote areas off the beaten path for golf adventures that are as much about the journey as the destination.

So, hop in, buckle up, and hold on tight as we venture into the great wide open.

The Panhandle, that 26,000-square-mile rectangle in the northernmost region of our state, is bordered by New Mexico to the west and Oklahoma to the north and east. The lonely blacktops of the Caprock reveal stereotypical snapshots of what the Lone Star State is supposed to look like: Windmills, massive water towers, tumbleweeds, and pump jacks. The landscape, flatter than a tabletop, as James McMurtry sings, is dotted with one-light farm towns.

Mesas and buttes add definition to the otherwise bleak vistas. The rugged land is unforgiving. So is the ever-changing climate. One week before my departure, much of west Texas was blanketed with six inches of snow, accompanied by winds of up to 60 mph. 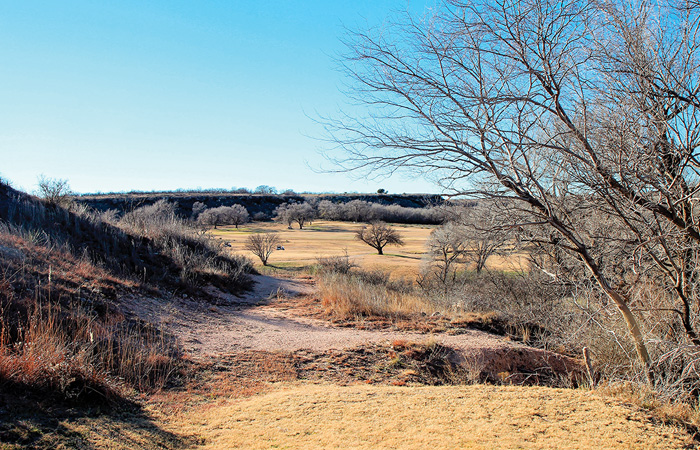 A December visit provided the chance to experience high plains drifting in its most challenging state. You’ve heard of the powerful winds that howl through the canyons. But what’s it like to play golf, or camp and hike in such conditions? I mean, can you go fly fishing without strangling yourself?

Out here in the middle of nowhere, golf abounds. About 70 courses are scattered across the Panhandle. Every other town seems to have a unique nine-hole layout that blends into the natural topography and fits the personality of the community.

In the tiny towns on the outskirts of the region’s three biggest cities – Lubbock and Amarillo in the north to Abilene in the south – fun and affordable golf is proudly offered. Most of these are relatively short nine-holers laid out on windswept mounds or nestled in canyons. Two sets of tees are used to make for an 18-hole round with the different teeing grounds creating significantly different experiences. These courses are perfect for weekend getaways in which you can stack one-hour rounds of golf, camp out, drop a line, hunt for antiques, or check out the historical sites.
My path followed Hwy 287 west toward Decatur then down 281 to 380 – that stretch boasts six courses, and numerous fishing holes were spotted just off the highway on Lake Graham, running west from Graham Country Club. Hang a left at the 251 junction and you’re in the parking lot of a diner in Newcastle staring at a sign that reads: Another Hole in the Wall: where hunters, fishermen and other liars meet. And then you’re inside the cozy place eating a juicy cheeseburger and washing it down with a large iced tea with extra lemon and you believe what the sign says: Texas’ Best Burger.

Back on the desolated blacktop heading west on 380, my truck rolled past seemingly endless cotton fields and ranchland, and golf courses. Stay straight on 380 and you can test your ballstriking on nine-hole layouts in Graham, Haskell and Aspermont. A left on 277 south in Haskell takes you to courses in Stamford and Anson, and from there you can also play in Hamlin and Rotan. But I stayed on 380 toward Jayton, where I planned to set up tent at the Kent County Golf Course. For $15, you can play all day and the green fee you left in the dropbox provides free access to the campground (showers are available). 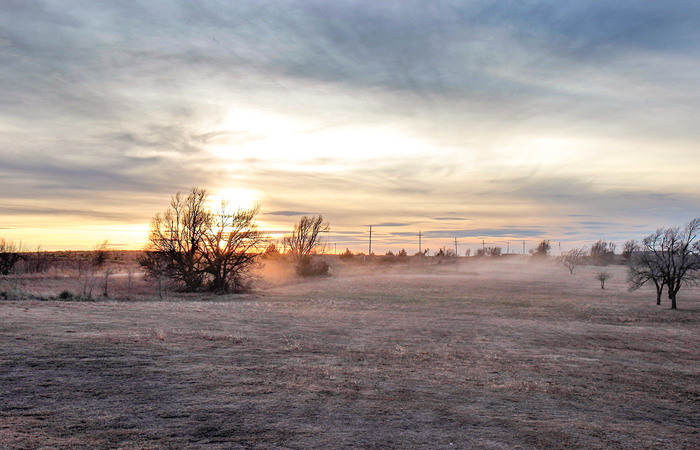 Sticking faithfully to my tradition of never setting up a tent in daylight, I moseyed into Jayton about 7 p.m. Pitch black. No golf course sign. The GPS led me to a senior housing complex. So I went deep into the countryside on two farm roads searching for fairways in the fields. … Nothing.

It was late, I was getting tired of driving, and I had nowhere to stay. I was also low on gas. I pulled over at a picnic spot to regroup. Assuming the GPS was correct, the closest service station was 39 miles away. My gas gauge was flashing “low on fuel.” I tried to do the math: How many miles per gallon does my 2005 F-150 (169,000 miles) get? Who knows? So for 45 minutes, I pleaded with my old truck to not let me down, at least not out here in the middle of nowhere on the darkest night in world history. Finally, lights on the horizon. I pulled into the Phillips station, grabbed a cup of coffee, and pretended that I was not terrified as I filled ‘er up.

Word of caution: These Panhandle towns are surprisingly far apart and just because this is oil country that doesn’t mean 24/7 gas stations and fast-food restaurants are waiting for you. In these rural areas, folks eat at the diner during the day and then downtown is rolled up at night.

When I woke up at the La Quinta Inn in Lubbock, a hard rain had given way to howling winds. Gusts reached 50 mph. Park in the wrong direction and you can hardly open your car door. I found it difficult to stay in the lines on the 47-mile trek to Mount Blanco and neighboring Floydada Country Club.

Mount Blanco is a small white hill, an erosional remnant if you will, on the eastern border of the Llano Estacado. This was the site of the first permanent settlement on the West Texas plains. But reaching the renowned hill was impossible on this day. The four farm roads entering the area had been transformed into thick gooey mud slides.

Nestled in the Blanco Canyon off Hwy. 62 south, Floydada Country Club stands as a golfing oasis. Incorporated in 1925 as a fishing club, the 9-hole, semi-private course features elevation changes of as much as 150 feet. A dry creek runs through the course, adding definition to the hard-running fairway mounds. The greens are immaculate. The canyon walls and tableaus make this a bucket-list stop.

“It’s just such a unique setting down here in the canyon. We’ve lived right across the parking lot for 26 years,” said James McNeil, Floydada CC general manager. “When you’re down here, it kind of gives you the feeling you are somewhere else. You can go on top of the hill and see the lights of Lubbock, or down here it’s more of a hill country feel.”

McNeil said the original course, opened in the early 1930s, had sand greens until 1953, when a makeshift irrigation system was also installed. He still uses part of that watering system.

“An ultra-modern superintendent probably wouldn’t take this job because we don’t have all the nice conveniences,” McNeil said. “We still manually do things and I’m 71 years old. It still means a lot to me. This is my golf course as far as I’m concerned. I told them right from the start that I wasn’t going to take no crap from the board or anybody, I could run this.” 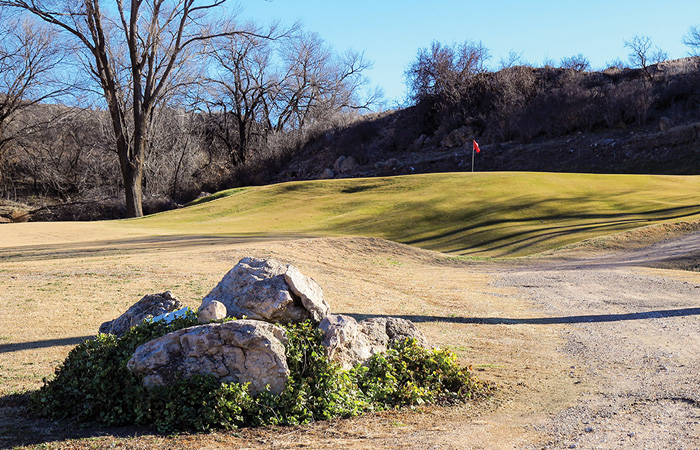 One day McNeil was checking in a seven-member guest group. He asked for each of the players’ names. When he got to the last one, he recognized the face. It was Jim Furyk, ranked No. 5 in the world at the time. McNeil said Furyk has played the course with his Texas rancher buddies three times. Two of his signed scorecards – rounds of 64 and 65 – are displayed in the clubhouse.
“It was not serious golf; there were seven of them and they had 90 beers,” McNeil said. “The first year, he (Furyk) was very courteous and professional. The second and third year, he was just as mouthy as the rest of them. I mean, they were cussing, picking each other’s ball up and throwing it in the water.” 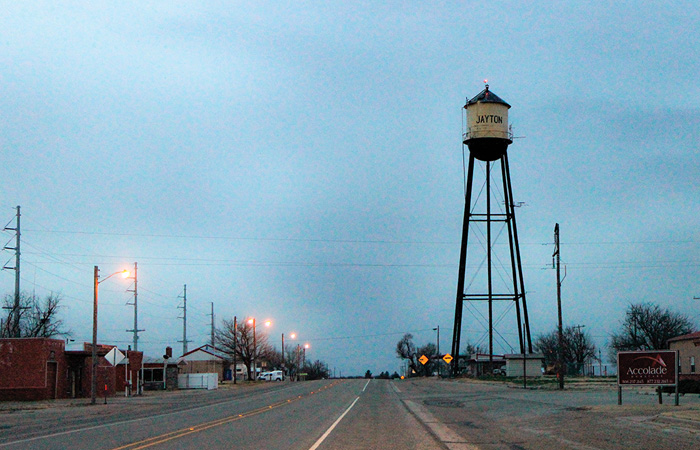 Having decided to spend the night at Caprock Canyons State Park in Quitaque, an hour north of Floydada on Hwy. 207, I failed again to reach my campground before dark. I slipped a registration form in the night box and found a remote spot near the north canyon. As the fire roared, I looked up to find the brightest stars I’ve ever seen glowing in the deep darkness. In the morning, I emerged from my wooded enclave and almost body checked a bison. After a quick hike through the canyon, I was back out on the road, heading north on Hwy. 70.

The 90-minute drive delivered me to Mclean Country Club just before sunset. This course, 80 miles east of Amarillo, is basically the pasture golf prototype: 50-yard wide fairways cut through a sloping wheat field. It is one of only two facilities in Texas with sand greens. There are no green fees. The views on the rolling hills are dramatic. 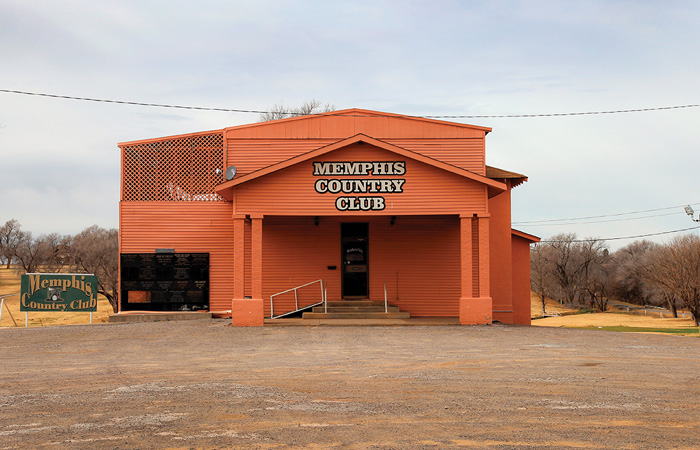 It was dark and cold when I left the course and got back on Hwy. 273 for the five-hour drive home. But as I rolled deeper into the farmland on the lonely two-lane route, the truck’s light began to dim and random warning signs flashed. Then the lights went out and the truck died.

I got out to survey my situation. It was so dark I couldn’t see anything but one light way off in the distance. Fortunately, my phone was at 40 percent and I had a portable charger. I was 18 miles from the closest service station. I called my insurance company and then waited for the tow truck. Two hours later, the truck was in a garage and I was in room 119 at the Travelodge, one of two hotels in Memphis, where I spent two nights. Ray’s Garage got me all fixed up with a new alternator Monday morning. I asked Ray if there was a golf course in Memphis. “Yeah,” he said, pointing, “just down the road. It’s only nine holes, but we have won the state tournament a bunch of times.” 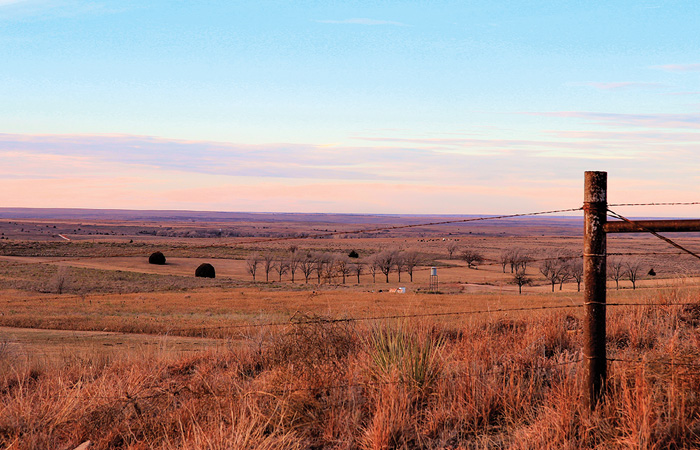 Memphis Country Club proved to be a quaint course with rolling hills, towering trees, and a creek winding through the middle. The semi-private course is tucked into a residential pocket across the street from the school. Street signs warn of errant golf balls. The high school girls’ and boys’ teams have each won four state titles. The plaques are displayed outside the clubhouse.
Memphis wasn’t on my original list of courses, but it is now. When you are searching for golf adventures off the beaten path, sometimes it’s best to just let them come to you.