Hilton Head, the scenic, golf-heavy island which juts into the Atlantic Ocean and the Calibogue Sound, has been known as the low country for centuries for its ebbing tides and the proximally to the water with very little elevation change. It’s the combination of sun, sandy beaches, fresh seafood, not to mention dozens of high profile golf courses which has drawn decades of loyal golfing vacationers to come for the near year-round golf conditions.

But late 2016 brought a new and welcomed concept to the area, true low country luxury as the decidedly upscale Montage hotels combined with the historic Palmetto Bluff community to form the Montage Palmetto Bluff Resort and the May River Golf Club. The 20,000-acre property owned by Crescent Communities, a subsidiary of Duke Energy, has served a variety of uses over more than a century going back to Civil War days where rice dominated the local economy. 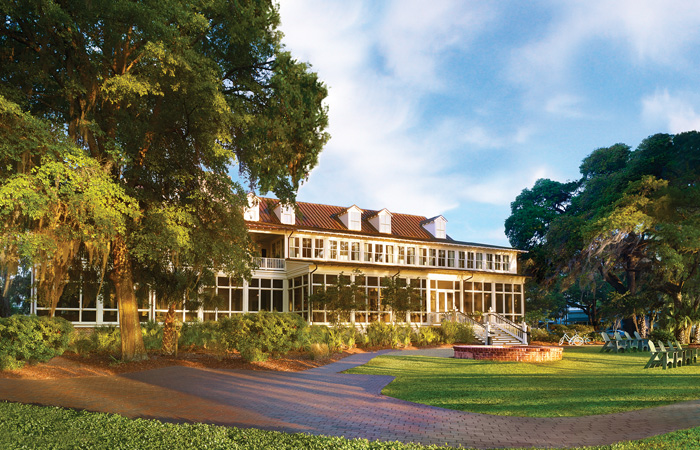 But its latest incarnation is probably its most welcomed and certainly most comforting with a small, three story white paneled hotel which juts out in all directions with most rooms having balconies to overlook the peaceful moss-draped, tree-dense surroundings. What Montage and Crescent have managed to do at the newly renovated facility, formerly known at the Inn at Palmetto, is mold the public resort, which has been greatly enlarged and enhanced by the addition of the Montage brand, around the private housing and cozy active community.

Add a huge wedding venture location next to the resort, along with a man-made lagoon which empties into the May River where the historic cruiser Grace, launched in 1913, can take you all the way to the small town of Bluffton. There you can soak in more great history, better food and relaxing views. But for those staying at Palmetto Bluff, the Jack Nicklaus designed May River Golf Club is a prime attraction. Of course, having a scenic golf course in the Hilton Head area is not great surprise, there are dozens of them sprinkled all over the area, which is what made the area famous in the first place. But what makes May River so much fun is what makes the entire area so inviting. It’s laid back, low key, highly scenic and challenging for good, great and just plain happy to be here golfers.

“We want to make golf fun and we want to make people glad they’re here,” said May River Director of Golf Greg Wrobel, who has been here since the course opened in 2004 and has seen its graceful evolution.

May River, ranked as high as No. 4 in the state, is one of the few courses anywhere in the area which has a caddy for every round of golf, on the par 72 layout which plays 7,171 yards from the back tees. Golfers can choose to walk with a caddy, which since this is the low country, is not overly difficult, but can also ride on a cart and use the caddy to help rake the bunkers, find your errant shots and read your putts. If you could view an aerial map of May River Club, it would look like a dense forest – oaks, pines and palmettos – with 18 slices of green turf carved out. But playing the course itself, the fairways have plenty of width and lots of non-crazy, puttable greens. In 2005, it was awarded Best New Course by Golf Magazine and it’s definitely softer and more laid-back than some earlier Nicklaus designs. 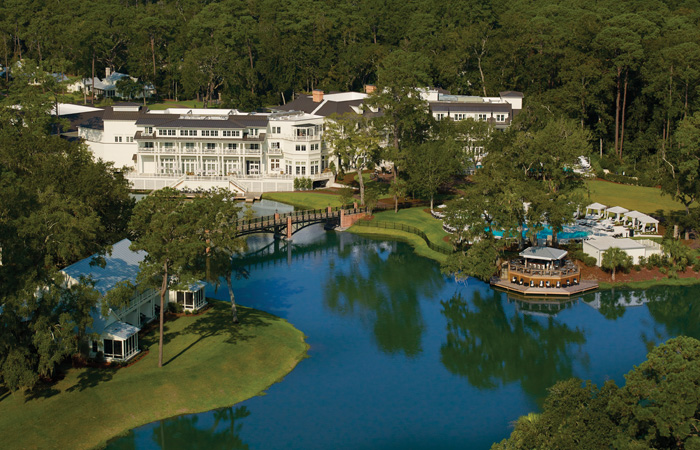 “Golf is meant to be fun and to be played with family and friends. I think Jack did a really good job of putting that into play here,” Wrobel said. “It’s not overall difficult, but it wasn’t meant to be, it’s a beautiful design in a beautiful area.”

Wrobel and his staff holds weekly golf instruction clinic to help resort visitors and full-time members get the best out of their game in one of the best settings. With the setting on the May River, it’s not surprising water is a big player on the course, where wetlands guard the sixth, a downhill par 3 across the marsh, and the marvelous par-4 seventh, with its island fairway and delicate sliver of green carved gently into a nook between the marsh, forest, and a man-made promontory.

In fact, of the four par 3 holes on the course, water is a big feature on three of them, with only the par 3 17th having sand, and lots of sand, only.

One of the most interesting holes, especially on the back nine is the par 4 10th hole, which tips at 556 yards from the back tees. It has plenty of bunkers and moss-draped trees on this slight dogleg right as most do on the course, but the natural channel of the river comes into the right side of the greens. Because of the changes in the tides, there are parts of the day where the water recedes and all you see is a marshy swamp. Other times, the water comes right up to the green and its becomes a real hazard to any misplaced approach. Of course, the par 3, 169 yards from the back, has a large lake to the right of the green, which is always willing to grab your misplaced shots.The par 5 18th hole has a large lake all along the left side, making your final golf test a potentially scary and watery one.

But the low slung, country style clubhouse is there in the background the greet you and offers you plenty of sweet tea, fried pickles, and chips, plus other Southern treats to celebrate or commiserate your round. There are home sites on the course, but they greatly lay back from most of the holes and not encroaching with the isolated character of each hole, contributing to the sense that you’re on a journey through nature. 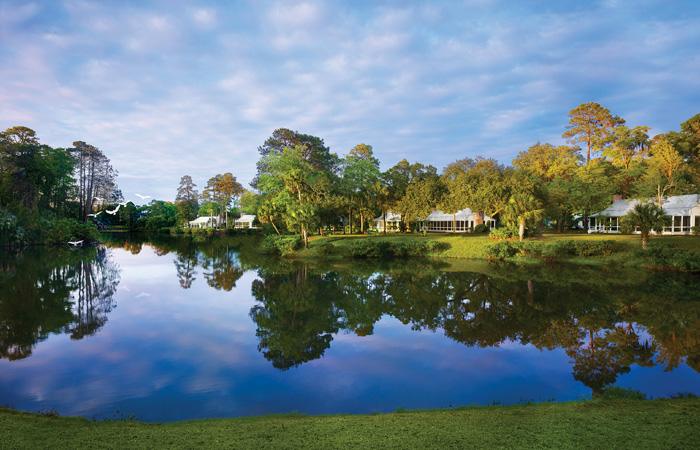 Wrobel said the May River course does just a little over 10,000 rounds a year, a much smaller number than some of the more famous courses in the area, but which is by design. Of course, on a property this large, golf is far from the only thing to do. There is nothing more comforting and Southern than a bucket of crispy fried chicken at Cole’s, along with fried pickles and chips. Then take a walk about 30 feet over to the high tech, self-scoring indoor bowling alley with big screen TVs in every direction.

Usually just open on the weekends, but it jazzed up ole time fun with your friends with plenty of drinks to make it seem even funnier, plus plenty of televised professional and college sports so you can see how it’s really supposed to be done. Other dining options include Buffalo’s and its famous biscuit bar in the morning, plus the Fore and Aft and the upper class Canoe Club which serves a variety of fresh water specialties. Of course, the South features more sporting choices than just golf or canoes. There is the new Palmetto Blue Shooting Club with 13 sporting Clay Stations over the 40-acre forest along with a covered five-stand shooting station.

Not surprisingly, Garden and Gun magazine is included on the nightstand of each of the luxurious rooms at the resort. The Spa Montage is stationed on the first floor of the hotel if you need more relaxation from you shooting, water or golf actives. Another fairly new addition is the 173-acre Longfield Stables where guests can experience anything from prolonged trail rides, pony activities, and guided tours. There is also help for all types of guides, first timers to experienced riders. Of course if your style is just roaming the many streets, squares and hidden trails of Palmetto, which has just about anything else you could imagine, treehouses to tennis courts, then there is plenty of see and do, or perhaps just do nothing at all. There is even a neighborhood coffee house, gas station and meeting spot, RT’s Market, where the coffee is always hot, the ice cream is hidden in the back corner and there are all manner of Southern snack treats.

Of course, the crowds, the shops and the restaurants of Hilton Head are just a dozen miles away. But when you travel the winding road past the guard house, Palmetto Bluff and the Montage seem far, far away. If fact, to use a local marketing slogan which borders on the accurate, time relaxes at Palmetto Bluff. Low Country luxury never seemed so good.