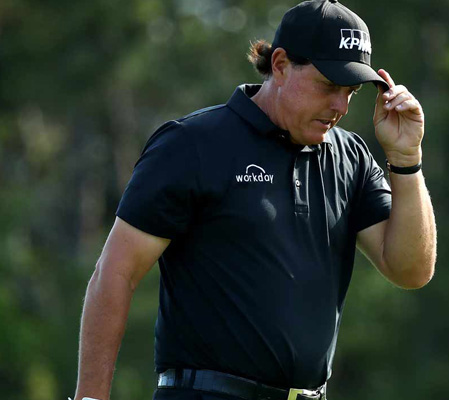 The latest suspicion involves using a company that schemes of bribing college officials to accept students via a nice sweetener. Several celebs are linked.

“Go ahead, I know what you’re gonna ask,” he told the assemblage. One reporter got halfway through a question about Mickelson being named in this week’s college admissions scandal before Phil himself took over to explain his family’s connection to one of the parties involved, ringleader Rick Singer, and deny any wrongdoing.

“We, along with thousands of other families, hired he and his company to help us guide through the college application process,” Mickelson said. We’re probably more shocked than anyone and we’ve been dealing with it the last few days, but that’s about it.”

Singer, he said, came “highly recommended by numerous friends,” and was enlisted to help each of Mickelson’s three children navigate the college process.

“We’ve been using his company for three years, know, tutors and we’ve looked at three dozen colleges based on his recommendations, so his company has helped us through this whole process, because it’s been confusing.”

As a parent, I know college is one of those necessary evils we all have to navigate. Most parents will do anything possible to insure admission into a desired college. The brainwashing of college learning continues infiltrate our minds. To wit, using tutoring firms to help elevate SAT/ACT test scores is fairly common. So, as a parent putting two kids through schools of higher learning, I tend to believe Phil on this one…

On Tuesday, federal prosecutors charged 50 people in what they called the “largest college admissions scam ever prosecuted by the Department of Justice.” According to the New York Times, scores of parents paid millions in bribes to help their children get into schools through various avenues, including manipulating test scores, paying to secure admission or faking athletic abilities, according to the New York Times

Share: Mickelson Claims No Wrongdoing In College Admissions Scam: ‘We Are Shocked”